Three passengers say they were kicked off a Spokane bus for discussing bisexuality. 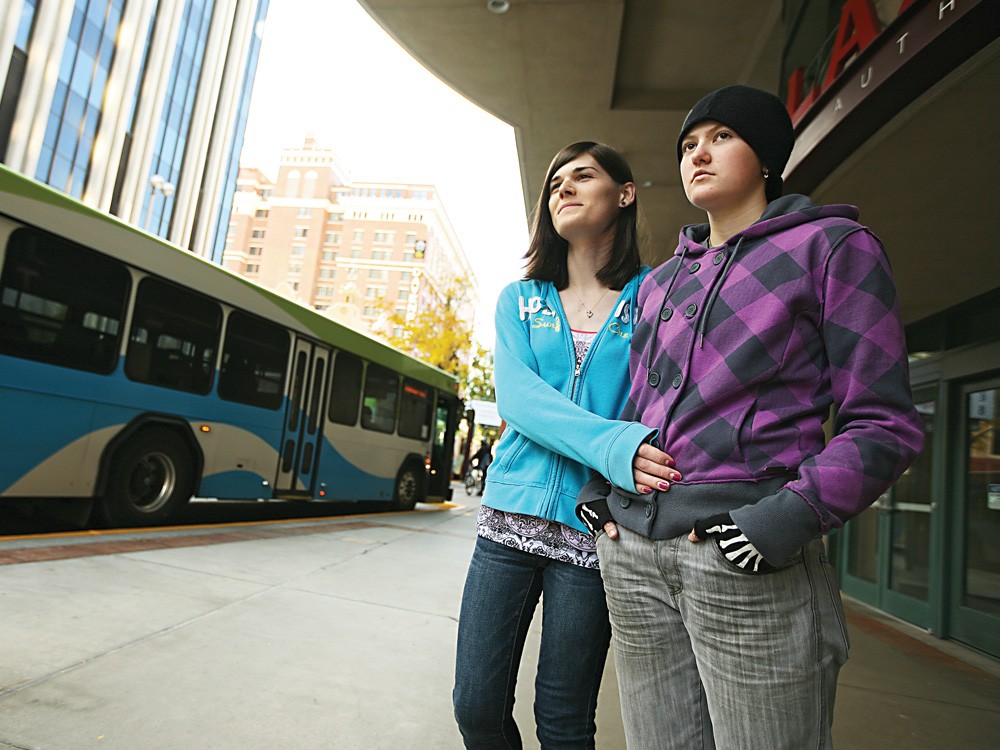 Nor did Jessica Jahn, 21, and Kaitlyn Bahn, 24, who were with him. They are all transsexuals — born one gender but taking hormones to become the other. And they all say they were kicked off the bus in the middle of a South Hill neighborhood, a mile from their bus stop, for discussing bisexuality.

Yet, the riders say that their conversation was never explicit or offensive — unless the words “bisexual” or “queer” are offensive — and that by the time they were actually kicked off the bus, there were no other passengers onboard.

“I know she broke the law,” Jahn says of the bus driver.

According to a short statement issued by the STA Monday, the driver “asked three teenagers to leave the bus because she believed the content of their conversation, which could be heard by other passengers, was not appropriate on the bus.”

There are audio and video recordings on the bus, but STA spokeswoman Molly Myers says that they’re geared for the bus driver and do not show everything. Myers either said she didn’t know or declined to answer several other questions, such as who was investigating the incident, how long the driver had been working for the STA, or whether the driver had been notified The Inlander wanted to interview her.

Even if the bus driver wanted to tell her side of the story, she couldn’t — Myers says drivers are banned from being interviewed. “It’s not an official policy, but it is a directive from the CEO [Susan Meyer],” Myers says.

According to the three riders, they got on a bus downtown heading to Jahn’s house on the South Hill around 1 pm on Oct. 20.

Their first mistake, Jahn says, was sitting too close to the front of bus. Jahn says she’s seen a lot of things on the bus: drugs, yelling, racist remarks. But most of the time, she says, the people were sitting far enough in back that the driver never noticed.

This time the three passengers sat close enough that the driver could hear their conversation. They say the driver overheard Jahn talking about how her landlord felt about her house filling with gay people — right as the bus grew quiet. Sensing the awkward moment, Jahn says she turned to the rest of the people on the bus and said loudly, “In case you haven’t noticed, this is the queer corner of the bus.”


The rest of the ride, Bahn says, conversation was only loud enough to be clearly audible across the aisle. A few minutes later, Jahn commented that she was bisexual. The driver told them that their conversation was inappropriate in public.

They asked the bus driver if she was talking to them, and if they were breaking a rule. The bus driver said yes.

Doug Honig, a spokesman with the American Civil Liberties Union of Washington, says he isn’t familiar with the situation. But, he adds, the conversation didn’t appear to be inappropriate.

“Merely mentioning you’re bisexual wouldn’t appear to violate [the rules],” says Honig. “Generally, you have the right to express your speech in public.”

On the bus, Jahn looked up the Spokane municipal code on her iPhone to check the driver’s claims. As soon as the bus emptied of everyone else, Jahn asked if the three could continue with their conversation — noting there was nothing in the municipal code that said they couldn’t.

The driver, according to Jahn, said it didn’t matter: The driver was offended. The three riders asked the driver about her religion and accused her of being discriminatory.

A mile from their intended destination, the driver kicked the riders off the bus. The three repeatedly asked for the driver’s name or identification, Kellogg says, but the driver would only give the bus number.


Within two days, STA had received three separate complaints about the incident. One from Jahn, one from Kellogg’s mother telling the STA that she was pursuing legal action, and another from Carla Savalli, executive director of the Odyssey Youth Center. At Odyssey — an organization supporting Spokane’s gay, bisexual, and transgender youth — all three wrote up formal complaints about the incident.

Savalli was contacted by STA quickly. It took a week for Kellogg’s mother to hear back. And Jahn says she still hasn’t heard any response.

When Savalli heard the story, she says she was shocked.

“This is unacceptable as far as Odyssey is concerned. They paid for a ride they couldn’t complete,” Savalli says. “One of the biggest expenses Odyssey subsidizes is monthly bus passes.” Generally, Savalli adds, Odyssey youth have a very good experience on the bus.

“Frankly … I think they’ve been extremely responsive,” Savalli says of the STA.

At the time of the incident, Jahn says she simply wanted an apology. Not anymore.