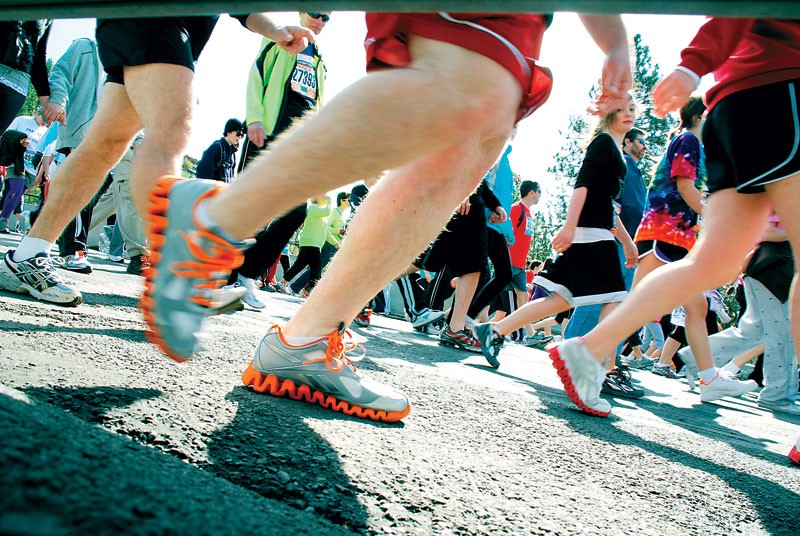 Tammy Marshall
Bloomsday is famous for T-shirts and sore knees, but with a whole-body approach, you can minimize the pain.

During last year’s Bloomsday run, 110,176 knees crossed the finish line. One can only imagine how many of those knees were in pain, especially considering that so many people suddenly ramp up miles to prepare for the course. It was that type of mileage increase that got Jason Gillmer into trouble when he competed in his first marathon, the Cowtown Marathon in Fort Worth, Texas, last year.

“Around Mile 20 I took a turn and realized my knee hurts. And it really hurt the rest of the run,” he recalls. He had an intense pain on the outside of his knee. “I took some time off, but when I moved up to Spokane, I decided I wanted to run the Colbert Half-Marathon. I went back to my old training and I ran too far, too fast without slowly building up.”

He ran the half-marathon with his wife but was miserable most of the way with knee and even some hip pain. Later, his knee pain became so intense that he had to stop and walk during one of his runs — something he never did. Gilmer sought help from Mike Lauffer, physical therapist and owner of B&B Physical Therapy in North Spokane. Lauffer specializes in running and biking injuries.

According to Lauffer, Gilmer was experiencing a fairly common knee problem among both runners and cyclists: “Pain just on the outside of his knee is known as iliotibial band [IT band] syndrome.” The IT band is long and fibrous and runs from the hip area all the down the outside of the thigh, eventually attaching right below the knee joint.

Lauffer says Gilmer’s pain was typical of many patients. “Commonly they have had pain in that area for some time but then they do something that really sets it off. Sometimes it is too many hills, especially running down hills or increasing mileage too quickly.”

Typically, pain caused from the IT band worsens when you run slowly, according to Lauffer. “When you are running slowly, you are not activating your hip muscles as much and you shuffle along with your knees bent [rather than] pushing off with your strong buttock muscles. This irritates the IT band.”

Lauffer often finds that runners and cyclists have weak hip muscles because they only move in one direction, unlike soccer and basketball players, who are using their outer-hip muscles to move side-to-side. Hip and buttock weakness can cause the pelvis to tip side to side when running, which stresses the IT band. Knock knees, flat or wide feet and weak trunk strength can also cause problems.

Lauffer evaluated Gilmer and examined a video of him running and found that Gilmer’s pelvis indeed tipped up and down. To fix it, he needed to strengthen his hips, buttocks and core as well as stretch his IT band.

Initial treatment consisted of deep tissue massage of Gilmer’s IT band. On his own time, Gilmer was instructed to use a foam roller to “roll out” his IT band. Lauffer also assigned him a number of strengthening exercises with a big rubber band, which Gilmer still uses to maintain strength.

One of the important points Gilmer learned was that “there are actual strategies to running. It’s not just putting on shoes and moving [my] feet faster, but concentrating on my running technique such as increasing my knee bend, and not shuffling.”

Did he run the Cowtown Marathon again? “I did, and I ran a personal record by about 20 minutes with no knee pain.”

Marie Cole is a physical therapist and instructor in the PT assistant program at SFCC.