The return of Doyle's Ice Cream Parlor. Plus, cupcakes on Garland. 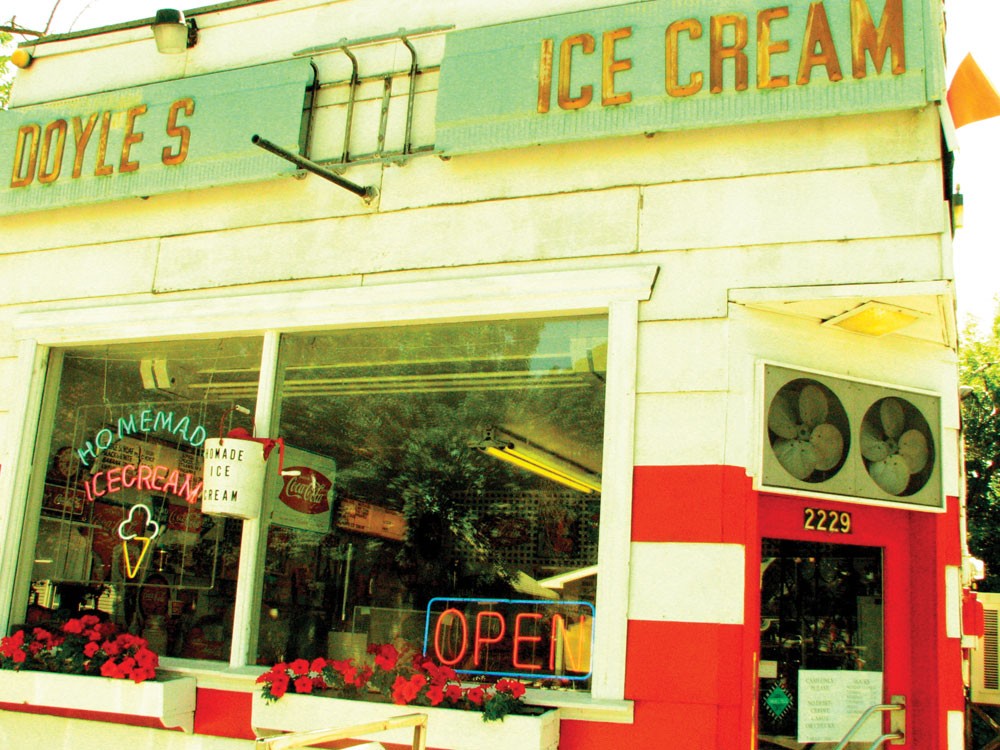 Shannen Ortale
Memories by the scoopful at Doyle's

Time stands still at Doyle’s Ice Cream Parlor. So does the line. Not that service is bad — Doyle’s is just incredibly popular. And it’s August.

Modest in stature but dandy in spirit, the red-striped building at 2229 W. Boone Ave. garnered throngs of West Central patrons long before owner Jerry Gill closed up shop for a two-year hiatus.

Since reopening this month, business is churning — more than Gill expected.

The draw of this place — in addition to the ice cream — is nostalgia. Doyle’s is a neighborhood time capsule, neatly tucked between old homes with sloping porches, safe from imminent development.

The pace here is refreshingly indifferent to the rest of the world. Doyle’s doesn’t have a phone number. And they accept cash. Only.

There’s also one employee — two, at most — behind the counter.

So be patient while you wait for your milkshake ($3.75; swirled together by a classic pastel-green Hamilton Beach mixer), Awful-Awful ($5; a vertical banana split) or for the kids in front of you to count out piggy-bank change to pay for their sundaes ($3).

What Doyle’s lacks in space it makes up for in ambience with checkered flooring, cushy red bar stools, a slew of classic Coca Cola ads, the original Natatorium Park fortune teller (slightly eerie, like the one in Big), plus several display cases stashed with toy relics to take baby boomers down memory lane.

Gill says the building — accounted for in city directories since 1929 — has been a barbershop, a candy store, a beauty salon and a furniture store.

How anyone sold furniture in a space that small is best left to the imagination.

Outside, a grassy nook is quaintly accented with flowers, white fencing, a few tables and umbrellas. A Chronicles of Narnia-esque lamppost protrudes from the middle of the yard, and a lackadaisical cat can often be spied lingering nearby.

As for the ice cream, the employees must have beefy carpal muscles. The sweet stuff is super-thick, made using antique 1940s equipment.

“The things are built like tanks,” says Gill of his machinery. “They’re indestructible.”

In addition to classic phosphate pops ($1.75; this must be the only business in the city with a vintage gooseneck soda fountain), interesting ice cream flavors include black licorice, Hawaiian delight, spumoni and cotton candy (single, $1.75; double, $2).

Fresh Banana tastes like it came right out of the peel, and Razzle Dazzle lives up to its name. Chocolate Thunder is good if you enjoy the taste of Hershey’s syrup, and Coconut Almond is light and subtle.

At the table next to us, a little boy mows down on a scoop of the Bubble Gum.

“You’ve got a Smurf nose,” his dad says, wiping away some of the robin’s egg blue.

“You did that,” his dad explains.

Gill says it’s good to be back.

“It’s been nice seeing the old customers back again, too,” he says. “They didn’t forget about me.” (Blair Tellers)

For rookie confectioners Mike and Christina Levinson, concocting the perfect cupcake recipe has been … explosive. “I opened the oven and was, like, ‘Oh, expletive,’” says Christina, recalling the ill-fated would-bes of husband Mike’s first test run. “I said, ‘Boy, this is gonna be a long haul if you’re gonna blow up batches of cupcakes.’”

After owning a software development company for 20 years, the Levinsons are satiating cravings for career changes. They recently opened Celebrations Bakery (“A Cookie & Cupcake Boutique”), at 713 W. Garland Ave.

“Mike asked me one day when I was sick in bed, ‘What business do you want to own?’ remembers Christina. “And I said, ‘A pet spa.’”

She changed her mind 30 minutes later.

Experimental mishaps aside, the two have discovered dulcet nirvana. They can hardly bake fast enough to meet growing demands for their dainty delectables, which were selling out prior to Celebrations’ grand opening during the Garland Street Fair on Saturday, Aug. 14.

Frosted in alternating stripes of sugary pink and mocha brown, the building’s exterior looks like a gift bag. The storefront is cozy, with a few tables for outdoor seating.

From white-chocolate-dipped gingersnaps to Nanaimo Bars to snickerdoodles dipped in lemon white chocolate, the cookie selection here tantalizes from behind a glass case (plans for espresso beverages are also in the works).

But it’s the cupcakes — a pizzazz-y lineup with fluffy novelties like root beer float, orange Creamsicle, maple and bacon, Almond Joy, peanut butter cup, red velvet, banana split and lemon raspberry (many of them plump with moist fillings) — that put this place on the map (a gourmet dozen costs $20).

“I’m on the ‘fat by 40’ plan,” jokes Christina. “I eat cupcakes all day. You have to taste your work … but I find myself taking that one bite and then eating the whole thing.”

I don’t blame her. I bought a box to taste and share with friends. The sharing … didn’t happen, so much.

After licking remnants of whipped buttercream frosting from your fingertips, your taste buds won’t settle for grocery-store gut-bombs ever again.

The Levinsons like to be challenged with off-the-wall orders, so keep that in mind next time you’re planning a baby shower or risqué bachelorette party.