Vegans, vegetarians and meat-eaters can all meet at Mizuna 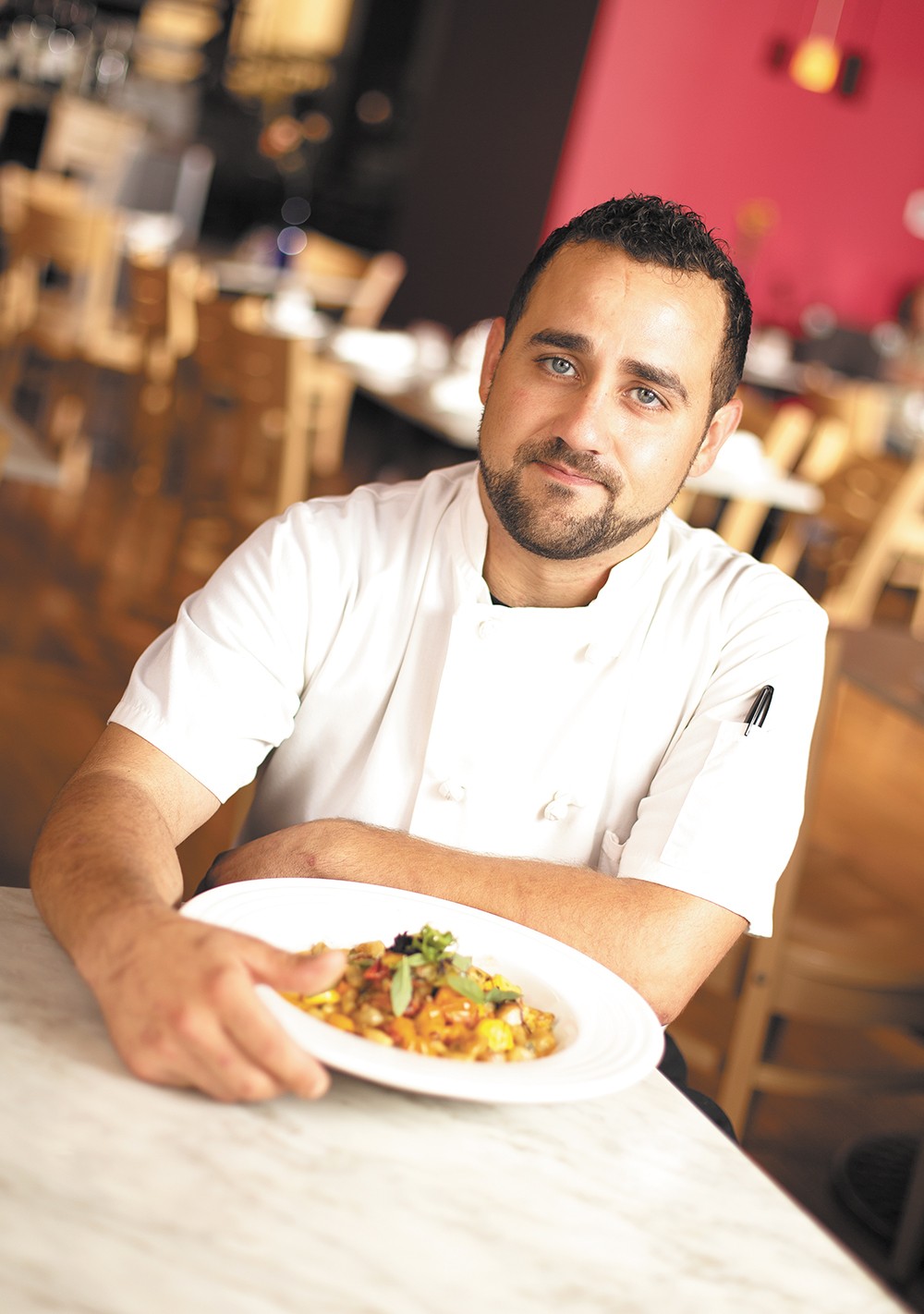 It's sort of ironic that Tyler Reynolds

works at one of Spokane's earliest and most-beloved vegetarian restaurants.

"I actually come from a very meat-based environment," says Reynolds, executive chef at Mizuna, which has over the years expanded its menu to include animal proteins, although they also focus on not only vegan/vegetarian food, but also organic, sustainably sourced products and a knack for being sensitive to dietary needs of diners.

Reynolds grew up on the Palouse "where hunting and whole-animal butchery was a way of life.

"A lot of the food we ate came from right outside the door or from the pantry that held our preserves," he says.

However, says Reynolds, he spent most of his youth rejecting that way of life.

"I didn't want to be stuck on the farm. I hated hunting. I was a rebellious, political punk rocker and an artist," says Reynolds. "I just did not know what my medium was."

Turns out it was food.

Like many in the business, Reynolds started as a dishwasher — at the Harvester in Spangle, Washington — moving his way up the ladder and across the spectrum of restaurants: Blue Fish, Europa, Churchill's Steakhouse, Vin Rouge and Maggie's South Hill Grill. It was at the Mustard Seed that he met future Santé owner/chef Jeremy Hansen, whom he'd accompany to the prestigious James Beard Foundation dinner in 2013.

"After running the kitchen at Santé for three years," says Reynolds, "I took my first executive chef position and the challenge of applying what I had learned about technique, texture and flavor to the loyal and rapidly growing vegan and vegetarian clientele at Mizuna."

When he's working — which is most of the time, admits the young father of a five-year-old — he eats vegetarian, including raw foods.

"I do understand the ethical reasons for being a vegetarian," he says, "And even more so being a vegan. However, I do believe there are ways to be an ethical omnivore. And that the key is responsible sourcing of meat. It can be much more difficult to source, what are, in my opinion, ethically raised animals for consumption. But the benefits in nutrition, sustainability, and flavor are unbelievable."

For Reynolds, it comes down to balance and, ultimately, ensuring that the customer gets the very best he and his staff are capable of providing.

"I have to know that whatever I serve is getting to the table as delicious as possible," he says. ♦ 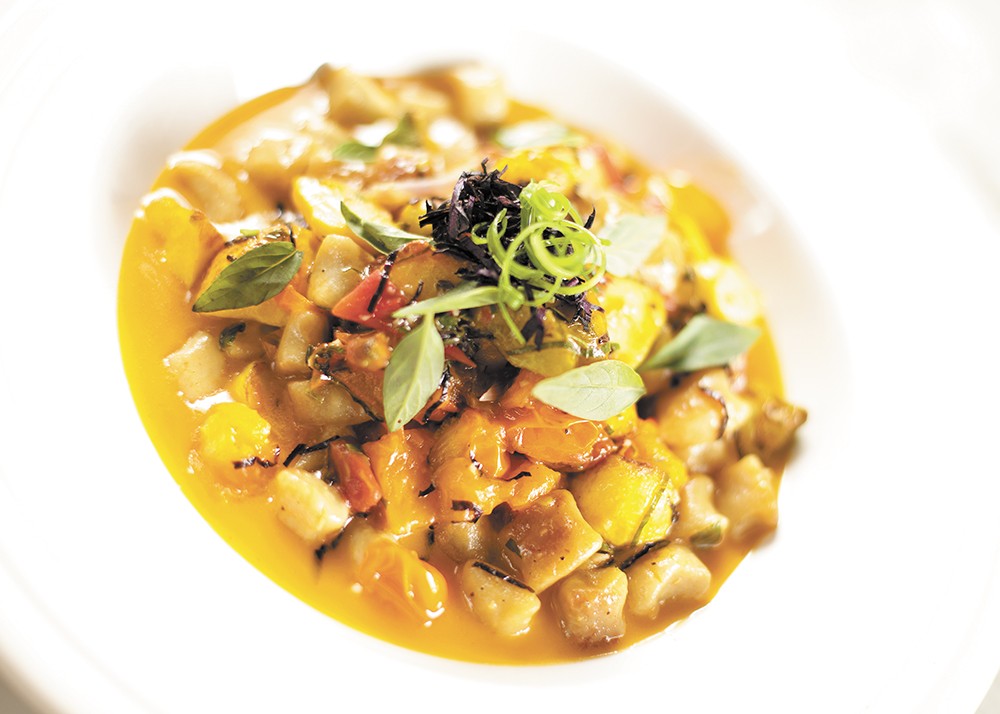 "This dish binds some of the best ingredients around together perfectly," says Chef Tyler Reynolds. "It's a dish that is somehow both hearty and light, just by using fresh tomatoes and basil."

Note: To make gluten-free, use chickpea flour instead of all-purpose flour, adjusting ratio of dry ingredients as needed to form dough

1. In a saucepan, cover soaked chickpeas with water allowing about an inch of water above the chickpeas. Bring to a boil over medium heat. Turn down heat and simmer until soft. If substituting canned chickpeas, they still need to be cooked and the yield needs to be about 3 cups cooked.

2. Meanwhile mix 3 cups of the flour with the cornstarch.

3. Strain cooked chickpeas and puree in a food processor with the oil.

4. In a large mixing bowl, mix the chickpea puree (mixing while still warm makes a fluffier gnocchi), egg and flour/cornstarch mixture into dough by hand. Add additional flour as needed, until dough no longer sticks to your fingers. Don't overmix!

5. On a floured cutting board, roll out pieces of the dough into 3/4-inch logs using the palms of your hands. Cut logs into 3/4-inch square pillows (or use a gnocchi board).

6. Drop the gnocchi gently into the boiling water (salt optional) and let cook until they have floated for about a minute.

7. Scoop out cooked gnocchi and either put directly into sauce or let cool. Cooled gnocchi can also be pan-seared in the same pan in which you build the tomato sauce.

1 cup zucchini (or other summer squash),

Optional: salt and pepper to taste,

1. In a large sauté pan, heat half the oil on high.

2. If searing the gnocchi before adding to the sauce, add them once the oil is hot, let sear on one side for one minute, then turn.

4. Sauté on high for 60-90 seconds to let all the ingredients bloom and release natural liquids.

5. Deglaze pan with the white wine and bring to a simmer, then reduce heat to medium-low.

Add remainder of the oil and optional ingredients if you're using them.

6. Cook on medium-low until sauce coats the back of a spoon.