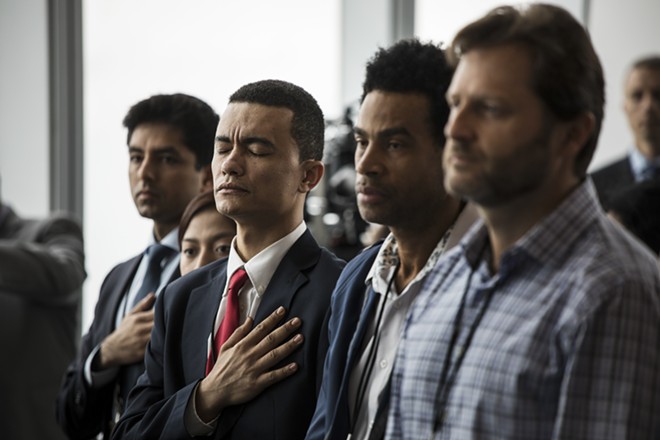 Todd Heisler/The New York Times
A naturalization ceremony at the held in the One World Trade Center observatory in Manhattan, Aug. 15, 2017. The Supreme Court’s conservative majority seems ready to allow the Trump administration to add a question on citizenship to the 2020 census, which critics say would undermine its accuracy by discouraging both legal and unauthorized immigrants from filling out the forms.

WASHINGTON — The Supreme Court’s conservative majority seemed ready Tuesday to allow the Trump administration to add a question on citizenship to the 2020 census, which critics say would undermine its accuracy by discouraging both legal immigrants and those in the country illegally from filling out the forms.

Justice Sonia Sotomayor said that adding the question would do damage to the fundamental purpose of the census, which is to count everyone in the nation. “There is no doubt that people will respond less,” she said. “That has been proven in study after study.”

The case, the latest test of executive power in the Trump era, appeared to divide the court along the usual lines, with its five conservative members poised to defer to the administration and Sotomayor and the court’s three other liberal members ready to question its motives and methods.

The court’s decision, expected in late June, will be consequential. By one government estimate, about 6.5 million people might not be counted if the citizenship question is allowed. That could reduce Democratic representation when congressional districts are allocated in 2021 and affect how hundreds of billions of dollars in federal spending are distributed.

Solicitor General Noel J. Francisco, representing the Trump administration, acknowledged the question could depress participation. But he said the information it would yield was valuable.

“At the end of the day,” he said, “if you add any particular question onto the census, you’re always trading off information and accuracy.”

How to strike that balance, he said, was a policy judgment properly made by Commerce Secretary Wilbur Ross. The more conservative justices appeared to agree.

But Barbara D. Underwood, New York’s solicitor general, representing states and localities challenging Ross’ decision, said the court should protect the accuracy of the census form given that information about citizenship can be obtained in other ways.

Justice Neil Gorsuch noted that questions about citizenship had been asked on many census forms over the years and were commonplace around the world.

“It’s not like anybody in the room is suggesting the question is improper to ask in some way, shape or form,” Gorsuch said.