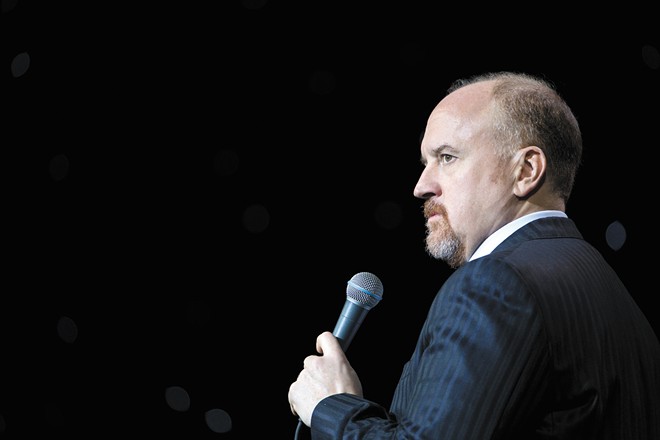 Louis C.K. is back headlining large theaters after a scandal briefly put his career on pause.

My aesthetic taste was shaped by horrible men.

It's something that became clear the past five years, as time and time again entertainers who were my faves growing up were revealed to be terrible, abusive people. Obviously, my internal mental struggle with this fact isn't even remotely comparable to the anguish inflicted upon their victims. It's just an upsetting idea to constantly juggle in the back of my mind as an arts writer.

If you asked what my favorite stand-up special and TV shows were in 2012, I would've answered Louis C.K.'s Chewed Up and FX's Louie. I'd become a fan of Louis C.K.'s humor after seeing him on Late Night with Conan O'Brien (where he formerly wrote) and watching his Comedy Central Presents half-hour. His style blended absurdism and biting anger in a way that hit my teenage sweet spot, and he honed that voice as his fame grew. When he'd rant against deer, Cinnabon or offensive words, it felt twisted and delightful. When Louie had episodes on bullying, relationships or his feud with Dane Cook, it felt honest and profound in ways shows that didn't straddle the line between comedy and drama rarely do.

In the moment, it felt like Louis was a vessel for catharsis. As a viewer, I felt like when he was yelling about his kids being a pain or his wife being difficult or some weird masturbatory material, it was a form of venting, a sort of I'm gonna unleash the unhappy thoughts that pop around in my brain in an amusing way so they don't hurt me or anyone else.

But as we now know, the gross parts were not merely part of the man's persona. Rather, it was a classic case of when someone shows you who they are, believe them.

After years of swirling rumors about his being inappropriate around female comedians, in 2017 the New York Times published a report on Louis C.K.'s history of sexual misconduct. Incidents included exposing his genitals to women, forcing them to watch him masturbate and describing sexual fantasies during professional situations. The lewd laundry list is even rougher to stomach when you realize Louis always portrayed himself as the meek, feckless loser. All the while he was exploiting and abusing women because he was the one who had all the power in their professional dynamics. His victims were hesitant to come forward because going against one of comedy's biggest stars, and the behind-the-scenes backing that protected him, was tantamount to career suicide in a pre-#MeToo climate.

I can't go back and enjoy any of Louis C.K.'s standup specials or Louie episodes because it's impossible to view them in a vacuum separated from how he hurt women. His voice and perspective casts a cloud over all of it. The old material could probably be mined to understand the pathos of someone who'd commit those acts, but that's a grim, laborious task.

And as someone who at a formative age was a fan consuming the content of someone who turned out to be this morally repugnant, I can't help but question what impact that had on my artistic worldview. I have to look in the mirror and ask the unsettling question of if what I was connecting to was actually the toxic, impotent, pent-up white male rage bubbling under the surface. Was I actually just attracted to the real venom?

It would also be easier if that was an isolated incident.

In the same time period, I would probably say my second favorite standup special was Aziz Ansari's Intimate Moments for a Sensual Evening, and I frequently listened to Chris Hardwick's Nerdist podcast and watched every episode of @Midnight. In 2018, Ansari faced allegations of sexual misconduct regarding levels of consent with a woman he went on a date with, while Hardwick was accused of having an emotionally abusive and coercive relationship with one of his exes. Neither rose to the level of Louis C.K.'s misconduct, and Hardwick was cleared by the media companies he worked with after investigations (though how often do such investigations ever really favor the women making allegations?), but I've still distanced myself from consuming their content ever since. It just doesn't feel like a laughing matter.

It's probably important to make clear the distinction between jokes and conduct. I have no problem with comedians pushing boundaries. Anthony Jeselnik's whole schtick is saying horrendous humorous things, but he's not harming actual people. I'm not a fan of comedians making gross punching-down jokes at marginalized communities because it's hurtful and lazy. Teenage Bo Burnham told gay jokes that wouldn't fly now, but he literally owns up to that with a song on Inside ("Problematic").

It's also been interesting to notice how different subcultures react to the actions of horrible men. As evidenced by Louis C.K. still booking major theater shows like Sunday's gig at First Interstate Center for the Arts, "Cancel Culture" isn't a thing. Really, it's "Face Very Minor Consequences Culture." Louis C.K.'s "cancellation" amounted to having to take a year off from standup and then playing slightly smaller theaters, having his questionable movie I Love You, Daddy pulled, and no longer being a voice in The Secret Life of Pets movies. Oh, what an unbearable burden for acting monstrously.

Many other men of his ilk face similar weak slaps on the wrist, if that. Alleged assaulter (both physical and sexual) T.J. Miller has four nights of shows booked at Spokane Comedy Club in November. Dr. Dre has an admitted history of abusing women and just got named the next Super Bowl halftime performer. Assaulting female icon Rihanna hasn't seemed to slow Chris Brown's career. Woody Allen and Roman Polanski are both still working directors. No one in Hollywood seems to care about Mark Wahlberg's history of assaults on people of color. Bill Cosby got out of prison for rape on a technicality. Folks still play Michael Jackson songs at weddings despite the mountain of evidence of inappropriate relationships with children. People were still bumping R. Kelly music at clubs up until he was found guilty of sex trafficking in September (one would hope they'd stop now, but who knows?).

The carnage left behind by so many of these male artists is hard to fathom. That might seem overblown to some, but we always need to empathize with their victims rather than feeling upset for the abusive millionaires who lost a couple of gigs.

I think the only way to move forward when you were culturally raised by these bad men is to not whitewash that past fandom. It goes beyond comedy too, as I haven't once listened to what was my all-time favorite band — Brand New — since 2017 after after it came to light that singer Jesse Lacey coerced underage girls into sexually compromising situations. I'm not proud of having loved Louis C.K., Brand New, et al, but I'm not going to pretend like that wasn't part of my own history either. Their jokes, songs and aesthetics are burned into my brain, and I need to deal with that when approaching any new art. I didn't ever do a mass social media cleansing — deleting all of the pre-allegation praises I sang of these problematic men. It's not much, but the least I can do is bear those mistakes like embarrassing, regretful tattoos.

As tiny a step as it seems, we can't strive to be better people than the artistic demons from our past until we acknowledge our own imperfections in the form of fandom flaws. ♦