What's the worst apartment experience you've ever been in?

Right now I'm in my first apartment in college. It would have to be that one: It's simultaneously the best and the worst.

So what's the worst thing about it?

My biggest problem is I just have really noisy neighbors, but that's the case with any apartment. I can hear their conversations basically and they can hear mine.

When I was a kid, I lived in a one bedroom tiny kitchenette that didn't even have like a stovetop. So we had a pullout bed, a microwave, a sink — we didn't have a shower or anything.

What was the most challenging part of that?

We just had, like Top Ramen. And I was a child. 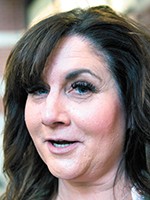 Well, it wasn't a bad apartment. It was the parking.

What was so bad about the parking?

It was an extra $50 dollars a month to park in the parking lot next to the apartment. It was kitty-corner to the Onion. It was like 1992. They didn't tell us the parking was extra.

Does it have to be an apartment? Or can it be a trailer park?

It can be a trailer park!

We were living in one, and some neighbors started harassing us. They started throwing trash in our yard. My dad was trying to take care of it. The cops ended up getting called one time, and nothing happened. We just ended up moving somewhere else.

I didn't live in apartments, other than once. I managed them!

OK, what was the worst apartment experience from an apartment you managed?

The only worse situation we had there was one guy fired a .22 off. Each floor had a shared washer and dryer. And I had just got done walking out of there, as I was washing a coat. And the bullet came through the wall. I actually found it. It was in the living room.