What was your worst or weirdest date?

I went to sushi, and I was really excited to take this guy to sushi, and he had one California roll, hated it, and refused to eat anything else and made us leave and go get pizza. And I love sushi.

Did the relationship work out?

Jeez, there are so many. My worst date would be, it was just a hang out. And I went and she had invited other guys over, too. Like, told me they were her guy friends and then I found out that they were just meeting her. So I left. 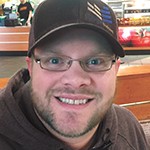 The gal I was on the date with was just talking on her phone the whole time. It didn't last very long and after about 10 minutes I was like, alright.

Were you at a restaurant?

Probably going out to dinner for the first time is the weirdest. Just because it's awkward.

Have any of the first dates worked out?

No, I'm super picky so it doesn't ever really work out.

I would say my worst date was a prom I went to and my date had to be home by 10 o'clock. So I ended up with my husband-now and his date, and I was the the third wheel. So, lots of fun.

Well it worked out then!