I was in Santa Cruz and we went out early and there's lots of green beer and all of that, but the funniest thing was at the end of the night when all the bars were closing there was a guy in a huge styrofoam shamrock costume that was running throughout the town creating mayhem, like he was riding in a shopping cart, pushing around other people, he might have been singing, he did cartwheels.

I was at a house party, and there was a big clear bucket full of punch alcohol. It was a costume party, too, but I didn't really have a costume, so I brought my football gear and I duct-taped a funnel into it. And they made me chug four cups of that ... And after a game of beer pong I blacked out and woke up with one shoe. 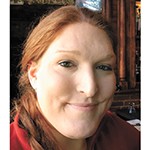 I don't really have one, I come from a small town.

How do you usually celebrate St. Patrick's Day?

Probably spend time in a little local bar, that was kind of my favorite place to hang out. I always am interested in people, I like people a lot... And usually in places like a small town during St. Paddy's everyone comes out of the woodwork.

There was a bunch of us that were here, when Cyrus O'Leary's was still here, and so we left [to come] here [to O'Doherty's] because Cyrus was too busy... Left for the night, came here and sat and checked IDs all night at the door with the bouncers.

My most memorable is with my best friend, my birthday is March 11 and hers is the 20th, so for our birthday we would celebrate together during St. Paddy's Day weekend, so therefore we would come down to the parade, 'cause that's what we'd do as kids, and after go hang out and then go to bars and we'd actually come here [to O'Doherty's].