What important stories is the media missing?

I think the media could do a better job covering, you know, an average Joe's perspective on pretty much everything that's in the news today; you know, not some campaign manager who's already getting paid to be dedicated to something.

There's a lot of political conversation going on and a lot of awareness and political news. Where I think that focus is a little bit off is in terms of what actually affects people's lives. For example, Congress just voted to make it almost impossible for individuals to sue banks, while it's incredibly easy for banks to sue individuals. 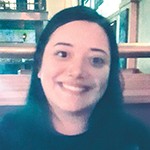 Honestly, I don't really watch the news, I know the big things that are going on from Facebook — but I don't participate in the rhetoric of whatever they want you to know.

Do you trust the news?

The story that's not being publicized is that Elon Musk offered to re-energize Puerto Rico — Elon Musk and his organization talked about how their renewable energy package is infinitely expandable. Now, they are having these guys from Montana — it's, like, two guys in Montana have a company that are going to do it. Do you understand how stupid that is?

There's a lot more coverage on pop culture, when there's a lot of things going on with this country. We have another issue with North Korea — are they going to get us into another war? It's like, hey, look over here at this little puppet, but there's all these other worldly things going on.