What surprised you about President Trump's first year in office?

I was surprised he didn't get Obamacare repealed.

Do you think it should be repealed?

Yes, because the way the rates on families have gone up. In some places it's doubled. I'd also like to see the budget passed and the government reopened. [Congress passed a short-term spending bill just hours after this interview.]

Nothing. When you have a Republican-run government, all those policies are what they've been working on for years. So no surprise.

Is there anything you'd like to see this administration do?

No. Inaction is the best we can hope for right now. 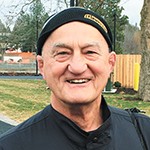 It surprises me that he's still in office and he hasn't been impeached yet. I know it's a slow process, but the investigation I believe is ongoing, is extensive, it implicates the Trump family, members of Congress, big business, corrupt Russians — it's just widespread and it's unimaginable for a person my age to have to experience something like this.

I guess maybe how well the economy is picking up, and that could be through natural cycling, but I also feel the emphasis on rebuilding the infrastructure is really helping the economy. All the steel and cement and natural gas.

What do you think he has accomplished?

From what I've read, it seems like he's accomplished making the rich richer.

INTERVIEWS CONDUCTED BY MITCH RYALS AT RIVERFRONT PARK AND ATTICUS