Brimo Nyinkuany escaped violence in southern Sudan and resettled in Spokane. Now he's looking to give back 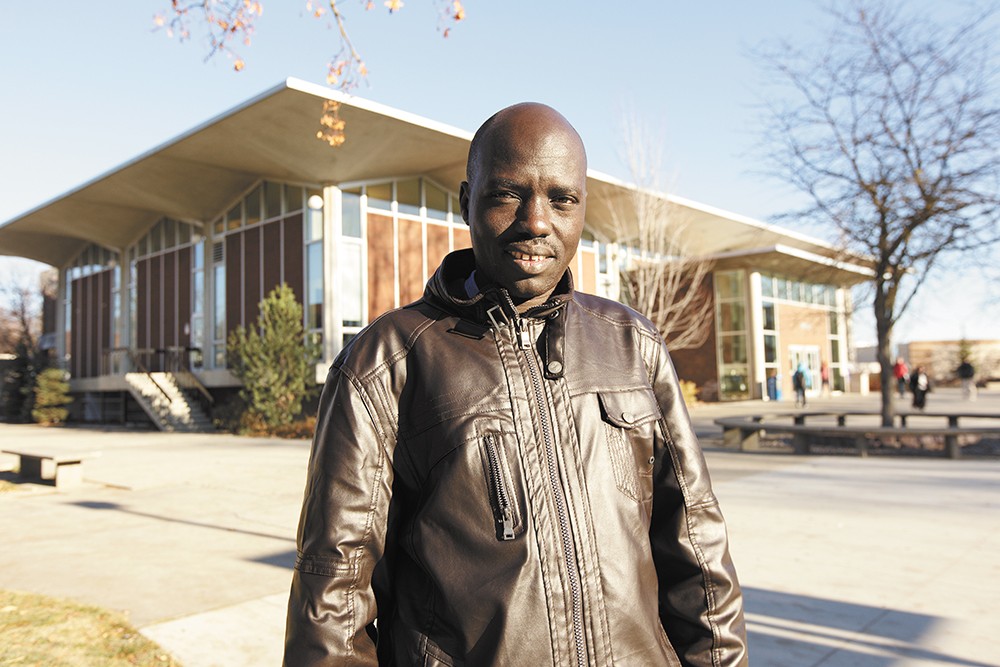 He walked 3,000 miles barefoot beneath the equatorial sun,

across valleys and deserts and mountains, until his feet were cracked and numb.

He recalls being stung by a scorpion on the palm of his hand while he slept and left seething in pain on the side of the road. It took 90 days for Nyinkuany and the other villagers to reach the United Nations refugee camp at the Sudan-Ethiopia border. He remembers traveling with a group of 400 people. Fifty died of hunger, thirst or disease on the way. One hundred turned around.

As a child, Brimo Nyinkuany learned how to survive.

Now, two decades later, having escaped political instability and violence in southern Sudan and resettled in Spokane, Nyinkuany is ready to return to his village in hopes of saving the lives of others.

Nyinkuany recently started the Koyom Sanitary and Hygienic Initiative, a nonprofit named after his village, aimed at bringing clean water infrastructure to 25 rural areas in South Sudan in order to halt the spread of deadly waterborne diseases. Every dry season, Nyinkuany says, the people in his village live in fear.

Between 1983 and 2005, the Second Sudanese Civil War killed 2 million people and displaced twice as many. Nyinkuany was among the displaced — a "lost boy." In the summer of 1987, Nyinkuany's village in southern Sudan was attacked by Sudanese government troops. When machine-gun fire rang out, everyone ran — his siblings in one direction, he in another.

"It was absolutely remarkable that he survived, and the kind of faith he had that things would turn out alright," says Susan Hales, the executive director of Refugee Connections Spokane, who is advising Nyinkuany on his clean water project. "I've just been so impressed with how much he has been able to accomplish so quickly, and his visions for what can happen when he gets the support that he needs."

Nyinkuany, 32, arrived in Spokane 10 years ago through World Relief's refugee resettlement program. Tall and lanky with dark marble eyes and a toothy smile, Nyinkuany is studying for his two-year degree in public administration at Spokane Falls Community College and working at Northern Quest Resort & Casino on the weekends. He's currently living with his niece, her six children and another refugee in a small four-bedroom house in North Spokane.

It was 20 years before he saw his siblings again. When he returned to his village, it seemed nothing had changed. People were still struggling without access to education and modern medicine. They still drank from stagnant pools of water in the Nile River deltas, got sick and died. Cholera killed eight people in his own family.

"It is very frustrating. It is heartbreaking," he says. "If nobody has brought anything to help these people, why can't I try to do something?"

He's laid out his expenses in a spreadsheet: He needs water hand pumps, windmills, pit latrines, mosquito nets, office supplies and computers. He is hoping to raise $105,000 to fund his project.

"In my country, they say it takes one child to rehabilitate one village," he says. "It would be wise for the one child to give back to the people who raised him." ♦

You can help Brimo Nyinkuany bring clean water to his village by attending a fundraiser at the SFCC Student Union Building this Saturday, Nov. 22, from 1 to 3 pm. You can also donate to the Koyom Sanitary and Hygienic Initiative at any local Wells Fargo location.