One month in, we can now view Gonzaga’s schedule with objective data

We are now more than one month into the college basketball season. Enough games have been played that casual observers and critical viewers alike can now make reasonable estimations of which teams are good and which teams are bad, and can evaluate every team in between. Case in point, the NCAA released the first NCAA Evaluation Tool (NET) Rankings of the season last week. That’s what the NCAA uses above all else to select and seed the field of teams that competes in the NCAA Tournament.

The NET Rankings are not the only metric that goes into selecting and seeding the NCAA Tournament, but they are the most important and most highly valued. With a month of games behind us, and some real rankings to look at, now is the first time all season that Zag fans can really dig into their team’s NCAA Tournament résumé.

So, let’s do exactly that. Where, a month in, do the Gonzaga Bulldogs stand?

The Zags, through 10 games, are in full feast-or-famine mode. They’ve played four Quadrant 1 games and six Quadrant 4 games. The quadrant system is a sliding scale that gives more value to road and neutral games than it does at home, but it attempts to determine whether or not a specific opponent is good or bad based upon where the game was played. Gonzaga versus Alabama in Seattle was a quadrant 1 game, but Gonzaga against Central Michigan in Vegas was a quadrant four game. Road games tend to be more valued than neutral, and both are more valued than games played at home.

Gonzaga was supposed to play Washington, an in-state rival, over the weekend, but that game fell through because the Huskies had cases of COVID and contact tracing force their team into isolation. Does the lack of that game matter to the Zags this season? Not really. For rivalry reasons, the game's cancellation was a bummer, but not playing Washington might actually benefit Gonzaga. The Huskies are terrible. They’ve been awful for a few years now, and they’re as bad as ever right now.

That game against Washington would’ve been a game against a quad 4 team. Washington may as well be Dixie State or Alcorn State or Bellarmine or Central Michigan. The Zags’ résumé might have actually improved by not having to face them. To all the Gonzaga fans who are bummed about that rivalry game going by the wayside, take solace in the fact that your rival is so bad that not playing them at all probably helps your team. That’s how bad Washington is.

So, how is the rest of Gonzaga’s résumé?

Well, looking at the most recent NET data — and keep in mind this updates every single day throughout the season — the Zags have a pretty strong slate of games to build from, even without Washington on the books. 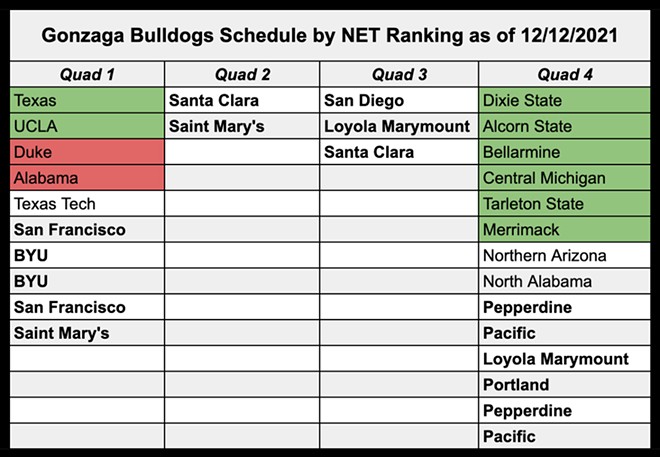 What this table should show you is that the West Coast Conference will provide most of Gonzaga’s good opportunities. Of the Zags’ 12 quadrant 1 and quadrant 2 games, eight come within league play. For a team that is known for its willingness to play anyone, anywhere, anytime, to get that many opportunities within league play is uncharted territory. The WCC normally cannot provide that amount of quality inventory for the Zags, but this year it can. And this year, perhaps, Gonzaga is better than it’s ever been. Past teams would have loved to have all of those opportunities, but for this year’s team they’re just a few more speed bumps along the path.

For now though, the Zags have navigated less than half of their Q1 games. Normally, they would have had all of their chances to pick up big wins. This year, they’re not even half way there yet. It might not resonate the way it normally does, but most of Gonzaga’s biggest games are still to come. For perhaps the first time ever, Gonzaga’s résumé will be built going forward. Normally it is set in stone at this point. This year, conference play will matter more than ever.