Alice Cooper knows that in 2017 it's impossible to shock, but he's still here to rock 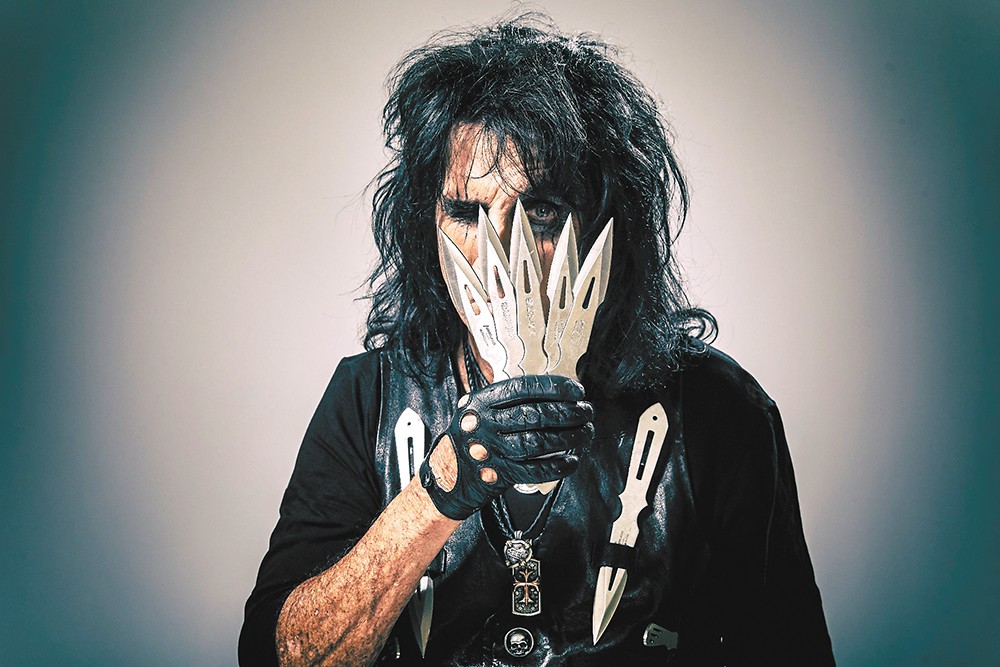 How about a nice Father's Day beheading? Alice Cooper headlines at Northern Quest on Sunday.

When Alice Cooper first started putting out albums in the late '60s,

they had to compete with the still-kicking Beatles, the just-starting Led Zeppelin and the hitting-their-peak Rolling Stones for music fans' attention and dollars. And they still managed to break through, thanks to a hard-edged sound and over-the-top live shows (which often involved simulated beheadings). They landed four straight platinum albums before Alice Cooper the band broke up, leaving Alice Cooper the man (born Vincent Furnier) to forge ahead solo, continuing one of the most successful careers we've seen in popular music.

We talked to Cooper about keeping his show and character fresh, the state of modern rock and more as he traveled toward Spokane for a headlining show Sunday. (Questions and responses have been edited for length.)

INLANDER: You used to cause mayhem with parents and politicians with your stage shows. How do you shock people in 2017?

COOPER: That era is over. I don't think anybody will shock an audience anymore. Lady Gaga did the meat dress thing, and she's great. I told her, "In our day, we would have put you on a spit and barbecued you on stage and had the audience eat the meat off of you!" When you can't be as shocking as CNN, then really, shock is over. Shock is now sort of just part of the show, but the audience is not shocked by the guillotine anymore. But it's still entertaining, and it's still part of the story. So you still have to deal with the guillotine, and everyone is out there anticipating the guillotine, so we still do it and it looks great and everybody applauds. You can't take it out of the show. It would be like not doing "School's Out."

Have young bands approached you over the years for advice on how to stay successful in the music business?

The most important thing is, "How good are your songs?" In our generation, we had to compete with the Beatles and the Rolling Stones and Led Zeppelin, all those bands, so your songs had to be what was really your motive. Everybody in our generation was a great live band. Uriah Heep, everybody. You had to be a great live band. And you had to be a great recording band. And you had to write great songs. Now, it's not necessarily what's good, it's what's next. Which is too bad. I think we're settling for fast food rather than gourmet.

How did we get here, where young rock-and-roll bands barely exist?

It has a lot to do with the record companies. We came up in an age when Warner Bros. didn't want two albums, they wanted 20 albums. They were interested in investing in the career because they believed in the band, and they believed in me. And so I put out 20 albums, and they got 15 platinum albums out of that. Now, my son is in a band called CO-OP, and if they were in the '70s, they would have had five albums out already and they'd be doing really well by now. But they're now in an era when everyone is looking for the next Ed Sheeran, or everybody is looking for Bruno Mars. Nobody is looking for the next great rock band.

We've lost a lot of rock legends the last couple of years. Do you see that and start reflecting on your own mortality?

I did lead a hard life up until 35 years ago. I was a candidate to join the 27 Club, easily. All my big brothers died at 27. Jim Morrison, Jimi Hendrix. All those guys were buddies of mine. They were like my big brothers. I looked at what they were and I thought, "These guys, they are trying to live their image off stage." So the one thing I learned from Jim and Jimi and those guys is, my character is actually more intense than theirs is, so I'm going to have to coexist with him somehow. And when I finally got sober I realized, "You can be Alice on stage, and you give it everything you've got as Alice, and you believe that you're Alice every single night." To this day, when I go on stage I'm Alice. I'm not me. And I love Alice. But as soon as that curtain comes down, I'm not Alice anymore, and I don't have to be him. And that way I can go play golf, go to a movie, I can be myself. Those guys never learned how to turn that off, they just blasted full steam ahead.

I know you had at least one near-death experience on stage. Have you had a lot of prop disasters?

When you're doing a show like ours, which is half-vaudeville and half-nightmare, the more props you use, the more Spinal Tap moments that you're letting yourself in for. There are things when you go, "This is going to work great, this is going to be so good," and in front of the audience, it doesn't work. Then you might do something accidental, and the audience loves it, and I'll go, "Leave that in." You rehearse this stuff, and rehearse it and rehearse it, and it should work. But sometimes it doesn't, and you have to play it as a comedy.

Your audience is full of people who see you over and over again. How do you keep the show fresh for you and for them?

I think there's a certain amount of defiance in the Alice character that I really enjoy playing. I think people might expect, "Now wait a minute now, Alice is almost 70, that means he's going to walk through the show." And then when they see the show, they go, "Holy crap! That's unbelievable, the energy!" And most of it's coming out of me.

When I first saw you, I knew it would be theatrical, but I didn't realize how diverse the songs are.

If we do a nine-hour rehearsal, eight hours is the music. If you don't have the cake, you can't put the icing on it. We bring a lot of icing on the cake. But if you don't have the tunes, it's just a puppet show. To me, I have the best touring band of anybody right now. This band can blow anybody off the stage. And then you put the icing on it, you put all the olives on it, all the attitude and character, and then you have something really unique. Then you have something that the audience, even if they came not liking you, they walk away going, "Wow, that was some show!" ♦

Down North with Left Over Soul @ Lucky You Lounge