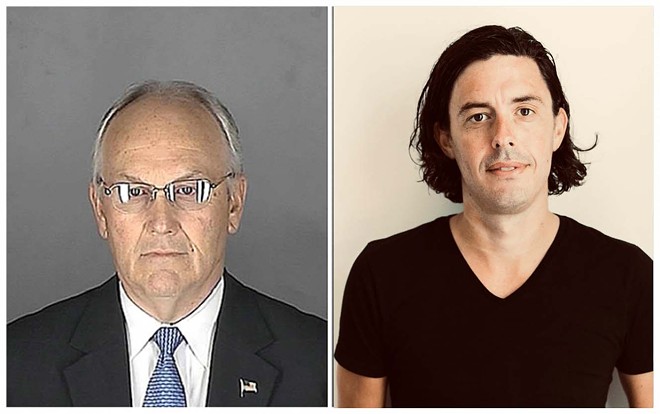 Tuesday, Nov. 3, may be remembered as the day when Never Trumpers got their revenge.

Led by conservatives horrified by the prospect of Donald Trump becoming the face of the Republican Party, Never Trumpers threw everything they had at trying to stop him in 2016.

And even though most of the Never Trumpers reluctantly hopped aboard the Trump Train in the end, you had guys like Tim Miller, Jeb Bush's former communications director, who joined a political action committee with a last-ditch goal of stopping Trump before the nominating convention.

"Tim Miller is going to fight Donald Trump until the last delegate is counted," Miller told Showtime in 2016.

Trump won, of course. And for most of Trump's term, what remained of the Never Trump movement had become something of a laughingstock, mocked by both Republicans and Democrats for being helpless to steer the course of an increasingly Trumpy Republican Party.

Even then, though, Miller kept fighting Trump, first with a stint as the token Republican among Obama-alums on the podcast Pod Save America (it ended poorly) and then as a writer for the Bulwark, filling the anti-Trump conservative opinion website with newsletters, podcast episodes and hot takes.

And yet, maybe the most visible independent PACs in the 2020 election have been Never Trump groups.

Much of the attention has gone to the Lincoln Project, a group of Never Trump strategists blasting out a firehouse stream of bombastic ads using everything from maggot footage to penis-size jokes to condemn and troll Trump and his allies.

But the more effective group might be Republican Voters Against Trump, which aims to persuade those who voted for Trump in 2016 to vote against him in 2020. In all likelihood, these are the voters, not the ones who cheer Lincoln Project insults on Twitter, who will cost Trump the election.

Miller is the political director of Republican Voters Against Trump. Their strategy? Instead of painting the Republican Party as a tyrannical abomination, find regular everyday folks — not slick media stars — and have them share testimonials about why they just can't support voting for Trump this time.

Miller had worked on the presidential campaigns of Jeb, John Huntsman and John McCain. He'd been the Republican National Committee's liaison to the Romney campaign. And now he was trying to convince longtime Republicans like himself to reject a Republican president.


"For a lot of people, it is a big part of their identity," Miller says. "We have a person who made a video for our site that named their daughter, 'Reagan.' Other people who have little Republican paraphernalia in their house."

To publicly cast that aside, to reveal themselves as a Biden voter, was a deep sort of change.

"To say that you're not that anymore, that you can't support it anymore, is a loss," Miller tells the Inlander. "I've had that conversation with a number of them. It's a personal thing. It's a shift that a lot of those folks are going through."

Miller can relate to that sort of struggle on a deep level, not just politically, but personally.

In the fall of 2007, Miller was struggling with how to handle an identity issue of his own.

"I knew I was attracted to men," he tells the Inlander. "I didn't really know what to do about it."

And of all people, it was Idaho Senator Larry Craig — caught in a messy and humiliating bathroom sex scandal — that helped Miller take the risk to come out.

"Right as I was starting to come to terms with this... all of a sudden, there he is on my TV, talking to Matt Lauer, just looking pathetic," Miller says. "I've got to go deal with it. I can't hide from it."


Miller was 25. He remembers walking into a gay bar in Des Moines, freaking out, and walking right out again.

This was 2007, when even Barack Obama was officially opposed to gay marriage. Three years earlier, Republicans like Karl Rove had used the fears over same-sex marriage to turn out a wave of evangelical voters to bolster George W. Bush. Hell, Rove had once spread anti-gay smears about John Weaver — McCain's campaign manager during Miller's stint on the campaign, though Miller wasn't aware of that at the time.


Miller remembers the campaign in Iowa where he asked if anyone actually supported gay marriage and only one other staff member raised his hand.

In the meantime, a gay investigative journalist had been going around attempting to out prominent Republicans like Craig.


Back then, Miller would look at cultural portrayals of gays on shows like Queer Eye for the Straight Guy and recoil.

Miller had had certain experiences (drunk, freshman, in college, etc.) — but he'd also had a girlfriend. They had a decent-enough relationship, setting aside the whole keeping-a-huge-secret-about-his-sexuality-from-her thing. If things had gone differently in a race in Delaware, maybe they would have stayed together.


"I wanted to have kids. I wanted to still have a good relationship with my family. All my friends were, like, straight dudes. I didn't have gay friends," Miller says. "It was hard for me to envision a path to a happy gay life."

But then a few things happened. He left McCain's primary campaign after his team was downsized. He was back in D.C., working in P.R., when he met another conservative gay guy, someone he could quietly talk to about who he was. Miller read a book called The Best Little Boy in the World, a memoir about growing up as a gay overachiever written by the treasurer of the Democratic National Committee.

"I'm going through this process: Can I envision for myself a happy gay life?," Miller recalls. The closet was suffocating but safe. Coming out felt risky.

But then came Larry Craig, bearing a "message from the universe."


For 18 years, Craig served as a U.S. senator representing the state of Idaho, and 10 years before that, represented Idaho in the U.S. House.

But then, on June 11, 2007, Craig took a career-ending bathroom break in the Minneapolis-St. Paul International Airport.

Craig was accused of soliciting sex from an undercover male police officer. Larry Craig had tapped his foot — a signal apparently used to solicit sex, the officer said. Craig had stuck his foot under the stall to touch the officer's foot — he had a "wide stance," Craig later claimed — and then swiped his hand under the stall multiple times.

The scandal appeared to confirm decades of rumors about Craig's sexuality. Yet the senator continued to deny he was gay or even bisexual.

It was like Craig was the Gay Ghost of Closet Future, a grim specter tapping at the tombstone of where Miller could end up if he continued on his path.

"I'm looking at this really sad, old man. I feel bad for him. ... All of a sudden, I started envisioning, 'Wait a minute, I might not be able to have a happy, straight life,'" Miller says. "The life [road] that I always thought I was gonna go down might be the one that is actually the sad one. I'm gonna end up with a family and kids, and I'm gonna want to be a good dad and stay in that relationship. And meanwhile, I'm gonna be like, you know, tapping my foot in an airport bathroom... It gave me the kick in the ass I need."

Miller decided to come out, and his Republican colleagues — almost to a person — welcomed him with open arms. And he had Larry Craig to thank.


"I feel bad for Larry," Miller says. "I wish my story was he saw me at a bar in D.C. and gave me a wise speech from a closeted gay man."

That isn't to suggest everything was always easy. He remembers being in a meeting with a right-wing group when gay marriage was legalized, and some attendees — unaware he was gay — made some anti-gay cracks.

He felt like he had to have the talk — where he had to come out to every boss — in the future.


"I remember John Weaver and Jon Huntsman both, to their credit, telling me that they didn't care," Miller says. "Like, 'we can take the heat.'"


But he suspects it's easier for Democrats who can talk about it without a "weighty undertone of, like, 'There's gonna be a nasty Breitbart article about this.'"


"Trump's made some atrocious policy decisions on these issues. But culturally, being a gay person for Trump, they see it as almost contrarian and interesting," Miller says. "I worry a little bit about having three votes on the Supreme Court to take my marriage away. But that's a long way from five votes."

The entire culture, he says, has changed dramatically in 13 years.

"This is a cultural shift that the Republicans got swept up in," Miller says. "Pretty much any Republican nominee in 2004 would have been anti-gay and anyone in 2016 would have been 'neutral' or whatever you want to call Trump."


Still, it remains a lot tougher to be a gay Republican in rural areas than it does in places like D.C.

In the 13 years since coming out, Miller says he's been "the ear for the closeted Republican gay" numerous times, trying to pay forward those conversations that helped him to come out.

"There's been a little bit of a gay subtext to these videos," Miller says. "A lot of people describe these videos as coming out of the closet. They're 'coming out.'"

Of course, sexual orientation and politics are vastly different things. Politics is a choice.
But our political beliefs can also be embedded deep within who we are and how we see ourselves.

And even if Miller gets his wish and Trump is defeated on Tuesday, it's not like Trumpism disappears.


"He's not going anywhere. He's not going back to Midland to paint like Dubya. He has a massive base of support. I think that the party continues to go down a pretty Trumpy route... I think the general sort of populist nativist strain of white grievance is what will continue. I definitely think that trans-Americans are being targeted here."

So that all leads to another identity question: Miller is the political director of Republican Voters Against Trump, but does he still consider himself a Republican voter against Trump?

Miller paused for a moment at the question.

"Once I vote for Joe Biden, which I plan to do soon, I'll have voted for two Democratic presidential candidates in a row, right?" he said, chuckling. "I don't know that it matters that much what I call myself."