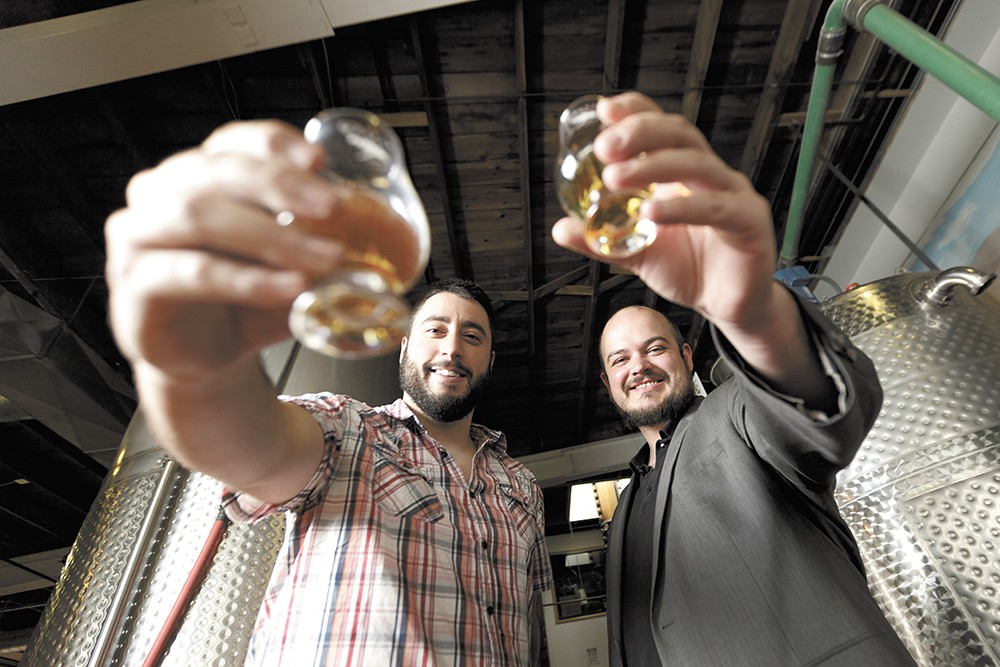 Rockwell Rutter calls himself "more of a spirits guy than a beer guy,"

and a couple of years ago the serial entrepreneur was ready to put his money where his taste buds were leading: straight into Washington's booming craft distillery scene.

The 27-year-old Spokane native — founder of Se7en Marketing and co-owner of board game development company Zoydan Games — had talked to a local restaurateur about distilling in the eatery's basement, and tried to secure funding to help with the considerable costs that come with building a still and getting the production running. The money ultimately fell through, but not before Rutter got a serious education.

"During the course of that venture, I was doing as much learning and as much reading as I could about how to distill," Rutter says at Durkin's Liquor Bar over a bourbon from Seattle's Oola Distillery. "How do I open this thing? How do I run this thing? And I found out, it's really, really hard."

The liquor laws force craft distillers to have a workspace that's up to fire code, all the distilling equipment and all the licenses and permits required before a wannabe can make a drop of booze. Only then, Rutter says, can you "turn the thing on and see if you actually like doing it."

Where many would look at the regulatory hurdles as a reason to bail on the craft scene, Rutter saw an opportunity. He partnered with longtime friend Dan Siegel, also 27, to create an online school, Distilling University, that teaches aspiring distillers all the lessons he learned in trying to open his own.

The duo spent years gathering content before launching the site, DistilleryUniversity.com, in April. While some existing craft distilleries and community colleges offer courses, those workshops can cost thousands of dollars. The goal of their site, Siegel says, is to offer "a good, honest education that's not crazy expensive."

For $49 a month or $499 for a lifetime enrollment, students can access 22 hours (to date) of online workshops and lessons from established craft distillers from throughout the state. Rockwell and Siegel say that's just the start.

They've been able to tap into the friendly network of Washington's craft distillers — the largest in the country — including Oola, Hardware Distillery in Hoodsport, 2 Loons Distillery in Loon Lake and 2bar Spirits in Seattle, for advice and interviews for the site, despite the potential for Distillery University to create a slew of new competitors for the existing businesses.

"What's really great about the craft distilling industry is that everyone is still passionate about growing the industry by any means necessary," Rutter says. "Maybe in 10 or 15 years, it will be a little more cutthroat out there."

Greg Schwartz and his wife Trisha started 2 Loons Distillery after taking a traditional class, but that cost them $2,000 and a week's worth of vacation. Schwartz thinks that an online craft school could be helpful for people just starting out. Rutter and Siegel recently filmed an interview for Distillery U at their Loon Lake business.

"I definitely would have done that first back when we started," Schwartz says. "And then maybe go take a class with more hands-on experience."

An early Facebook ad campaign helped Distillery University enroll about 50 students in its online halls. Siegel, in the process of completing his marketing degree at Eastern Washington University, and Rutter (also an EWU marketing grad) spend about 30 hours each in a given week working with students, gathering new content and maintaining the website. They share an office space and juggle other school and business commitments. Their friendship began when the pair worked together at Sears 10 years ago, and that bond goes a long way in helping fuel their passion for the grunt work of a startup.

They reached 50 students quicker than they anticipated, and are pleasantly surprised by the early reach of the website.

"We're seeing a lot of traffic from places I wouldn't expect," Siegel says." We've been getting a lot of hits from California. A lot from the South, the East Coast. I thought it might be better to target specific areas in the country [with ads], but they're coming from all over."

Both see vast potential for Distilling University as the craft booze field continues growing, and they expect it to follow the seemingly limitless growth of craft brewing. And if all goes well, they envision it growing into something far bigger.

"Over time, what I see happening is the evolution of the Distilling University into the Artisan University, where in addition to teaching people how to do spirits and open a distillery, we teach people how to make beer and open a craft brewery, or their own winery," Rutter says. "Maybe people are into cheesemaking, or chocolate-making. Something that's a passion for people, that they can put themselves into. I want us to be the umbrella for that." ♦