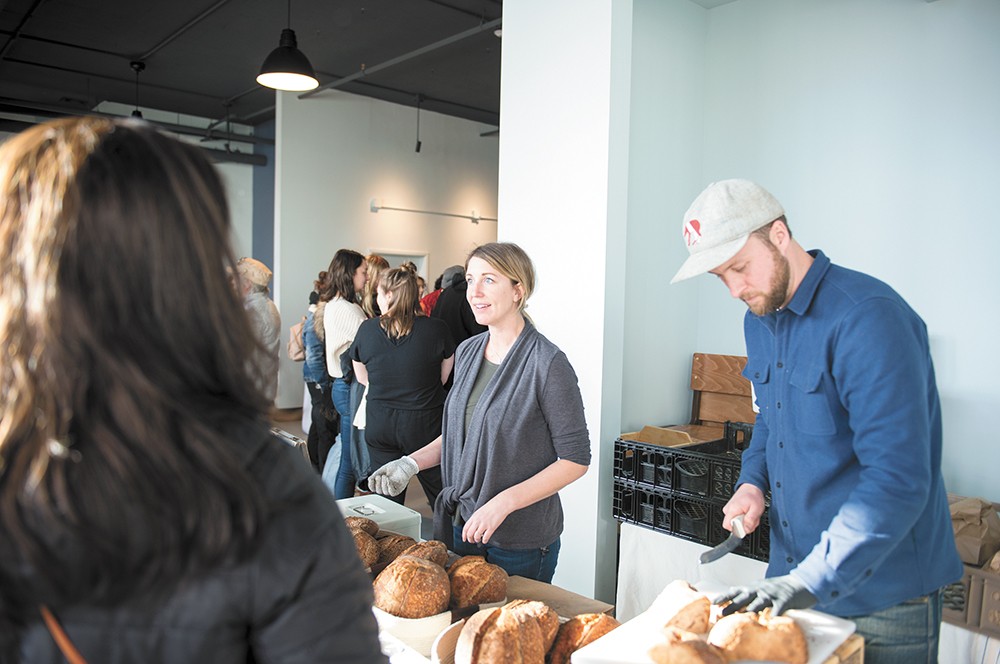 Although Happy Mountain Mushrooms' website refers to itself as a "cultivator" versus "farmer," the local grower faces challenges similar to other regional food growers that rely on farmers markets to sell their goods: What to do in the "off" season?

"People kept asking us where they can get mushrooms when the market closes [in the fall]," says Krysta Froberg, who started the Spokane-based company with partner Tanner McKinlay last spring.

The recent opening of Lumberbeard Brewing Co. (25 E. Third Ave.) in downtown Spokane, where McKinlay is also a brewer, however, presented an opportunity. Noticing a trend among other local breweries hosting community-building and pop-up events like beer yoga, Froberg approached Lumberbeard about starting a market.

The brewery was all in. The first "Winter Markets at Lumberbeard" event was held Feb. 23, with subsequent events scheduled every other Sunday from 2-4 pm through May.

"We created Winter Markets as a way to support other local businesses and provide an opportunity for [residents] of the area to gather and spend time together," says Lumberbeard co-owner Hannah Gordon, who opened the brewery with her husband Bret Gordon.

Those who attend can walk around and shop with a beer in hand and have some food (or bring their own), while vendors can focus on customers.

Froberg called numerous local vendors she met while selling at summer markets to sign on to the modest 10-booth market, many of them ambitious and creative 20- and 30-somethings like herself, including Lucid Roots and MaK Bread, both from Idaho. Spokane-based Well Grown Farms' microgreens, Spangle's Browning Beef and a few rotating artisan vendors have also signed on for the biweekly market slated to end when other spring/summer markets kick off for the year.

That's when Froberg hopes to participate in another Spokane market startup. The newly restored Wonder Building recently put out an application call for its new Wonder Saturday Market (wondersaturdaymarket.com). The plan, says organizer Kim Deater, is to host the indoor market every Saturday from 12-4 pm, from May through October.

In North Idaho, two farmers markets have been ongoing through the winter, with another launching recently.

In Plummer, the One Sky/One Earth Coalition has hosted several monthly markets at the Marimn Wellness Center (1100 A St.) since last fall. The final event of the season is March 4, from 4-6 pm, and includes vendors of home decor, toys, canned goods, baked items and more, says market organizer and University of Idaho Extension Educator Shaina Nomee.

In the summer, Moscow's regular farmers market is a sight to behold, covering several city blocks. After it closes in October the Heart of the Arts market kicks in, running on Saturdays, from 10 am-2 pm, from November through March at the city's 1912 Center (412 E. Third St.). Currently celebrating its fifth season, the market features produce from regional vendors, including Royal City, Washington-based Tonnemaker Hill orchard and farm, Gourmet Foragables of Spokane, and Brush Creek Creamery of Deary, Idaho.

Further north in Sagle, the Only Local Farmers Market (464138 Highway 95; facebook.com/onlylocalcocolalla) took over a handsome, two-story barn last year to start an ambitious year-round market with the vibe of a country store. Open daily, Only Local offers a variety of goods from more than 70 regional vendors, according to owner Thomas Fletcher.

The market carries a small cadre of crafters — soaps, jewelry, textiles — and a larger cache of nonperishables, like lard and stone-ground flour from Bonners Ferry-based Farm to Market Grains, as well as hearty, cold-weather crops from vendors like Homestead Produce, also in Bonners Ferry. In the cold case, look for conventional items like eggs, cheese and grass-fed beef from Cocolalla's Heritage Farms, but also surprises like ground yak and the always-welcome splash of green by way of McKerracher Family Farms' microgreens, herbs and other leafy goodies.

Situated on a well-traveled portion of Highway 95 with distinct signage bearing a green tractor, Only Local isn't hard to spot, providing those whizzing by know to be on the lookout for this unexpected venture looking to promote the panhandle's bounty.

When it comes to an increase in farmers markets across the Inland Northwest, Spokane mushroom grower Froberg sees both sides of the dilemma: If there were more markets, there are definitely enough farmers who'd be able to support them, and if there were more farmers there might be more markets. That's what makes the new collaboration with Lumberbeard a win-win, she says.

The same might be said for all the markets working to extend the selling season beyond summer. ♦

The original print version of this article was headlined "Beyond Summer"