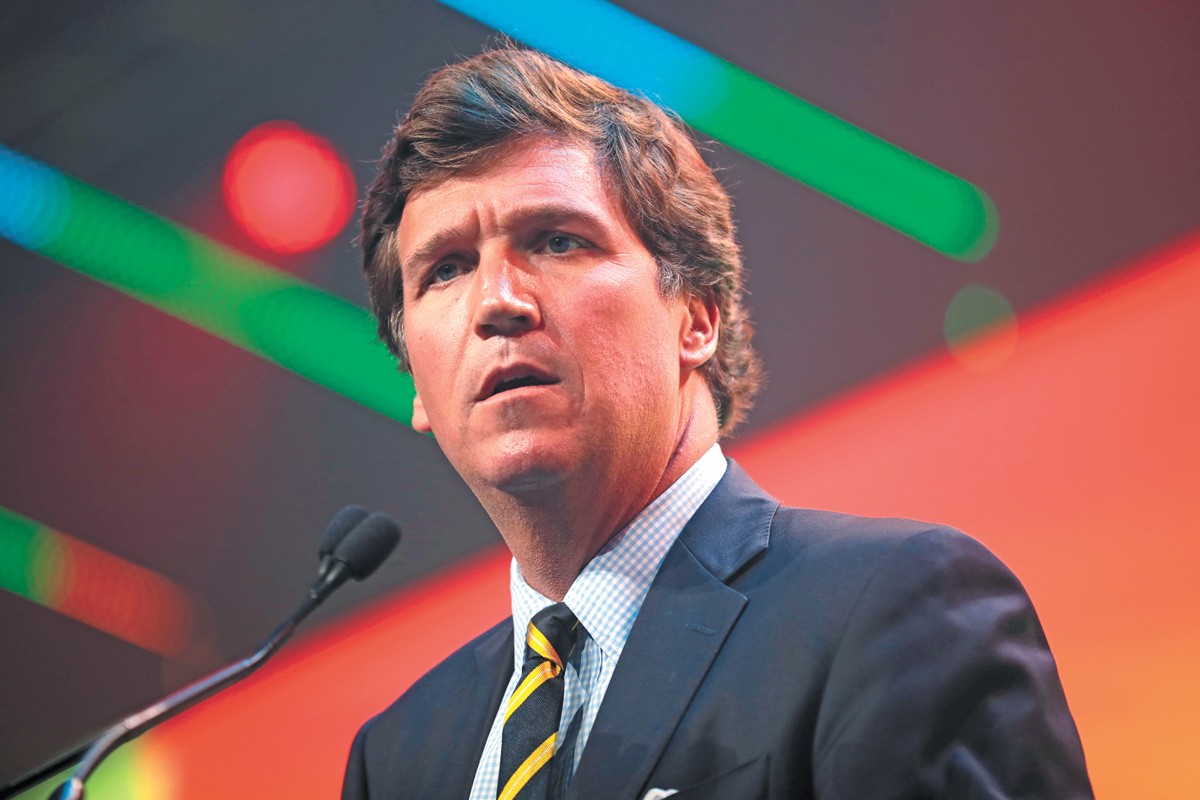 What can be done about Tucker Carlson? Carlson is the Fox News pundit who traffics in the most extreme conspiracy theories, factual falsities and outrageous declarations.

He has attacked Black Lives Matter, has denied the existence of systemic racism in the U.S., and has led efforts to ban instruction in or even discussion of critical race theory.

He has given cover to White supremacists, arguing that White nationalism is a good thing, not equivalent to White supremacy. In the process he has blamed immigration for everything from homelessness to COVID-19.

Meanwhile, he has downplayed the pandemic, viciously attacked Dr. Anthony Fauci and even gone so far as to declare that parents who put masks on their children should be arrested for child abuse.

Of course, it is Carlson's strident, relentless, unsupportable rejection of the 2020 election that has most energized his millions of viewers and helped make him the most-watched cable "news" personality.

Carlson joined Fox News in 2009. In the beginning he was second chair to the original Fox nutjob, Glenn Beck. In the first years of the Trump administration, he was second banana to Sean Hannity.

But Fox fired Beck in 2011. And Hannity lost considerable exposure — and clout — when Trump was booted from office. With Rush Limbaugh's radio voice silenced, the role of lead right-wing fire bomber has fallen to Carlson.

Fox News operates in its own media universe. The ethical principles that operate in the rest of the broadcast and cable news industry simply do not apply. To his credit, minimally, Carlson does not present himself as a journalist. He is a commentator who has, on occasion, referred to himself as an entertainer. You might recall he even competed on Dancing with the Stars a few years ago. Before his Fox News popularity soared, he could be heard on various shock-jock radio casts that specialized in racism and misogyny.

Still, his millions of viewers believe what he says. The Carlson agenda, particularly the stolen election claim, drives Republican opinion, as poll after poll shows.

So how do we deal with a major cable personality who traffics in the most outrageous and dangerous falsehoods?

Beck was fired in 2011 because of way too many outrageous statements that led to an advertiser boycott. As ideological as its managers might be, the Fox News leadership is equally concerned with profits. Beck had become a financial liability.

But the circumstances that led to Beck's firing no longer exist. In 2011, his ideological demon-seed, Barack Obama, still had five years left in the White House. The hyperpartisan environment in which we currently live was less entrenched. Fox could fire Beck, staunch the financial drain and hire new flamethrowers.

The ideological divide now is far more substantial. Since Trump's election in 2016, the misinformation machine has clouded the judgment of tens of millions of Americans who seem immune to any reasonable fact checks.

Calls for a financial boycott of Carlson's show have caused some advertisers to bail. But in the world of nut-case punditry, other advertisers are willing to climb on board, especially as Carlson's ratings skyrocket.

Further, Fox could not withstand the right-wing backlash that would follow a Carlson firing. Struggling to rebuild a post-Trump identity, the network desperately needs him.

So, what do we do about Tucker Carlson?

A telling New York Times report from last week noted that Carlson is a ubiquitous source for D.C. reporters looking for background information on the very people Carlson supports publicly, including Trump. The cozy Carlson-press corps relationship provides some protection from news media scrutiny and is not likely to end while Carlson can shovel dirt behind closed doors.

Which leads us to this: Social media platforms have silenced the lead conspiracy/misinformation monger, Donald Trump. He lost his Twitter voice months ago and Facebook will not allow him back on that platform until after the 2022 midterm elections, if then. His efforts to launch a blog failed, drawing a barely measurable audience.

But social media platforms have not moved as aggressively against Carlson or Fox News or many of the other lunatic fringe voices and sites threatening our future. It is unlikely the big two — Facebook and Twitter — will move to ban Carlson. That would inevitably result in calls to ban progressive voices, such as Rachel Maddow.

Perhaps the best strategy at the moment is an aggressive push to force those platforms to more assertively fact-check Carlson and his ilk, and to delete the most outrageous posts such as those promoting the election lie.

What do we do about Tucker Carlson? Right now, our best hope lies in pressuring social media platforms to take a stronger stand for truth and civility.

How twisted is that? ♦

Steven A. Smith is a former editor of the Spokesman-Review. Before joining the S-R, Smith was editor for two years at the Statesman Journal, a Gannett newspaper in Salem, Oregon, and was for five years editor and vice president of the Gazette, a Freedom Communications newspaper in Colorado Springs, Colorado. Smith is now clinical associate professor emeritus in the School of Journalism and Mass Media at the University of Idaho, having retired from full-time teaching at the end of May 2020. Reach him at newsman46@yahoo.com.