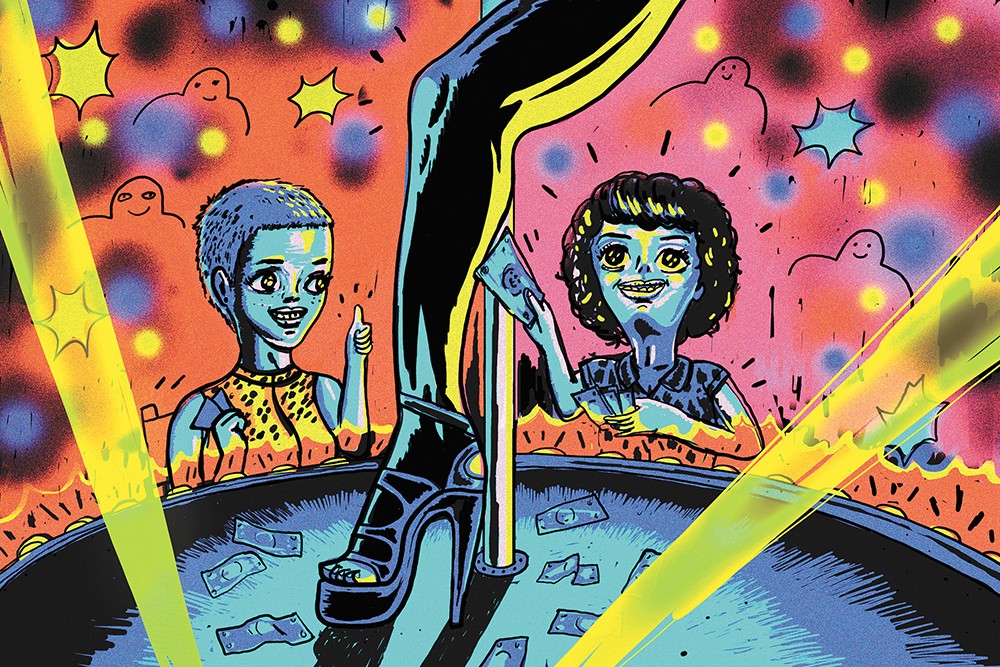 Caleb Walsh illustration
Strip clubs are better with a sense of humor.

It's a warm spring afternoon, but I'm holed up in a dark strip bar in Portland. To my left, a red-headed dancer slinks down a brass pole to a mid-tempo OutKast song as she slowly unties the strings of her black velvet bodysuit. On the bar TV there's another dance happening: the Big Dance. Gonzaga's men's basketball team has made it to the Elite Eight against Texas Tech. I'm in town for a writing conference and feel more comfortable catching the big game at this casual strip joint than a sports bar.

I'm only interested in Zags basketball because my grandparents are huge fans. As a woman who's attracted to multiple genders, I'm also interested in boobs. So this place hits the spot. As it becomes clear the Zags will lose, I sigh and shake my head between sad sips from a CBD lemonade. A bro-looking guy (rooting for Tech) sees my deflated hopes and says, "Hey, I'm sorry your team lost. Would you like a hug?" I actually do. He seems sincere and caring, so we hug. Anything can happen at a strip bar.

By now a tattooed blonde is wiping the pole down with a rag and spray bottle before her routine begins. As I watch her remove her metallic bikini (yet keep her sneakers on!) and use isolated muscle clenches to make her butt cheeks bounce individually, I think: 1. Strippers are so talented, and 2. I wish Spokane had a bar like this.

When it comes to topless coffee stands, Spokane has many. We have the occasional burlesque show, too. But I don't drink coffee, and I don't want pasties or Vaudeville shtick. I want a butt-shaking, nipples-out strip club, with dark mirrors and a strict no-photography policy — within city limits. Sure, there's Deja Vu Showgirls — a national chain — in Spokane Valley. Post Falls has State Line Showgirls. Yet both strike me as too slick, serious, and geared toward men's tastes. Deja Vu calls itself a "Gentlemen's Club" (a term I find unwelcoming to women) and their slogan of "1000's of Beautiful Girls & 3 Ugly Ones" is just ugh. Since neither club serves liquor where dancing occurs, they charge a steep door cover to keep the lights on and the clothes off. I get that. However, I'd rather slide my dollars directly into a dancer's G-string.

Weekly drag shows at nYne and go-go dancer nights at the Blind Buck are decent consolations; the mood is playful and joyful at both. Audience members usually respond with shouts and tips. (Note: If you're in the front row gawking at a drag performer or go-go dancer, be prepared to offer up bills — or else fall back. It's basic etiquette.) If only dancers could bare all though!

I prefer strip clubs with a sense of humor. Seattle's now-shuttered Lusty Lady was famous for its outdoor marquee loaded with sexy puns and entendres (the Devil Wears Nada, Happy Nude Year). In Seattle — behind the walls of a secret banquet room in a karaoke bar — was where I saw my first private strip show, for a friend's bachelorette party. We chipped in and hired a tan, smooth-chested male stripper. Did he bring his own boombox? You bet he did. He danced and showered the bride-to-be with special attention. It was fun and laid-back. By evening's end, a mutual friend offered me a job working with teens at a private school. Conducting professional business a few feet away from a stripper felt like a scene from a mafia movie.

Though this sounds zany, I don't necessarily consider stripping to be sexual. Sensual, sure. Perhaps erotic. But all good dance moves — even fully clothed — originate from the pelvis. Not to get too Footloose, but there is a spiritual aspect to dancing. Add the vulnerability of nudity, and you get a tender, divine rite. It is a privilege to witness a stripper close their eyes, get lost in a bass line, and enjoy themselves on stage (or at least appear to) without shame. It's mesmerizing. When I met up with a fellow bisexual friend at a Portland strip club, we weren't drooling lustfully at every dancer, thinking, "I want to be with her!" We were like, "How is she doing the splits while upside down? Impressive!" And yeah, we were admiring her physical form, too. Even if you're not attracted to naked women, it's sure lovely to watch a woman move with purpose, draw her own boundaries, and receive cash.

Speaking of cash, last week the based-on-true-events stripper heist movie Hustlers hit theaters. I caught a matinee and immediately tweeted: "Hustlers deserves multiple Oscars and your $$." It really is that good. Expertly edited and shot in low light that mimics the interior of a strip club, Hustlers is a fast-paced, character-centered Recession tale, told from the champagne room. It's a trippy flashback to hear Sean Kingston's "Beautiful Girls" and see 2008 fashion trends and Escalades. While not everyone will approve of the strippers' iffy fundraising methods, they'll certainly feel compassion for their choices. Like 1997's porn odyssey Boogie Nights, Hustlers humanizes an often-mocked profession and reveals the power of chosen family.

As I was strolling toward the theater, a classy elder woman rolled down her car window and shouted, "Hey! That's a lovely cardigan you're wearing." I thanked her, and the wholesome exchange reminded me why I like being a woman at a strip club: I feel acknowledged and appreciated. One time a dancer chatted with me in the ladies room and called me "beautiful." I blushed and glowed, fully aware I had conjured the attention with my generous tips. Getting catcalled or sexually harassed doesn't feel good. But a respectful exchange of cash for connection feels great. Much like an unexpected compliment or sweet hug from a stranger, watching a stripper blend muscular strength and snakelike grace can relieve the sting of big losses and make life's pain more bearable. ♦

The original print version of this article was headlined "Pole Watcher"