Riz Ahmed in Sound of Metal

In the final moments of 2020, it's time to bid adieu to a year full of shocking twists. Theaters around the world have closed, reopened and then closed again. Hollywood has either postponed its biggest titles or relegated them to streaming platforms in unprecedented marketing maneuvers.

But good movies were somehow still abundant in this otherwise cursed year — you just had to hunt a little harder for them. Looking at the 10 titles I plucked from my master list, I see a lot of smaller, less mainstream movies that messed around with form, obliterated convention and took wild swings with their tones and styles.

Here are my favorites of the year.

True to its title, this Icelandic film is chilly and shrouded in fog, plunging us into the mental deterioration of an off-duty cop when he discovers his late wife was unfaithful. Part wounded revenge thriller, part meditation on masculinity and grief, its moments of pummeling violence are interspersed with unnerving stillness, and it's all driven by a commanding, sinewy performance from Ingvar Sigurdsson. For rent on Amazon Prime.

Unlike any other movie I've seen, the latest experiment from Bob and Turner Ross appears to be a verite documentary about barflies eulogizing a shuttering Vegas watering hole. But the bar is actually a set and the patrons are actors (the booze, however, was real), and though that setup seems misleading, there's a lot of emotional truth in the overheard flirtations, confrontations and heart-to-hearts between its lost souls. For rent on Amazon Prime, YouTube and Google Play.

Kelly Reichardt tends to take grand historical canvases and zoom in on a single brush stroke, and in this case it's two men — an itinerant baker and a Chinese convict — who attempt to settle in the Oregon territory of the mid-1800s and are eventually undone by a capitalist monopoly. It's told with the gentleness and restraint of a fable, all while puncturing the mythos of the American Western in heartbreaking ways. Streaming on Showtime.

It sounds like the stuff of after-school specials — a teenager from small-town Pennsylvania travels to the big city to get an abortion — but Eliza Hittman's terrific human drama is about so much more than hot-button issues. It's about friendship, income inequality and the imminent threat of predatory men, and it showcases a stunning performance from newcomer Sidney Flanigan, particularly in the quietly devastating scene that lends the film its name. Streaming on HBO Max.

Spike Lee has never been a disciplined filmmaker, a trait that has produced as many masterpieces as messes. In the case of this Vietnam epic about aging Black vets returning to the jungles that took so much from them, his unruliness is in keeping with the turbulent history of our country. It's a sweeping, satirical American patchwork about institutional racism, political division, false memory, PTSD and the glorification of violence, and at the heart of it is old pro Delroy Lindo giving the performance of the year. Streaming on Netflix.

I'm sure Charlie Kaufman's latest brain teaser will be on just as many worst-of lists, which is probably how it should be. And how to even describe it? It's droll, creepy, unsettling, maddening and very, very sad, and it continues Kaufman's ongoing fascination with decay and death, with dispossessed and romantically spurned men, and with the notion of being so consumed by art — film, literature, theater, dance — that it becomes indistinguishable from your own memories. Streaming on Netflix.

Riz Ahmed stars as a noise-rock drummer who loses his hearing, and then finds benevolence in a sober living facility where he learns to live as a deaf person. With its engrossing sound design, the film captures the frustration, panic and confusion that would no doubt come from the world abruptly going silent. But what surprised me most about director Darius Marder's narrative debut is how empathetic and life affirming it ultimately is, how many rich supporting characters it contains, and how many cliches it dodges in its depiction of a person accepting their disability. Streaming on Amazon Prime.

A testament to the healing salve that is live music, this concert film of David Byrne's recent Broadway residency is a perpetual motion machine of joy, and it's a shame most of us will never see it on the big screen. Byrne and his band — barefoot, dressed in matching suits, carrying their instruments with them — cover every inch of the stage, performing a conceptual set full of lesser-known songs and well-worn classics. This the second film on my list directed by Spike Lee, and his treatment of the Janelle Monae cover "Hell You Talmbout" is the most breathtaking individual sequence of 2020. Streaming on HBO Max. 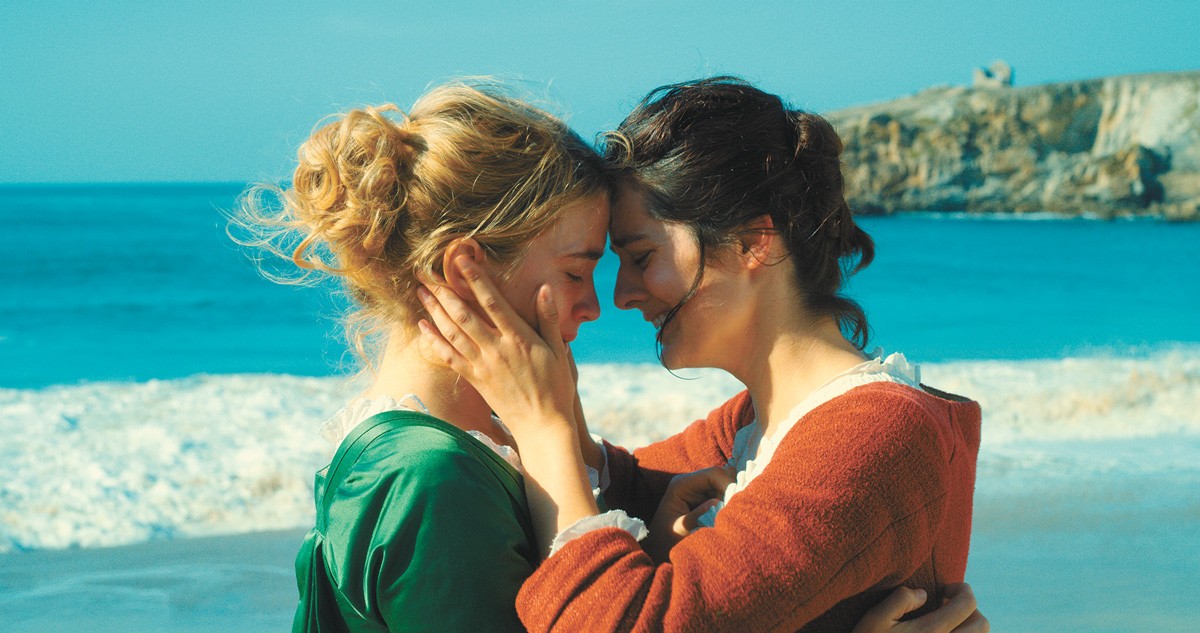 2 PORTRAIT OF A LADY ON FIRE

Though technically a 2019 release, Céline Sciamma's seaside romance didn't open in most parts of the U.S. until the first few months of 2020, so I'm including it here. (Besides, linear time barely exists anymore.) It's one of the most ravishing films of recent years, about the clandestine love affair between two women — a nobleman's fiancee and the artist commissioned to covertly paint her portrait — who are isolated both by society's strictures and the windswept landscape that dwarfs them. Sciamma is one of contemporary cinema's foremost purveyors of the female gaze, and here she applies it to a story of the emotional context that goes into a work of art. Streaming on Hulu.

2020 had one of the strongest rosters of nonfiction films in recent memory, many of which cheekily blurred the line between reality and fantasy. The best of the lot: Dick Johnson Is Dead, a tender, funny, surreal and ultimately remarkable work in which director Kirsten Johnson points her camera at her own father, a retired psychologist, as he succumbs to dementia. By documenting him, Johnson wonders if she can somehow cheat his inevitable death, and she extends the metaphor in a series of increasingly outlandish fantasy scenes in which Dick is gruesomely killed and finds himself in heaven. Johnson captures at least a dozen moments — some comic, some poetic — that I won't soon forget, including a staged funeral that had me crying and laughing simultaneously. This is not only a fascinating consideration of the ethical boundaries we might overstep in preserving a legacy, it's one of the best movies I've ever seen about the weird and oftentimes contradictory ways we confront our own mortalities. And if you don't fall in love with Dick Johnson himself, I don't know what's the matter with you. Streaming on Netflix. ♦

THE NEXT 11
The also-rans, all of which are now available to stream:

The original print version of this article was headlined "Cinematic Superlatives"

Speaking of YEAR IN REVIEW

This year was devastating for the arts and culture community, but there was brilliance among the wreckage