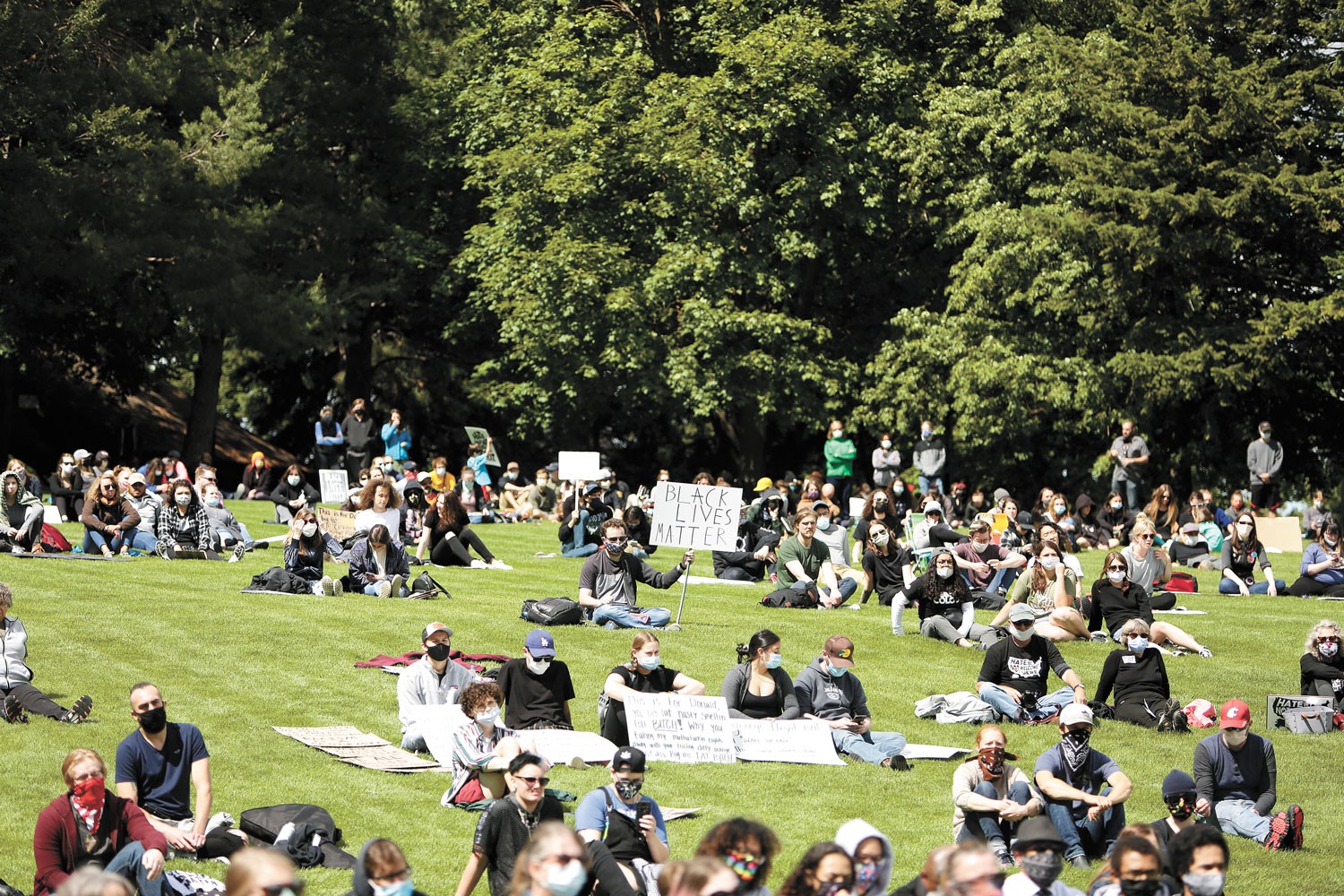 My husband and I were discussing plans for the week — not much to deliberate, lately we are working from home, working on our home or hanging out at home. But that Sunday I wanted us to take our kids to a Black Lives Matter protest — that Sunday especially because their auntie Inga was speaking. He had a landscaping project underway, he countered. But upon returning from a run, he looked at me and said: "I do realize that this is the moment you've been working toward for the past 20 years. I tend to think day-to-day, but big picture, of course we need to take the children to the protest and especially they need to hear Inga."

These are dark days: 45, the pandemic, Putin's unchecked machinations on global domination, and continued violence against Black and Brown bodies. But since BLM protests have gone national and global and since wider audiences are embracing discussions about, and often commitments to, real systemic change, I'm feeling more hope, even excitement.

Protests do not erupt out of a nonviolent "normal." The norm has been violence and those whose lifestyles fit into American norms occupy lives built upon a multi-layered continuity of historical and present disparity and violence. This multiform violence is waged against and visited upon the bodies and lives of those on the "other" side of the normal/other binary constructed by American dominant culture, as well as against the earth — also constructed by American frontiers-people and the U.S. government as an other to be penetrated, subjugated, exploited.

But we are not made to compete and exploit — these are learned behaviors. U.S.-led global capitalism — and the 1 percent reaping its fiscal benefits most — want us to tie our visions of happiness and empowerment with purchases and purchasing power. But happiness studies — and surely life itself — have long been exposing the lie in these linkages. The ultra-wealthy are more likely to be miserable than those whose basic needs are just met. Happiness is understood to be yoked to something, however, and that something is a sense of purpose.

Because human beings are one entity, our purpose is singular. When we use the resources to which we have access to work toward freedom — freedom from oppression, exploitation and other forms of violence — we begin to also understand, perhaps even experience, what it means to be free and to be deeply happy, too. There are countless ways to do this work. Implicit in the work is the understanding that we are ultimately and intimately connected. Your degradation degrades me and mine degrades you. There is copious evidence of this, and there are people whose lives and work serve as a testament to it: Angela Davis, Nelson Mandela, Muhammad Ali, Toni Morrison and so many others. When you're doing work toward truth and reconciliation, social justice and reparation, its intrinsic rewards outshine and outlast all extrinsic treasures.

I teach diverse literatures through explicitly anti-racist pedagogy at a predominantly White institution. In the last month, my work inbox has been full of beautiful expressions of gratitude and commitment from former and current students. They are happy because they know where they stand in response to this unprecedented historical moment. Many of them attribute their senses of purpose and belonging in the Black Lives Matter movement and the current moment to their critical engagement with the works of racialized writers in college. They see around them the fear and misunderstanding in those individuals and communities who have, perhaps until now, managed to keep their own implication in the historical and contemporary realities of race and racism, disparity and exploitation, at bay. These young people, instead, feel ownership in and hope for the possible future carved out by the movement.

My husband, kids and I did get to listen to my sister-friend Inga's passionate, eloquent speech that Sunday. My hope, for all of us, is that we embrace this moment as both a beginning and a return. The unsettling of many of our lives could make possible a recovery of our better selves through reconnecting with our potentially beautiful interdependence. This unprecedented historical moment could be the start of a better era whose reward for imagining beyond current parameters, striving against disparity, and fighting for justice is a resilient and collective joy. ♦

Jessica Maucione, Ph.D., is a professor of English and Powers Chair of the Humanities at Gonzaga University. Her teaching and scholarship explore race, place and displacement along with gender, sexuality and class in literature and film of the Americas.