As Spokane voters wait for a stronger police ombudsman, one councilman takes matters into his own hands 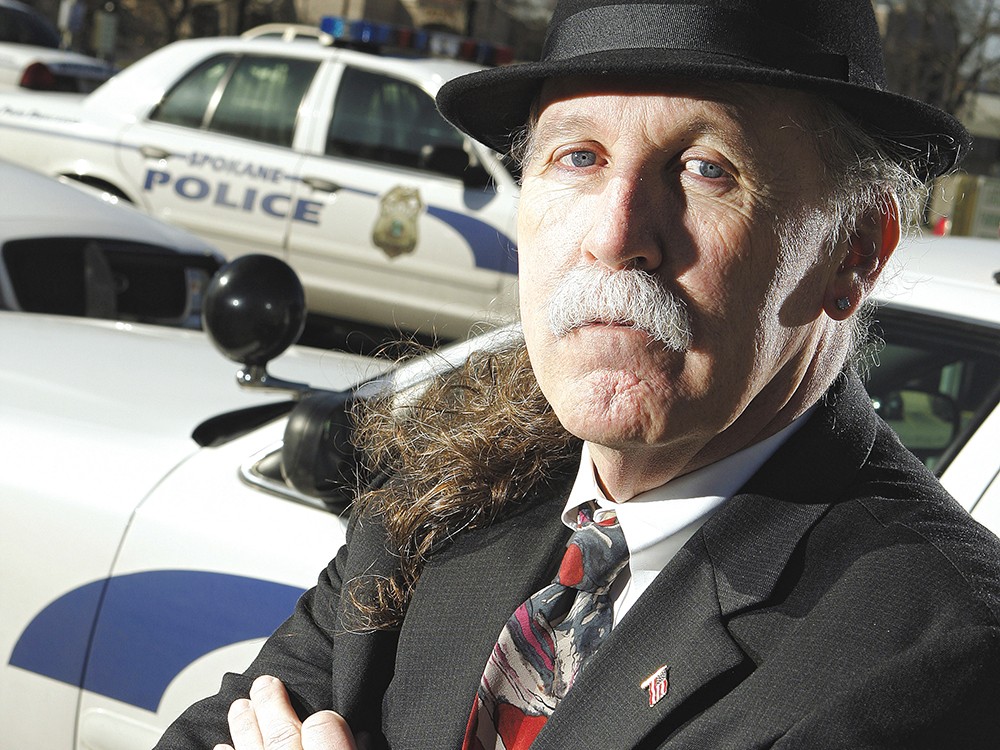 From behind the wheel of a rental car on the edge of Chicago, Spokane City Councilman Steve Salvatori sounds tired. He’s on vacation, but his mind is at City Hall.

“I’m worn out. I’m ready to go,” Salvatori says in his signature no-nonsense tone. “The bananas are turning brown.”

Salvatori says he’s “out of excuses” for citizens who ask why Proposition 1, a measure passed overwhelmingly in February to give the Office of Police Ombudsman expanded powers, hasn’t yet resulted in actual changes. The city says such changes — among them, independent investigative powers and a commission to choose future ombudsmen — will be included in a new contract with the Spokane Police Guild, but the two sides haven’t reached one in 20 months of negotiations. As it stands, the ombudsman can sit in on the department’s Internal Affairs investigations, but can’t launch his own. The proposition outlined expanded powers and mandated that future police contracts allow for them.

Now Salvatori plans to bring forward an ordinance implementing the powers outlined in Proposition 1, despite arguments that such changes have to happen through negotiations. (He’ll present it to a council committee Monday and for a vote by the end of the month.)

Politically, it seems an easy move: Proposition 1 passed with 70 percent of the vote in a city where the public, the police chief and the mayor say they favor more oversight. But a similar move a few years ago ended in an unfair labor practices complaint and a state decision that sided with the guild. For Salvatori, the risk is worth it.

“The lack of a contract is no longer an excuse. … I’m sorry you can’t come to a contract in three years. That’s not my fault; that’s not the citizens’ fault,” he says. “I’m not trying to go out of my way to look for trouble, but I feel we work for the citizens, not for the guild or the administration.”

The frustration isn’t new from a council that finds itself up against a process that leaves it out, but produces a contract it’s asked to approve and budget for. That frustration has only been amplified as citizens have asked about progress in guild negotiations and council members find themselves with few answers. In a letter this May, Council President Ben Stuckart and Councilman Mike Allen asked Mayor David Condon to allow “one or two council members” to attend further negotiations to observe the process. The mayor declined.

In July, the Center for Justice, Spokane Peace and Justice Action League and prominent local civil rights attorney Breean Beggs met with the administration and its legal team, but left with little resolution. Local activists have clashed with the city’s lawyers over whether the city has the power to enforce everything outlined in Proposition 1 and whether ombudsman questions should be matters of negotiations at all. (There was also little clarity about what was public and secret during the meeting, Center for Justice communications director Tim Connor says, putting the center and others in an awkward spot as they try to push for reform publicly.) The groups are worried that if negotiations don’t succeed now and move to an arbitrator, his or her decision — one that may sacrifice more power for the ombudsman in order to reach an agreement — could overrule the city’s desires.

“There are real trust issues involved there,” Connor says. “It’s not personal; it’s just us saying, ‘Look, we’ve watched you drop the ball over and over again on this issue.’”

To understand the impatience and mistrust, activists say, just look back in time. Look back to a Zip Trip under a black night sky in March of 2006, where officers beat a mentally ill janitor who had stopped to buy a soda and was mistaken for a thief. Otto Zehm died two days later, but his fate and the police debacle that followed still haunt the city more than seven years later.

Look back to the bargaining table in 2009, when activists were pushing for an independent ombudsman in light of cases like Zehm’s. That year, the administration approved a contract that did not expand the powers of the ombudsman, even though the council had requested such action.

“I would have never voted for that contract in a million years,” says now-Councilman Allen, who along with Councilwoman Nancy McLaughlin backs Salvatori’s ordinance. “It makes me cranky just thinking about it.”

The next year, the council passed an ordinance giving the ombudsman more authority, an action met with a complaint from the guild that the new law changed working conditions for officers and therefore should have been negotiated as part of the guild contract. In a hearing where the city provided no opening statement and called no witnesses, a state arbitrator sided with the guild and the ombudsman was again weakened.

Finally, look back to the end of 2011, when that contract expired and the guild and city entered into new negotiations. And to the day Salvatori says he’s tired of waiting, the 613th day without a new agreement — days that, because no new deal has been reached, have been governed by the old contract, one without a strong ombudsman.

“The city and the police department are bleeding credibility the longer there’s this big gulf between what voters approved in the proposition and what’s actually happening,” Connor says.

Because of that history, the council has been unified in supporting a stronger ombudsman, but could split on this vote. Salvatori’s ordinance specifies that if any part of it conflicts with an existing contract, that part will be unenforceable until that contract has been replaced with a new one. But the city’s loss to the guild is fresh.

“We lost that ... previously. There’s no reason to think we wouldn’t lose again. It might just end up slowing the process down further,” Snyder says. “It should be very clear to the mayor what the council wants.”

Condon says he’s “as antsy as anyone,” but “Proposition 1 gives real clear guidance on what we should be negotiating, so then let the negotiation happen.”

The arguments over how to best implement police oversight in Spokane are steeped in frustration over the secrecy surrounding negotiations. The city and guild signed “ground rules” last February, agreeing that the mediator involved in negotiations is now in charge of releasing any public information. This week, representatives from the Center for Justice, the Peace and Justice Action League of Spokane and the Spokane League of Women Voters sent the mediator a letter asking for just that.

“The total blackout on information is a drain on public trust at a time the SPD is making good faith efforts to restore trust,” they wrote. “Any information, especially about the fate of the Proposition 1 city charter reforms, is better than the current drought of information — that only fuels frustration and suspicion.”

City and guild representatives refused to tell the Inlander whether they have discussed allowing the mediator to release even limited information to the public.

The Use of Force Commission has blamed the secrecy for hurting public trust of low level officers, and Ombudsman Tim Burns agrees it’s having an effect.

Burns says he’s also in the dark about how the negotiations are going and whether his office is a sticking point. (Connor and some council members say they’re told police pay, not the ombudsman, is holding up an agreement.) And while he’s careful not to explicitly support or oppose Salvatori’s effort, Burns says the community is wondering why, despite their vote in February, they still file complaints to an ombudsman with little real power to investigate them.

“At some point we do need to go forward because clearly this is the community’s desire,” Burns says. “If that has to be without everyone’s buy-in, well, that’s unfortunate, but it may be the necessary reality.”

While Spokane Police Department officials have publicly embraced many reforms recommended by the city’s Use of Force Commission, confidentiality rules surrounding ongoing negotiations between the city and the Spokane Police Guild have left recent efforts on some key reforms delayed or shrouded in secrecy.

Commission Chairman Earl “Marty” Martin says one key recommendation calls for the department to open up the negotiation process by having both parties outline what issues they want at the bargaining table. Martin says the public should know “who is staking out what ground.

“It’s important for the public to understand who is asking for what or requiring what,” he says of the negotiations.

In talks since 2011, neither the city nor the police guild has released information about what issues they have included in negotiations, but some high-profile reforms such as new body cameras and expanded civilian oversight have been pulled into the confidential discussions.

Even the Use of Force Commission and the City Council have been cut out of those closed-door conversations on where those reforms are at and how they might be implemented. Martin argues the public should be able to voice feedback on bargaining priorities and should be aware of what sticking points may be delaying the implementation of new policies.

“It’s very important for the public to understand what’s holding that up,” he says. “We do hope that in the future they’ll maintain a position that’s more open.”

Despite the confidentiality agreement, Martin says the city and police guild could still put out a joint statement on the goals and priorities of the negotiations to help open up the process.