By letting it all hang out at the end of their biggest creative burst, the Rolling Stones left their mark on music. 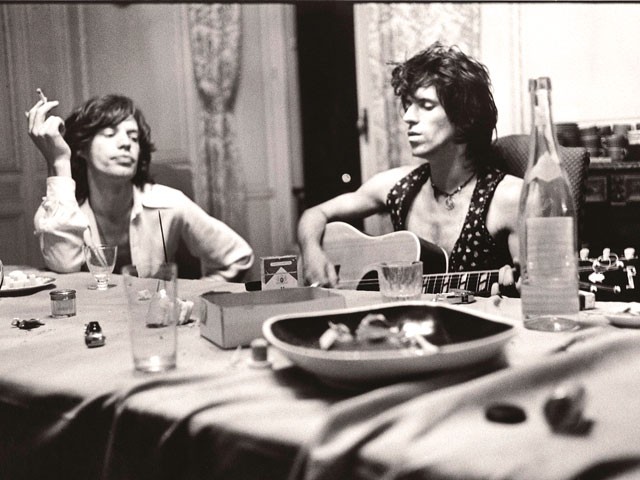 May 1972 didn’t seem like the time for a rock ’n’ roll revival. The hangover from the 1960s was in full bloom, and Nixon’s silent majority was about to put the smackdown on McGovern. (The Watergate break-in was coming up in June.) The big hit on American radio was “First Time Ever I Saw Your Face.” Apparently it was time to mellow out.

The Rolling Stones didn’t get the memo, and on May 12 they dropped Exile on Main Street. Now, 38 years later to the week, Universal has re-released a fresh Exile with some bonus tracks taken from those sessions.

It’s odd that all these years later Exile is the Stones album we’re still talking about. It could have been a total disaster, as the various Stones dropped in and out of recording sessions along with hangers-on and dope dealers. Mick Jagger thought the master tapes were a wreck.

Today Exile is listed at No. 7 on Rolling Stone magazine’s list of the 500 greatest albums of all time.

The Stones were one of the bands that got “discovered” by talent scouts in the early 1960s. Trying to please their hit-making masters and follow the Beatles’ lead to stardom, they cast about for an identity. They never really did fit in with the psychedelic scene, but in 1967 they put out Their Satanic Majesties Request, a kind of Sgt. Pepper’s rip-off. It sold well, but the band hated it. It just wasn’t them. As Keith Richards put it: “I’d grown sick to death of the whole Maharishi guru shit.”

So for their next record, Beggar’s Banquet, fans got a return to the Stones’ first love: American roots music. Their name, in fact, was taken from a Muddy Waters song.

And starting with the opening bongo lead-in on “Sympathy for the Devil,” you’ve got a four-record, four-year stretch that I think is unmatched in rock ’n’ roll history — Beggar’s Banquet, Let It Bleed, Sticky Fingers and Exile on Main Street.

A lot of stuff had piled up for the Stones over those boom years, and Exile was kind of like cleaning out the closet — some songs they’d been toying with since 1968 finally wound up committed to vinyl on Exile.

“We just kind of chucked everything in,” Jagger once said — there was so much, in fact, it had to be a double album.

In his book-length review of Exile for the 33-1/3 series, Bill Janovitz says that let-it-all-hang-out vibe is what makes Exile his favorite record of all time. “That lack of inhibition of almost any kind,” he writes, “might be the single most winning trait on the album.”

How it all came together only adds to the legend. Crushed by a looming tax bill in England, the Stones had fled to Europe — thus their “exile.” Keith Richards rented Nellcote, a mansion overlooking the French Riviera — the same perch from which Nazis ran the South of France just three decades earlier. That’s exactly how the bad boys of rock ’n’ roll would play it.

Somehow, in that summer of 1971, they got some work done, too. Often in the early morning hours, after a long night of partying, they’d set up in the hallways in the basement for the haunting sound. Jagger might fly in from Paris for a day at a time to lay down some vocals; Bill Wyman hated the scene and only appears on eight of Exile’s 18 tracks. The end result was more like fragments of a record.

Finally, with gendarmes wised up to the scene, Keith had to banish the biggest troublemakers from Nellcote. The party was over. Mick took the Nellcote tapes (along with some outtakes from their Sticky Fingers sessions in London) and went to L.A.

Nellcote gave Exile its soul; Los Angeles was where it got its lasting polish.

This little moment is worth a bit of reflection in the arc of the Stones. At the end of that summer, Keith was in the depths of heroin addiction, but he somehow managed to work his collaborative magic one more time. Mick took the baton from his friend since grammar school and finished the job, leading the L.A sessions. The balance of power tilted at that moment, and the post-Exile Rolling Stones would be Jagger-led and never quite as great again.

In Los Angeles, some of the era’s epic session players were brought in to join the band to piece the fragments together. Some songs had to be cut all over again from scratch. When the album and its first single (“Tumbling Dice”) hit the radio, both went right to No. 1.

Apparently not everyone was ready to mellow out quite yet. But this was something different — not the clichéd bad-boy rock ’n’ roll of the variety Led Zepplin was pumping out. It was a celebration of where the music came from — heartfelt, sad at times, defiant at others. It’s filled with gospel, country, R&B, and a few straight-ahead rockers. As the critic Lester Bangs wrote, “Exile is about casualties and partying in the face of them.”

Casualties, partying, sadness, defiance — I think the word we’re all looking for here is “the blues,” and the Stones, really just a bunch of working-class English boys, had ’em.

Almost immediately after the record came out, the Stones set off on the notorious S.T.P. (“Stones Touring Party”) American tour so memorably documented in Robert Greenfield’s book of the same name — a book Rob Reiner must have read prior to making Spinal Tap.

And next month, the much-discussed but rarely seen footage of that tour and recording sessions for Exile taken by photographer Robert Frank (whose photo graces Exile’s front cover) is finally seeing the light of day when the new documentary Stones in Exile comes out on DVD.

Who could have guessed that all this stuff would be getting unearthed and pored over all these years later? The musicians never know what they’ll be remembered for. That’s for the fans to decide.

Mick Jagger has seemed a little bemused in interviews over the years that the legend of the glorious wreckage that turned into Exile keeps growing. But Keith Richards has no doubts. Just last week, he told his superfan Jimmy Fallon that Exile on Main Street “deserves a second run.”