Out of the Shadows Theater brings awareness and transforms lives 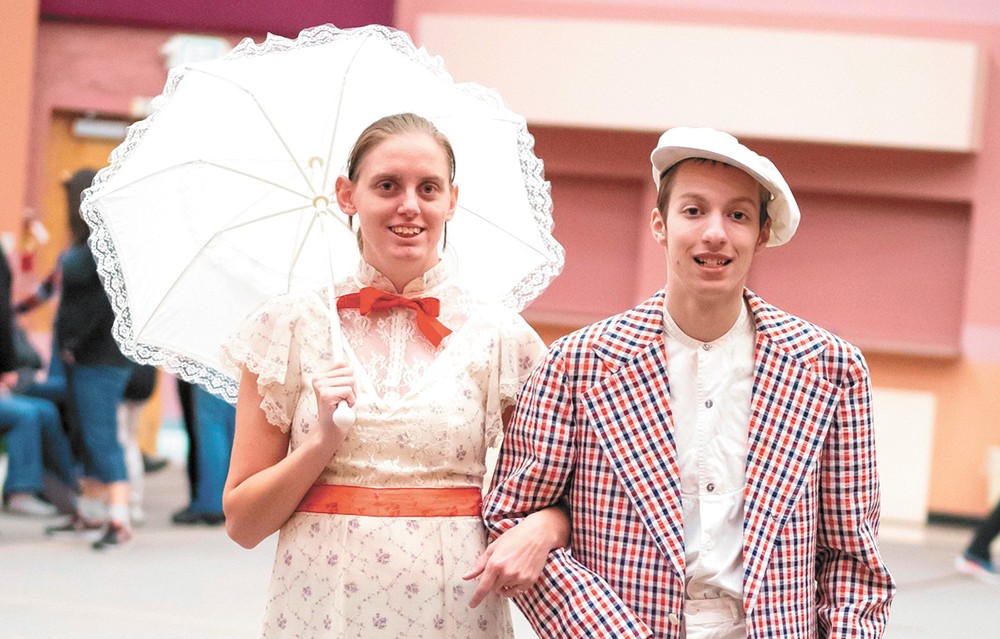 Theater is inherently transformative, as setting, narrative, and the actors transport us to other places, times and realities. But for the people involved with Coeur d'Alene's Out of the Shadows Theater, the transformation is less about costumes and stage makeup and more about building up people whom society continues to overlook.

In Out of the Shadows' current production of The Music Man, 32 actors span the panoply of so-called special needs, from limited mobility in wheelchairs to autism to Down syndrome. And yet, watching rehearsals, it's difficult to tell many of the actors from their "shadows," volunteers who attend rehearsals and will appear on stage — dressed in black to minimize their presence — to support "their" actor.

For Tim Neary, shadowing daughter Megan is more than just redirecting her if she misses a cue.

"We're doing it together," says Neary, who acted in high school and appreciates the guts it takes to get on stage. He's Megan's full-time caregiver, and they spend roughly six hours weekly at rehearsals, which began in late summer, and even more time listening to show tunes in the car.

Theater has impacted his family in numerous heartfelt ways, says Neary, whose wife was also active in theater and got the couple's three girls involved in Out of the Shadows four years ago.

"Theater gave [daughter] Emma confidence and purpose," says Neary, so much so she is now an online student at University of Idaho considering occupational therapy and theater. She's also a vital member of Theater Arts Center at the Lake (formerly Liberty Lake Community Theater). Neary's youngest daughter, Michaela, stole the show with her cuteness and just a single line of dialogue when she first appeared on stage, says her father. Since then, she literally found her voice to sing in last year's production of Mary Poppins.

The credit, says Neary, goes to Out of the Shadows founder Wendy Carroll, and the supportive crew, all volunteers, many with a long history in regional theater. Neary and Caroll met through Special Olympics, as well as through her son, Toby, for whom Neary was a caregiver.

Toby inspired her to create Out of the Shadows in 2016, says Carroll, who tapped her experience of four decades working in film and theater. Carroll, who serves on the board of Special Needs Recreation, would like to see more opportunities for adults with special needs in the arts and other areas. "They're going to be adults a lot longer than they're going to be kids," she says.

The Music Man, running the next two weekends, features all ages, from preteen to senior citizen, says Carroll, with lots of possibilities for roles: singing, dancing, being out in front, but also being out of the spotlight. Just not in the shadows anymore.

The original print version of this article was headlined "Character Development"