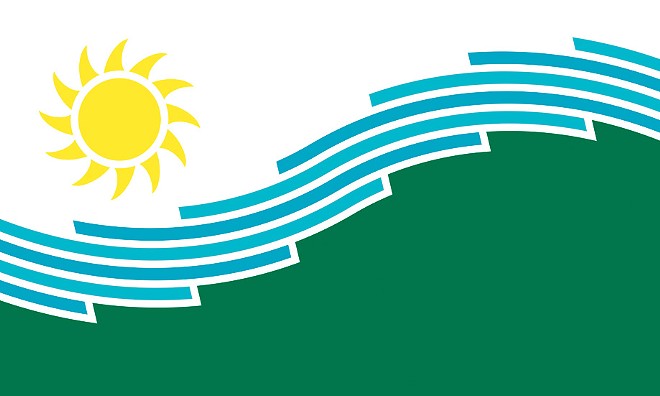 pokane is getting a new flag after residents voted for their favorite among 300 submissions that were ultimately narrowed to 12 finalists.

The winning flag was designed by Derek Landers, the art director at local apparel company The Great PNW, co-founder of Spokane Print and Publishing Center and owner of Landers Design.

"I was actually a lot more excited than I thought I would be," Landers says of learning his design won. "It hit me differently after I got the email and my boss — I was at work telling everyone — was like, 'You're gonna be in the history books, man!'"

The flag features a yellow sun in the upper left corner on a white background, recognizing the Spokane Tribe, as Spokane means "Children of the Sun" in Salish. Below that are blue flowing lines, representing the Spokane River, over a solid green base representing the land and trees, which rises diagonally from the lower left to the upper right of the flag. His design was initially created in 2019 when the Inlander asked local artists to reimagine the city's flag.

"For something like a flag, you're trying to generate some kind of civic identity that people can look to and say, 'This represents Spokane,'" Landers says. "We have the Spokane River, which is pretty iconic, and has been around a long time, and will hopefully outlast these other things that may come and go as a trend or landmark."

Landers says that while some have already criticized his design for not including something like the Pavilion or the Clock Tower or Spokane Falls, his 24 years of design experience have taught him that simplicity is key.

"This symbolizes the whole Spokane region rather than needing the Clock Tower or the garbage goat," Landers says. "It needs to be clean and simple and easily identifiable."

The public was allowed to vote on the design if they were a Spokane Public Library cardholder or a Spokane Tribe member. Ranked choice voting allowed the idea supported by the most voters to ultimately win. No one was paid for the designs.

"This was a contest; there was no compensation," Landers says. "I did it because 1) I was proud of my design, and 2) I love this city."

A dedication of the new flag is planned for sometime in June.

Is it time to update Spokane's official flag?

Marmot skull and crossbones, and 24 other Spokane flag ideas that would make Betsy Ross weep with jealousy