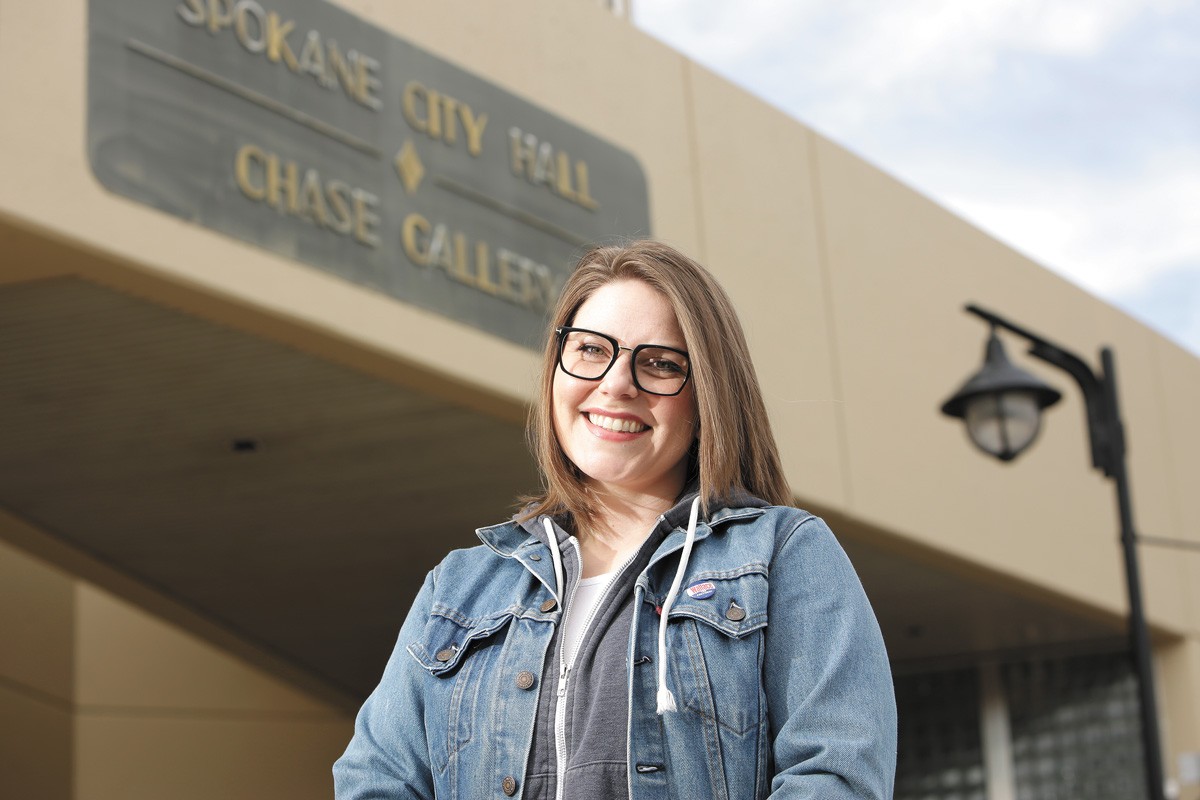 Young Kwak photo
As Kate Burke says, "I think you never really know what type of politician you're going to be until you're making the calls."

The moment that sums up Kate Burke's tenure on the Spokane City Council didn't happen inside City Hall. It happened just outside the entrance. At the end of her first year in office, in the midst of a battle over the city's failure to provide warming shelters for the homeless, a homeless encampment dubbed Camp Hope sprung up on the City Hall sidewalk.

Burke had delivered plenty of impassioned — and even angry — speeches about the city's failures on homelessness from the council dais, tears in her eyes, but when it seemed like the police officers were on their way to tear down the camp, Burke went further: She chained herself to other pro-homeless activists at the encampment.

"It was a really big highlight for me," Burke recalls. "I was actually very scared."

While the police didn't show up that day, Burke's actions drew a torrent of scorn and praise. Supporters chanted her name, detractors called her "embarrassing" and filed an ethics complaint against her. Former TV anchor Nadine Woodward wielded the incident in her attacks on the City Council during her successful campaign for mayor.

Burke's tenure was bound to be controversial. She's a self-proclaimed Democratic Socialist who got elected to represent northeast Spokane, the most conservative district in the city. Yet her time on the council is drawing to a close. She's in the final year of her first term and has chosen not to run for a second.

Most of Burke's efforts to transform the city have ended in stalemate or defeat. But in some ways — some raw and personal — she says she managed to transform herself.

"I think you never really know what type of politician you're going to be until you're making the calls," Burke says. "We're all on a journey."

Burke didn't campaign as a radical.


In her 2017 candidate interview with the Inlander, she downplayed partisan ideology, talking instead about things like bike paths, street repairs and the opioid epidemic.

During her campaign, she enthusiastically agreed that the city needed more police officers along with more spending on mental health and addiction.

Today, by contrast, she fully embraces the rhetoric of "defund the police," having called the current model of policing "both unsustainable and intolerable" and "historically rooted in the oppression of Black bodies."

Burke wasn't hiding who she was back then, she says. She was a "middle-of-the-road type person."

But during that same time period, she says, she was in the middle of an ideological transformation. She was reading books like Howard Zinn's People's History of the United States, which recasts the story of America's past through the lens of atrocity, oppression and public uprising. She's dating NAACP Criminal Justice Chair Devon Wilson — a Black man — and she says he helped her see what she had missed.

So by the time Burke took office, she was as intent on calling out injustice, no matter how many feathers it ruffled, as on fixing potholes.

In the first few weeks, however, it was what Burke didn't say that caused the most stir. As all the other councilmembers recited the pledge of allegiance at the beginning of each meeting, Burke stood silent and declined to put her hand over her heart. At the time, she says, she wasn't even sure why she declined — she just didn't like the forced ritual.

"It kind of reminds me of Nazi Germany," Burke says. "It just feels weird to me."

"I've always known racism is bad, but what I didn't realize is that these injustices were at every single corner of every single thing we do at the city."

For some members of the public, like Jonathan Bingle, a former pastor now campaigning for Burke's seat, her stance was deeply bothersome. He saw it as a failure to show respect for our great, though imperfect, country and Constitution.

"Frankly, I'm glad she's not going to have another term," Bingle says.

From some corners, Burke was praised for her efforts to champion the disadvantaged and the downtrodden. She held town halls about the housing crisis. She rallied together elderly north Spokane tenants to push back on a proposed rent hike at their apartment. She decried a proposed Sportsplex for wasting money that could have been spent on housing, opposed multifamily tax exemptions for not requiring enough affordable housing units and argued that using Geiger inmates for roadside cleanups was a "form of slavery."

Naghmana Sherazi, another candidate for her council seat, considers Burke both a friend and an advocate for low-income people like her. Burke's decision to chain herself outside City Hall was a perfect example of her ability to draw attention to important issues, Sherazi says.

"It's not something I would do, but Kate is Kate," Sherazi says. "If she hadn't done that, I don't know that we would have gotten that kind of awareness around it."

But in other corners, Burke became a symbol of everything they despised, the equivalent of the picture on their dartboard. Sometimes, Burke says, she'd enter a restaurant or a cafe, and strangers would start yelling at her.

Yet Burke didn't just clash with right-wingers. She fought with other councilmembers. Even before she came into office, she accused City Council President Ben Stuckart of not taking concerns she'd raised about sexism and sexual harassment seriously.

The clashes between Stuckart and Burke — and sometimes other councilmembers — spilled out onto the council dais. ("Thank you for the lesson, Council President," Burke snarked at the end of one exchange.)

Burke doesn't regret her strong stands or chaining herself outside City Hall. But she does regret how she treated her colleagues sometimes.

"I was a self-centered alcoholic," she says.

Burke publicly revealed her struggles with alcoholism at a Council Finance Committee meeting last year. Today, she says her alcoholism was connected to her desire to control everything around her.

"I thought I was running the puppet show," she says.

She said she had to learn to relax and stop thinking of her colleagues as "the enemy." Sometimes that meant compromising.

Early this month, Burke voted for the Spokane Police Guild contract as "moving in the right direction" with a "little bit of police oversight" but also said she was "disheartened" that the police reform discussions they had marched for hadn't taken place.

At one time, Burke says, she probably would have condemned the contract as "ridiculous," argued the council wasn't listening to the community and angered her colleagues in the process.

"I wanted to come in and do all the great things, and I was going to take down anybody in my way," she says. "I've realized that doesn't work. My way isn't working."

If it hadn't been for COVID-19, however, Burke is certain she would have run for a second term. She was politically ambitious: Back in 2007, when she was only 17, she told the Spokesman-Review she had her eye set on running for City Council.


"My work is my life, my work is my passion, my work is everything," Burke says. But then all of a sudden the COVID lockdowns hit, and half of her workload disappeared. At first, she felt emptiness, the realization that she'd let the cherished things in her life wither.

"I was so motivated and so focused on deadlines and getting things done... that I just was never really living life," she recalls.

She spent more time in her house, with her two dogs and her partner. She says parts of her personality that had been dormant reemerged, like her sense of humor. She got back into her old hobbies, like gardening. And she finally took time to address her personal health.

"I was diagnosed with four different things in April," Burke says.

She got a surgery to diagnose and address her endometriosis, a painful condition that results when endometrial tissue grows outside the uterus. In many ways, her priorities began to change.

"There's a lot of ways to give back to your community," Burke says. It didn't necessarily have to be City Council. Her partner, Wilson, is now enrolled at Stanford Law School. Burke says she's considering going back to school herself.

"I don't think every single person needs to take up the allotted time they are possibly allowed," Burke says. "There's room for other people."

While Burke managed to pass a bill banning the use of high-pitched "mosquito" devices targeted at young people downtown, she never won enough support for her homeless bill of rights or got her tenant rights ordinance passed. But she still has nine months left in her term, she says. Maybe a tenant rights ordinance would be a "cool going-away present."

The candidates vying to fill her seat have different opinions on Burke, but they all praise her passion.

"I respect Kate; she believes in what she believes, and she goes after it," says Luc Jasmin III, who's running against Bingle and Sherazi for the northeast seat as "more of a moderate voice."

Northeast Spokane is unpredictable, as longtime observers know. They've elected both conservative Republicans and a Democratic Socialist progressive like Burke.

"I think my district is really just wanting someone who is going to fight for them," Burke says. "I really do think that my constituents are proud of what I've been doing." ♦

The original print version of this article was headlined "The Radical"