Morihiko Nakahara can't remember exactly when he started conducting the Spokane Symphony's annual Holiday Pops concert. It was likely in 2003, his first year with the organization. And by his own estimate, he's led 13 or 14 of the orchestra's Holiday Pops programs in the almost two decades since, having ceded a handful of occasions to the music directors at the time or headlining guest artists traveling with their own conductors.

"It was sort of in my job description, even though there really wasn't a job description in a traditional sense," he says. "It's almost like I can count on being in Spokane the first weekend after Thanksgiving for The Nutcracker and then a couple weekends later for Holiday Pops. Those were usually sacred dates in my calendar."

With the ever-accelerating passage of time, it's understandable that the specifics may have started to meld and blur by now. On top of his regular appearances with the Spokane Symphony, Nakahara took up the music directorship of the South Carolina Philharmonic in 2008 and was hired four years ago to teach orchestral studies at the University of Massachusetts Amherst, which has led to constant bouncing between coasts and regions to fulfill his professional gigs. 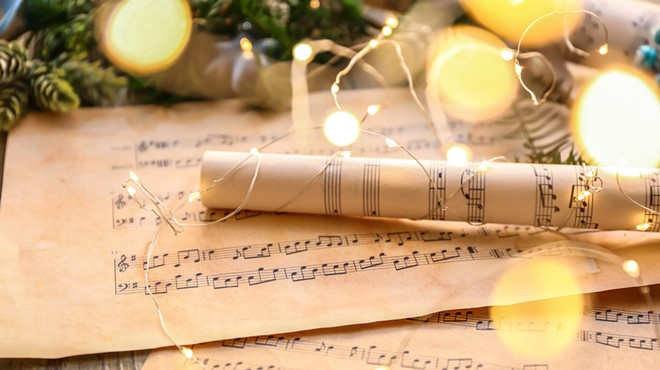 But there are still Holiday Pops shows, for better or worse, that bubble to the top of the stew of memories.

Like the one in 2005. Or was it 2006? Either way, it was still early in his tenure and long before smartphones and all their attendant technology. In a last-minute frisson of holiday spirit, the symphony's then-director of marketing, Annie Matlow (today a major promoter of the Northwest BachFest), had urged him to pick up a Santa costume from a rental shop somewhere in Spokane Valley. After a few wrong turns down unfamiliar streets, Nakahara thought he'd found it.

"This place, it looks like they sell tractors. But, I guess, during the cold months they do other things — including, apparently, renting out Santa costumes? So I go into this place, and the only size they have is extra large. It was literally the only one they had left. And I'm like, well, it's just going to have to do."

Out of a sense of necessity, expediency and duty, he suited up in the oversized outfit as best he could and took his position center stage.

"I'm wearing this thing at the concert, and obviously I'm swimming in it. It was way bigger than the size I needed. But I'm not going to do the entire concert in it, right? Usually, when you do the costume stuff, you do a piece or two and then you can change back out into your normal concert attire," he says.

"So I'm conducting — and when I conduct, I'm pretty active. And I'm starting to feel that sensation when things are kind of coming loose. It's one of those wardrobe malfunctions where you can't really stop and put your hands down and pull up your pants. Eventually, you know, I just gave up. I'm like, I've got a job to do here, so I'm just going to let gravity take its course."

Although he was spared some of the more acute embarrassment by the fact that he was wearing his tuxedo pants under the gargantuan Santa trousers, Nakahara nevertheless refers to the incident as the "infamous striptease." And it had an upside: "Annie never asked me to wear any kind of costume after that."

"I'm just looking forward to being back at the Fox. There's something magical about the Fox, especially during the month of December."

Dressed safely in standard tailored formalwear, Nahakara will lead the Spokane Symphony at the Fox Theater once again for this year's Holiday Pops performance.

"I'm looking forward to being part of this collaboration with the Sweeplings. The orchestra is going to have their usual dazzling display of virtuosity with standalone pieces between these original arrangements we're doing with the band. I'm very eager to see how it will all come together with the big orchestral backup," he says.

"But more than anything, I'm just looking forward to being back at the Fox. There's something magical about the Fox, especially during the month of December. And it's the first Holiday Pops in two years, so this one in particular is going to have a special meaning. It has a bit of a homecoming element. I can't wait to be back there." ♦

The original print version of this article was headlined "Sacred Dates"