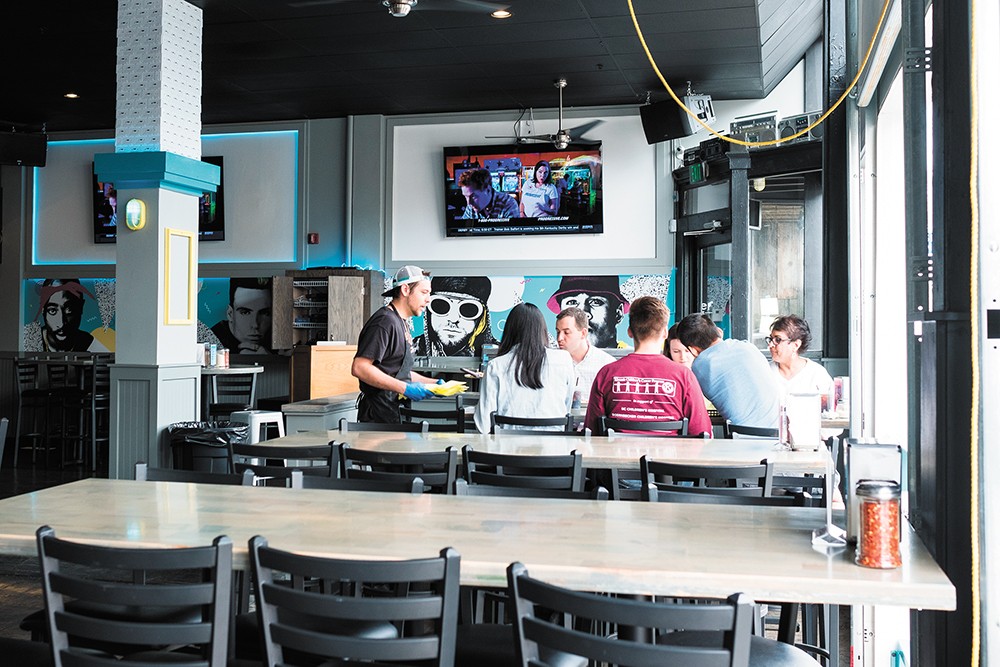 Hector Aizon Photo
Boombox Pizza is all about that '90s throwback.

Britney Spears and Biggie Smalls watch dutifully over the bar where slices of pizza left over from lunchtime slowly spin like records on a turntable.

A wall mosaic of old speaker boxes frames the restroom doors at Boombox Pizza, the newest addition to the block of bars at Division Street and Main Avenue sometimes referred to as the "Bromuda Triangle." A pair of open garage doors let chatter and the smell of pizza waft into the street.

The new joint is sandwiched between Borracho Tacos & Tequileria and Fast Eddie's, in a space where Revolver bar used to be. This now makes a near monopoly on the block's west side for business owner Jeremy Tangen.

"When the old Revolver spot came up for sale, it just made sense to control this whole block," says Jason Martinez, operations manager for the group that owns the two adjacent bars.

"We realized there's a lack of pizza options for lunchtime and dinnertime diners over on this side of town. We already do burgers and sandwiches at Eddie's and tacos at Borracho, so we wanted to do something different."

The place is completely decked out in 1990s music gear. Aside from the wall of speakers (Martinez says they purchased the entire collection from two people they found on Craigslist), old school boomboxes sit atop the door and cassette tapes are plastered to pillars in the middle of the room.

The New York-style pizzas are also named with '90s nostalgia in mind, such as "Saved by the Bell Pepper," "Rage Against the Supreme" and "Baby Got Back."

The most popular so far, Martinez says, is the "Ice Ice Baby," topped with mozzarella, garlic white sauce, chicken, bacon, tomato and onion. Full pies are 16 inches ($13-$23), with the option for a 12-inch that's gluten free, or $3 single slices. Boombox also serves wings, salads and breadsticks.

The Flaming Lips wings are super spicy, Martinez says, but other than that, the fare is nothing fancy. "It's meant to be good and cheap," he says.

Weekly on Tuesday, Friday and Saturday, Boombox hosts karaoke from 9 to midnight, and on Thursday its specials are $1 Bud Lights, $2 Rainier tall boys and $2 Capri Sun shots, for which bartenders actually take a syringe and inject vodka into a Capri Sun juice pouch. Daily from 4-5 pm is "Power Hour," offering $2 slices, Rainiers and Bud Light drafts.

"We like the simpler times back in the '90s," Martinez says. "It seems things have gotten expensive and fancy just to go get some pizza and beers, but it's not gonna be that at Boombox." ♦

The original print version of this article was headlined "Cowabunga, Dude"