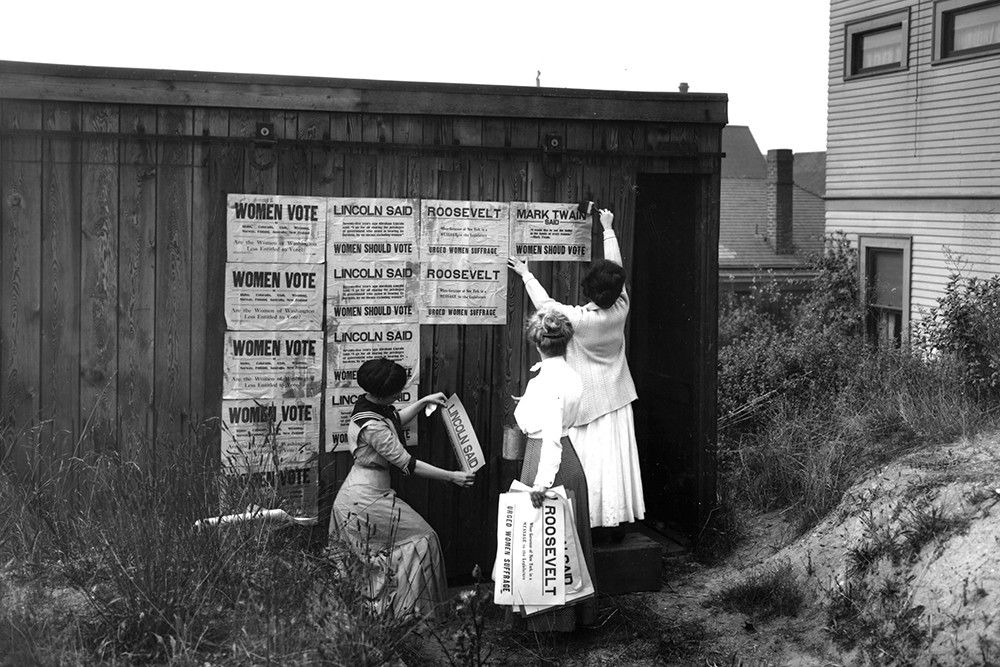 One-hundred years after women around the U.S. won the right to vote, women's causes have once again taken center stage.

After the 2016 election, the country was met with the most visible expression with an explosion of now-annual women's marches. While plenty of attention was paid to pink "pussy hats" knitted for the cold weather and to the bright red smocks and white blinders worn in imitation of dystopian handmaids, many of the women (and their allies) marched to remind the country they'd fight to protect their rights, which had been hard-won in incremental steps over the better part of two centuries.

In many ways, the modern marches hearken back to the foundation laid by the women's suffrage movement. And while that movement started in 1848 in New York, it's undeniable that the swiftest progress to enfranchise women's rights occurred in the West.

Washington Territory could have been the first to give women the vote back in 1854, but that bill failed to move forward by one vote. After a visit from suffragists Susan B. Anthony and Oregon-based Abigail Scott Duniway in 1871, Washington women got the vote in 1883. But the territorial Supreme Court overturned that. Women got the right again in 1888, but it was overturned again, the Washington Secretary of State's office notes, "because women voters were making sales of liquor more difficult with their votes," leading the liquor lobby on a rally to repeal their rights.

By 1910, Washington and several other Western states had enfranchised women, but not always for the right reasons, explains Veta Schlimgen, associate professor of history at Gonzaga University.

Wyoming became the first territory to let women vote in 1869, partly to attract more women to the territory where men outnumbered them six to one, and partly because some were incensed that black men could vote in a post-Civil War America, according to the Wyoming Historical Society.

"In Utah, the idea was that women should be allowed to vote to help support the Mormon faith in Utah, to outnumber non-Mormon men," Schlimgen says. "In other places, they wanted to enfranchise women because they were worried the non-white population of men was going to outnumber white men."

Women's efforts in the West and across the country at the time weren't limited just to temperance and suffrage, but the two were closely linked. On top of those causes, African American suffragist Ida. B. Wells fought lynching, while Native American Zitkala-Sa, aka Gertrude Simmons Bonnin, preserved her Lakota heritage at a time when Native Americans were told to assimilate, Schlimgen says.

"The only way to have power was being able to vote," she says.

The country would eventually let women vote with the 19th Amendment in 1920, preceded by decades of work by women in the Pacific Northwest who lobbied for suffrage around the U.S.

The most famous of the Inland Northwest's leaders was May Arkwright Hutton, who worked not just to improve the status of women but also laborers.

May was known for her big personality and physical presence, an affinity for flashy hats and clothes and her unflinching humor and independence. She got her start working 14-hour days running boarding houses and kitchens in North Idaho mining camps before meeting her husband Levi "Al" Hutton. The couple invested about $5,000 in the Hercules Mine and became millionaires, soon moving to Spokane to live in the upper crust, according to James Montgomery's 1974 book Liberated Woman: A Life of May Arkwright Hutton.

May entertained union leaders and famous politicians (even once hosting a dinner for President Teddy Roosevelt), making her the prime Eastern Washington stop for suffragists such as Carrie Chapman Catt, who led the national women's movement after an elderly Susan B. Anthony stepped down in 1900.

Shortly after moving to Spokane, May told the Spokesman-Review, "I believe in woman suffrage for the reason 'that taxation without representation is tyranny.' ... That man is not woman's keeper, and has no more inherent right to think and vote for her than he has to suffer for her crimes. That woman is intellectually, morally, and physically qualified for citizenship."

While she wouldn't live to see suffrage get its national day in 1920, May lived to see Washington women get the right to vote in 1910. Shortly after, she went on to be a delegate to the national Democratic convention in 1912.

"The West will lead the East in this reform as it has in many others," May wrote in another letter, "and I predict the time is not far distant when all American women will be free in all the word implies." ♦

Gonzaga University is hosting a series of events focused on women's rights this year called "19th and Counting." Some include speeches on influential suffragists, how iconography and fashion have been used over the years, and on March 25 there will be a public parade on campus including characters dressed as suffragists of the past, as well as some modern-day icons. The full slate of events can be found at gonzaga.edu/womenvote.