PARKLAND, Fla. — Seventeen people were killed in a shooting Wednesday afternoon at a high school about an hour northwest of Miami, law enforcement officials said. The dead included adults and students.

“This is catastrophic,” he said. “There really are no words.”

A federal official said the gunman had been identified as Nicolas Cruz, 19. The sheriff said the gunman was a former student. He was arrested about an hour after leaving the school in Coral Springs, a neighboring city.

The gunman was armed with a semi-automatic AR-15 assault rifle, Israel said, and “countless magazines.” 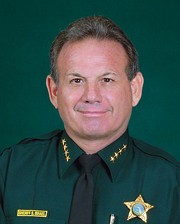 Broward County Sheriff Scott Israel: “This is catastrophic."
Students ran out of the school, Marjory Stoneman Douglas High, holding on to each other, as law enforcement officers swarmed the building armed with military-grade weapons. Parents rushed to the area to be reunited with their children.

Students and staff “heard what sounded like gunfire” near dismissal time around 2:40 p.m., according to the Broward school district.

“The school immediately went on lockdown but is now dismissing students,” the district wrote on Twitter. “We are receiving reports of possible multiple injuries.”

Dianna Milleret, 16, a 10th-grader, heard the gunshots. “It was several loud sounds. I tried to stay calm. Students were running everywhere,” she said, on a street two blocks from the school.

Noelle Kaiser, 17, was in history class when the alarm went off Wednesday afternoon. The class was gathered just outside the building when she heard three distinct gunshots.

“I am in shock,” she said softly after clutching her mother, Cheryl Kaiser, on the sidewalk. Cheryl Kaiser had rushed from work in Delray Beach.

Noelle called her mother from outside, near the edge of the campus, to let her know she was safe around 2:50 p.m. “I was still so scared because the person had not been caught yet,” she said.

“My prayers and condolences to the families of the victims of the terrible Florida shooting,” President Donald Trump wrote on Twitter. “No child, teacher or anyone else should ever feel unsafe in an American school.”