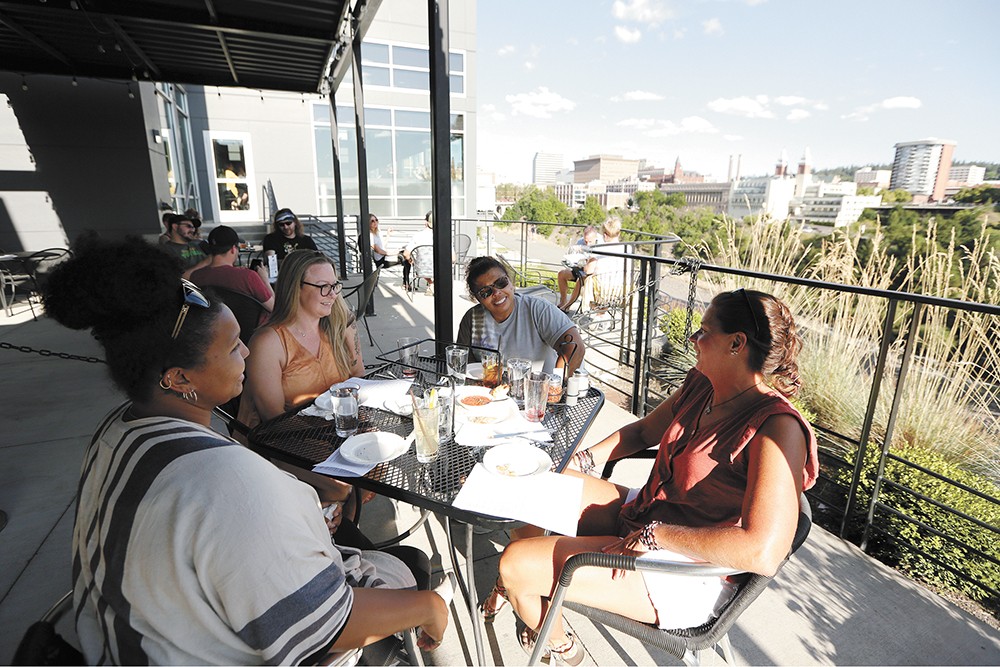 Young Kwak photo
Veraci's patio view is tough to beat, as is the great deal on slices.

It's July in the Inland Northwest, which means we're in peak patio season. Restaurants in our region offer everything from the spartan picnic bench by the parking lot to dramatic views at tables you won't be sitting at without reservations. Then there's the middle ground, those patios that bring so much more than food to your table but don't take much from your wallet in exchange. They're the perfect patios, and these are just a few of them:

Veraci Pizza
1333 W. Summit Pkwy., 389-0029
Sneak out of the office early and grab a spot on the back patio, where you'll see the downtown skyline serve as a backdrop over sweeping views of the Spokane River Gorge. Getting in before the rush allows you to land a premium spot on the cheap, because during happy hour (weekdays from 3-5 pm) slices are $1 off. I almost always go for the Green Dahlia, a pesto-based pie with Roma tomatoes, red onions and mozzarella, because it seems like a semi-healthy after-work snack. Inevitably, though, I'll pair it with a pint and a slice of the weekly special and wind up eating half a pizza before dinner.

El Que
141 S. Cannon St., 624-5412
Pacific and Cannon in Browne's Addition is the patio capital of the Inland Northwest. There are six places to grab a bite, all great, and they each offer outdoor seating. You can't go wrong, but I normally go to El Que. For a few years, while living in Browne's, its three tacos with rice and beans combination plate ($13) was a staple of my diet. Especially on Wednesdays, when I could throw in a margarita for just $5. If you're in the mood to share, its big plate of nachos ($10) loaded with the works is perfect and easy to split among friends.

Roger's Ice Cream & Burgers
1224 E. Sherman Ave., Coeur d'Alene, 208-930-4900 (also in Post Falls and Hayden)
At Roger's there's only one thing on the menu over $10, and it features a four-patty monster of a burger. That's more than a bit too much for me, so I normally stick with the classic cheeseburger ($4.02) before walking back to the window and ordering an ice cream for dessert. The walk-up service and exclusively outdoor seating makes Roger's a delicious blast from the American past. It's centrally located in Coeur d'Alene, but just far enough from downtown to escape tourist season crowds. There are a few other locations around North Idaho, though you should save those for inside season. This spot is the summer classic.

No-Li Brewhouse
1003 E. Trent Ave., 242-2739
This is the kind of patio you'll want to spend a long time on, especially during hot summer afternoons. Mild breezes drift across the patio from the Spokane River, which runs calmly past just a few feet away. It's the perfect place to cool off while putting back a couple of pints. The crispy halibut sandwich ($14) fits the chill, riverside setting and the punchy chipotle corn pasta that comes with it is super filling. This may be the spendiest patio on the list, but the hearty food and great setting make it well worth the money.

Zola
22 W. Main Ave., 624-2416
Sitting smack dab in the middle of what is arguably the most hip and happening block in the entire city of Spokane, Zola's patio is perfect for people watching. The food isn't bad, either. When I visit just for drinks, it's hard to pass up the tavern fries ($5.95) which are among the best in town. Crispy and golden brown on the outside but soft on the inside, and served with a gorgonzola dip that adds a good bit of bite. The sliders ($13.95), both the classic beef and the pulled pork, work equally well as a main course or to split with friends as a snack. It's closed temporarily, citing the spike in COVID-19 cases in the area, but it'll be back. ♦