Pay raises should have been a huge win for Spokane teachers. Instead, it backfired 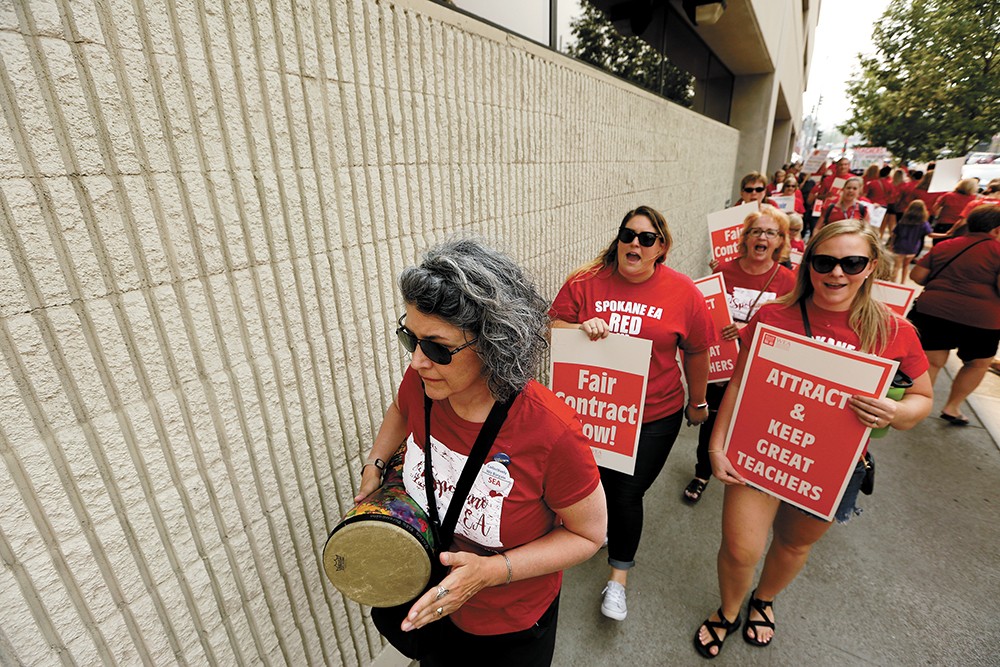 There was a buzz among the teachers as they filed into the Shadle Park High School gym last August. They were told a deal with district officials had finally been reached.

They crammed into the bleachers, ready to vote on a new contract that would give most teachers and staff members double-digit pay raises. In the hours before the meeting, they flipped through packets in coffeeshops, scrambling to understand the deal. They wore red, signaling their solidarity with the rest of the teachers union. And when Spokane Education Association President Katy Henry announced the final tally — 95 percent voted "yes" — more than 1,500 educators erupted with cheers.

"The tone of all the communications that came out was that it's a success and everyone is happy," says Stephanie Oakes, a school librarian who was there that day.

But already, the writing was on the wall for widespread layoffs affecting hundreds of teachers in Spokane Public Schools. The school district had to dig deep into its budget to pay for the raises. The night before the teachers' contract was ratified, the district projected a $12.6 million budget shortfall for the upcoming school year. The outlook for the following school year was even more grim.

It's why Spokane Public Schools announced last month that a total of 325 staff members — those with the least seniority — will be laid off due to the budget deficit. More were placed on "involuntary transfer" to a new job within the district. Oakes, a part-time employee who's been with the district for six years, is one of those placed on involuntary transfer. After what she'd heard back in August, she was thrown off when the layoffs were announced.

"I had no idea anything like this was in the works," she says.

The layoffs have surprised some teachers, but school districts largely saw this coming. Similar projected layoffs have occurred to varying degrees in districts across the state. Even though the Washington State Legislature has added billions of dollars in recent years to fund schools — and even though this week they passed a law allowing more flexibility for districts to raise money locally — it likely won't be enough to prevent layoffs for many local teachers and staff members in Spokane and other schools.

In a way, both are right.

For the better part of this decade, discussions about school funding have been dominated by the McCleary case, a major lawsuit in which the state Supreme Court held the Legislature responsible for underfunding schools. In particular, the case highlighted how a lack of state money forced districts to rely on local taxes, or levies, to pay teachers.

The case was put to an end last year, after the state Legislature pumped billions of dollars into education over the course of the previous two sessions. At the same time, however, the state put a cap on the amount of money a district could raise through those local levies.

What that meant was that all of the sudden, school districts had an influx of new money, at least temporarily. Under the new funding formula, Spokane had $45 million in increased funding in 2018-19 compared to its budget two years before. And that's after accounting for the loss of $21 million in local levy dollars.

Teachers unions, who argued teacher raises were long overdue, said the new money from the state in 2018 was earmarked for teacher salaries. The Spokane Education Association was seeking $28 million toward teacher salaries. Some districts pushed back on that. The State Office of the Superintendent, meanwhile, didn't provide much clarity. What the agency did say is that districts should be limited "by what you can afford and what you can sustain."

That advice wouldn't stick, however.

As teacher unions across the state held strikes for higher pay, school districts negotiated pay raises for educators often in the double digits. Spokane teachers saw an average 13.3 percent pay bump; Mead teachers a 15 percent bump. It was a win for teachers — or at least ones experienced enough not to lose their jobs.

In Spokane, the raises were generally larger for teachers with the most experience. First-year teachers with a master's degree might not get a raise at all. "Thanks to [Spokane Education Association] for making me feel less valued than my other colleagues," one teacher wrote under a Facebook post by SEA celebrating the raises.

Oakes, too, felt left out. She was happy for everyone who did get a raise, but says, "As someone who did not benefit, it didn't sit quite right for me."

Meanwhile, Spokane Public Schools was projecting a budget shortfall. All that extra money from the state? Gone. The district devoted roughly $30 million more to salaries for certificated and classified staff in 2018-19 compared to the prior year. The budget was in the red. And the outlook was even worse for the 2019-20 school year, when revenue from local levies would drop even more and the district projected a $31 million shortfall. Spokane, for instance, projected $6 million less in General Fund revenue in 2019-20 compared to this year because of the loss of local dollars.

"When we bargained, we did not anticipate that this might happen."

And yet Katy Henry, Spokane Education Association president, says she was blindsided when the layoffs were announced this spring.

"When we bargained, we did not anticipate that this might happen," Henry says.

When asked if she was concerned with the budget deficit following negotiations, Henry says she wasn't because the school district has "healthy reserves." The union simply bargained for the money the state gave districts for salaries, she says. If they didn't bargain for that money, her members would be questioning her.

District Superintendent Shelley Redinger, too, has repeatedly defended the salary hikes for educators, even though the district knew it was going over budget to do it. In her view, a lack of state funding meant districts had to play "catch up" with paying teachers, and it's important they have competitive salaries.

State Sen. Majority Leader Andy Billig (D-Spokane) says he's "distressed" by the layoffs. While he acknowledged that the bill passed by the Legislature had restrictions and "some confusing guidance" from the state superintendent, he says what schools do with state money is up to them.

"The districts knew what the funding situation was," Billig says.

State lawmakers like Billig, meanwhile, made some of their own decisions just before the end of the legislative session this year. Importantly, they raised the levy limit so that school districts can use local dollars to pay for nurses, mental health counselors or other programs voters want — as long as they don't pay for teacher salaries.

But don't expect districts to recall the layoffs they recently announced. Spokane Public Schools spokesman Brian Coddington says it's "conceivable" there could be some recall of the layoffs, but it's likely the majority of the layoffs will stand. In order to raise the levy, the district will need voter approval. If the district decides to seek it, that would likely be a vote in the fall, and the money wouldn't come until the following school year.

"Our next step will be to understand the detailed impacts of the legislative actions," he says. "We will take some time to understand the new local levy authority and present that information to the school board for discussion and consideration as part of our regular budget process."

As for the fact that the district is in the process of building several new schools — that will presumably need to be staffed — Coddington says there will be time to work through those issues.

Rich Wood, spokesman for the Washington Education Association, says the problem was that the state capped districts from collecting local levy dollars in the first place. Any blame for the budget issues shouldn't be on teachers unions negotiating for higher pay, he says.

"We've been consistent all along that voters believe they should have freedom and flexibility to meet the needs of students through local levies," Wood says. "It was about addressing a very real need."

Spokane Public Schools, however, has prioritized increased special ed funding from the Legislature. And the Legislature came through on that, along with another bill that makes up for the loss of more levy dollars in East Valley, West Valley and Spokane school districts next year.

West Valley and East Valley, however, aren't dealing with the same kind of layoffs as Spokane. West Valley is only laying a few teachers off, and they're losing other positions through attrition. East Valley reportedly isn't laying teachers off at all.

"When we negotiated last summer, our teachers association worked very closely with us and understood that we had a perfect storm ... that we were going to take a huge hit," Sementi says. "We were able to get a contract that was a little more equitable based on lack of funding." ♦

The original print version of this article was headlined "Teachable Moment"