A military mother dedicates her life to serving those who served 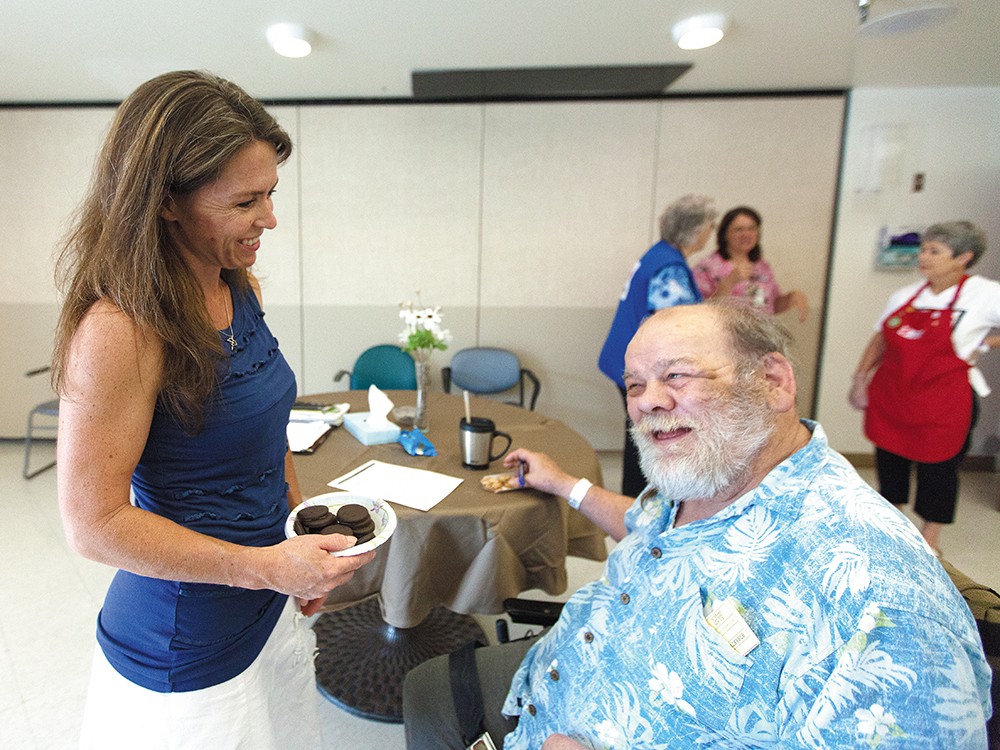 As several white-haired veterans file into the dining room, Keirsten Hess kneels to greet each one, crouching down beside their wheelchairs to offer hugs and whisper warm welcomes into their ears.

With a wide grin, Hess beckons them by name, calling them in for a monthly ice cream social at the Spokane VA Medical Center. Cookies, nuts, cherries and other toppings sit stacked on a nearby table.

“Chocolate or vanilla,” she asks a Hawaiian shirt-clad veteran. “What kind of ice cream do you want?”

Taking their orders, Hess piles scoops of ice cream and toppings into their bowls. Other regular volunteers, including her mother and teenage son, step up to help distribute the treats.

“Grab a bowl and grab a vet,” Hess tells them.

As the regional director of the Services to Armed Forces program with the American Red Cross, Hess coordinates a number of support, outreach and social projects to assist military veterans, active-duty servicemen and women, and their families.

Lively music starts up from a piano against the wall as more than a dozen veterans chat with volunteers over heaping dishes of ice cream. Finally slowing down for a moment, Hess scans the dining room to make sure everyone has been served. She smiles.

“Getting to do things like this is really the best part of my job,” she says.

Hess, a 42-year-old mother of two, has strong connections with the military community. She spent half her life as a military spouse, living on and off bases. Her oldest son and daughter-in-law, Jake and Bridget Hess, also recently shipped out to Afghanistan with the Marines.

In 2008, Hess had the opportunity to turn her lifelong passion for volunteering into a new career. She says the Eastern Washington regional office of the American Red Cross was looking to reinvigorate its support services for veteran and military families. It was a “perfect fit.”

“It’s pretty cool to be able to kind of build a program from the ground up,” she says, describing it as an incredibly challenging but rewarding experience.

Hess oversees many of the program’s social events, such as the monthly ice cream socials and barbecues at Fairchild Air Force Base. The program also offers a variety of classes on reintegration into civilian life, coping with deployment separation and other challenges.

For troops overseas, the Red Cross also provides a vital emergency communications relay, helping facilitate messages between service members and their families during times of crisis.

“We have a ton of programs,” Hess says.

Megan Snow, regional communications director with the Red Cross, calls Hess a hard-working advocate for veterans and military families. Coordinating a wide range of programs, Hess often scrambles from Fairchild to the VA Hospital to the downtown homeless veterans shelter.

“We honestly never know where Keirsten is during the day, but we always know that wherever she is, she is working tirelessly to provide meaningful support to our local military community,” Snow writes. “She amazes us every day with her passion, compassion, and fierce dedication to serving those who have served our country.”

Bret Bowers, the public affairs officer for the local VA hospital, says Hess understands the unique demands and challenges affecting veterans and military families. Her personal experience allows her to develop close connections with the people she serves.

“She’s kind of lived the military life without being a veteran herself,” Bowers says. “She’s been around vets, so they feel comfortable with her.”

Bowers says it’s typical to see Hess deliver a truckload of donations to the homeless shelter one day, then make her rounds visiting residents at the VA hospital the next. He says her energy and dedication never waver.

“Keirsten has a heart of gold for not only veterans, but military families,” he says. “She’s a tremendous friend to the VA and to the veterans she comes in contact with.”

“There’s a lot of energy in that little package,” Lind says.

After serving local families for nearly five years, Hess continues to work harder than ever, Lind says. She serves as an inspiring example of the difference an individual can make in his or her community.

“I can’t say enough nice things about her,” Lind says. “She is generous to a fault, thoughtful and she loves what she does. She makes you feel like you’re special when she talks to you.”

During a rare minute of rest in the hallway outside the dining room, Hess reflects on the many people she gets to work with and help out on a daily basis. She says society often dismisses its elderly veterans without recognizing what they have to give.

“They have so much wisdom to share,” she says of veterans. “They get it. They exhibit such … humility in everything they do.”

Many exemplify a sense of service, Hess says, living in a way that demonstrates generosity, caring and an appreciation for the small moments that mean the most.

“That’s really inspiring to me,” she says. “I just feel completely blessed to be able to wake up every day and go to work. I love my job.”

Speaking of Give Guide, Veterans