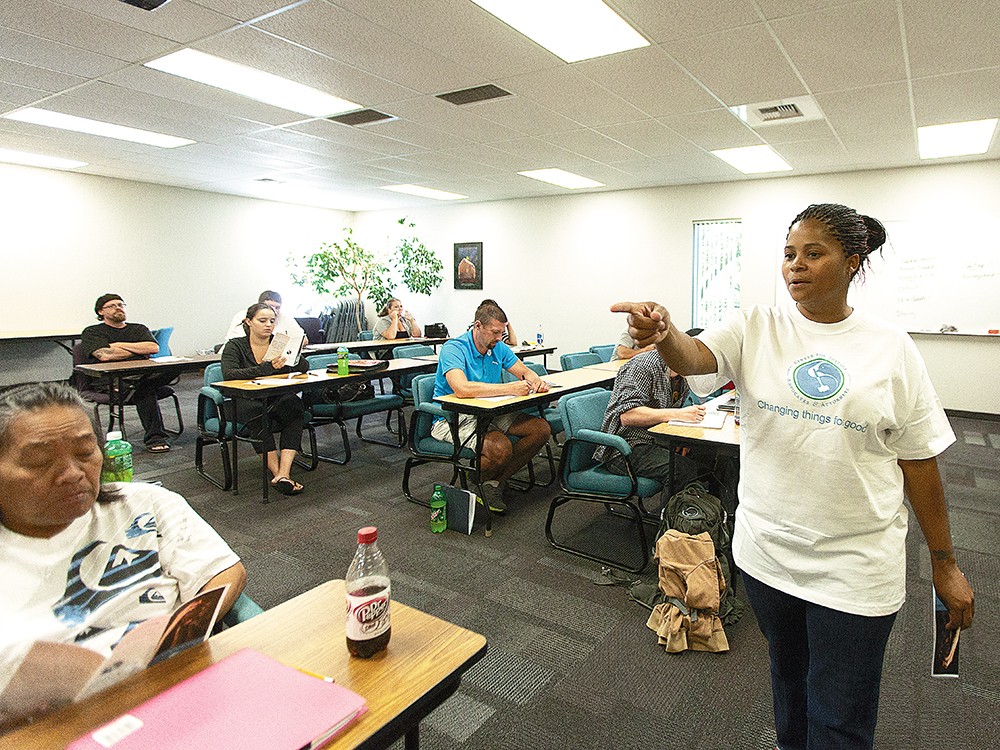 Young Kwak
Herself an ex-offender, Virla Spencer now helps convicts get their driver\'s licenses back.

When Virla Spencer visited district court on work business one day this summer, a woman she didn’t recognize reached through the clerk’s window and grabbed her arm.

Spencer just looked at the woman, confused, until she explained she had heard Spencer speak at WorkSource, where job seekers find help looking for work.

“I got this job because I listened to what you told me and I went for it,” the woman said.

Spencer, who slaps her hands on the table as punctuation when she talks about her work, has a felony for rendering criminal assistance on her criminal record, but has since become a leader at Spokane’s nonprofit Center for Justice. She speaks to people at places like WorkSource, the Community Justice Center, Geiger Corrections Center, shelters and drug rehabilitation facilites about the center’s programs and sometimes about her own story. She had shared something with that woman from the courthouse: a connection few others have.

In 2007, Spencer says she led a life of selling drugs and “gang banging.” A victim of domestic violence “in the middle of a bad crowd,” she found herself involved in a violent kidnapping case in the Tri-Cities. She reserves the details for private conversations with clients, in an effort not to let her past life haunt her. But after 55 days in the Franklin County jail, pregnant with her sixth child, she was released into homelessness. Sharing one cramped bedroom in her aunt’s house with all of her kids, she told herself, “This is it. This is the last straw.”

But as she applied for housing, still pregnant and battling the January snow, landlords running background checks would see the conviction.

“It was almost as if it was stamped on my forehead and there was no way to escape it,” she says.

She finally found housing in an East Spokane apartment building run by the nonprofit SNAP — two days before her daughter was born — and started volunteering at the Center for Justice, where she learned she wasn’t alone. As an AmeriCorps VISTA volunteer, she met clients who couldn’t find jobs or housing because of their past lives.

So in the face of her own struggles and those of every new client she met, she got more involved. The yearlong AmeriCorps program led to part-time and then full-time work at the center. Today, she’s the center’s outreach coordinator and runs its driver licensing program, helping people who’ve had their licenses revoked because of unpaid tickets get their licenses back. In a car-dependent, sprawling society, lack of a license can be the final strike for someone who’s already had trouble finding employment because of their criminal history. The city prosecutor’s office has a similar program, but disqualifies people who have crimes against persons on their records, so the center’s program becomes the last resort for many people. Spencer’s personal experience — she was relicensed through the center — makes her a unique resource.

“These are individuals who have paid their debt to society, and they should be treated like a normal human being,” Spencer says. “People will make mistakes and people have made mistakes. If you’re not familiar with that cycle and that culture, you will never be able to relate or even understand how to serve these people in the way that they should be served.”

Still, there are unmet needs. Spencer says when she tells of her own struggles, women latch on to her. They’ll ask her to be their sponsor, their mentor or just to talk to them. It’s not a responsibility she can take on again and again, so she recently helped start a women’s group at the Center for Justice. The group invites women struggling with everything from mental health issues to body image concerns to depression to meet, talk and journal. They’re connected with each other and with resources, but most of all they’re heard.

Because when you’ve lived the struggles of those in need, you know the value of a kind word or a hand up.

“When I was a client that was hurting who needed somebody to listen to me, I wouldn’t share any of that information until I heard a person that I was able to relate to or connect with,” she says.

Because of her experience, SNAP asked her to join their board of directors. The state Supreme Court appointed her to a statewide committee reviewing legal services for those in poverty. She hopes in five years to have her own business, hiring all “ex-offenders.”

“I want to believe in people who don’t believe in themselves,” Spencer says. “There are not a lot of convicted felons that you see that say, ‘Oh, I’ve completely turned my life around. I’m doing good in the community.’ This is where I am, and I know that’s something different.”