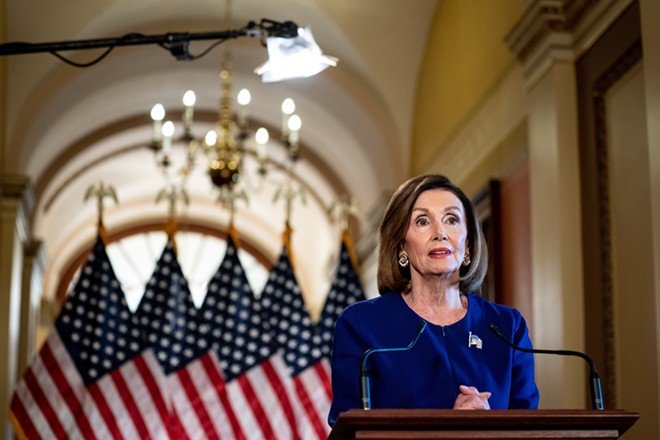 Erin Schaff/The New York Times
House Speaker Nancy Pelosi (D-Calif.) speaks to reporters on Capitol Hill in Washington on Tuesday, Sept. 24, 2019. Pelosi announced that the House would begin a formal impeachment inquiry of President Donald Trump, taking decisive action in response to startling allegations that the president sought to enlist a foreign power for his own political gain.
By Nicholas Fandos
The New York Times Company

WASHINGTON — Speaker Nancy Pelosi announced Tuesday that the House would begin a formal impeachment inquiry of President Donald Trump, saying he had betrayed his oath of office and the nation’s security in seeking to enlist a foreign power for his own political gain.

“The actions taken to date by the president have seriously violated the Constitution,” she said after emerging from a meeting of House Democrats in the basement of the Capitol. Trump, she said, “must be held accountable. No one is above the law.”

The announcement was a stunning development that unfolded after months of caution by House Democrats. Pelosi said Trump’s reported actions, and his administration’s refusal to share details about the matter with Congress, have left the House no alternative outside of impeachment.

At issue are allegations that Trump pressured the president of Ukraine to open a corruption investigation of former Vice President Joe Biden, a leading contender for the Democratic presidential nomination, and his son. The conversation is said to be part of a whistleblower complaint that the Trump administration has withheld from Congress.

Trump said Tuesday he would authorize the release of a transcript of the conversation, practically daring Democrats to try to find an impeachable offense in a conversation he has called “perfect.” Democrats demanded the full whistleblower complaint, even as they pushed toward an expansive impeachment inquiry that could encompass unrelated charges.

“The actions of the Trump presidency revealed dishonorable facts of the president’s betrayal of his oath of office, betrayal of our national security and betrayal of the integrity of our elections,” Pelosi said.

Pelosi said she had directed the chairmen of the six committees that have been investigating Trump to “proceed under that umbrella of impeachment inquiry.” In a closed-door meeting earlier in the day, she said the six would put together their best cases on potentially impeachable offenses by the president and send them to the Judiciary Committee, according to two officials familiar with the conversation. That could potentially lay the groundwork for articles of impeachment based on the findings.