Earth to Bezos: People could use help down here 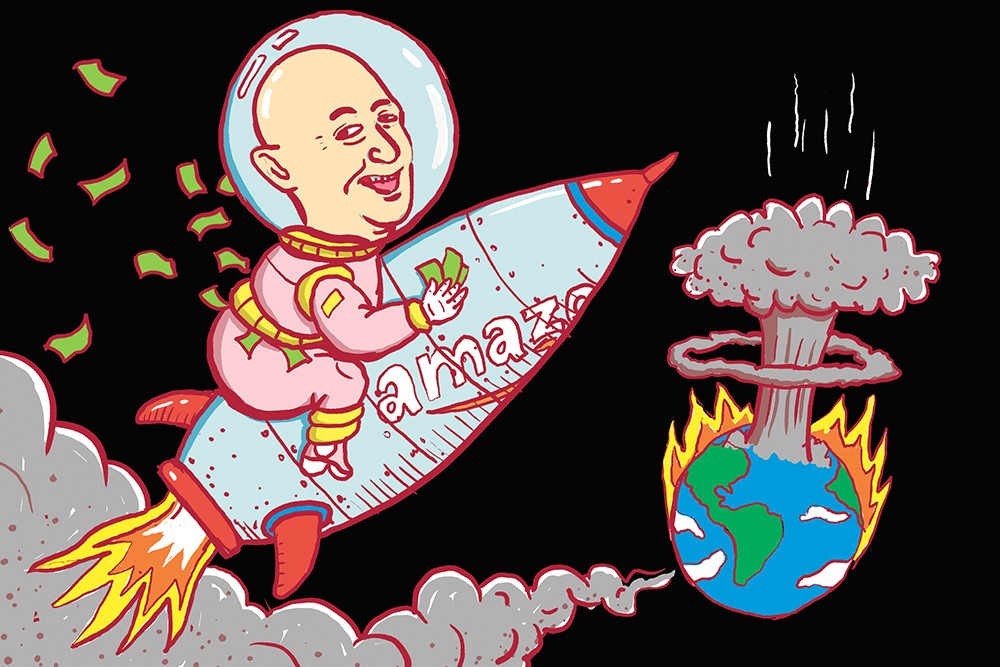 In the early weeks of this year, Jeff Bezos, the founder and CEO of Amazon, became the richest person in the history of the world. His net worth is now estimated at over $130 billion.

It's a ridiculous amount of money. So much money that Bezos himself doesn't even seem totally sure what to do with it. "The only way that I can see to deploy this much financial resource is by converting my Amazon winnings into space travel," he said in a recent interview.

While Bezos dreams of the stars, there are more pressing problems back down here on Earth. For example, in Seattle alone, where Amazon is headquartered, 10,000 people are homeless.

These two anecdotes — a man of unimaginable wealth destined to create a home on Mars and a small city within a city of people struggling to find shelter — are not just random observations from our increasingly economically divided nation arbitrarily paired together by this columnist. Rather they are interconnected phenomena resulting from the same sequence of events.

Amazon's impact on Seattle is hard to fully describe. In part, that's because the two are so deeply intertwined. Amazon has more office space in Seattle than the next 40 largest employers combined. In fact, it makes up nearly 20 percent of all prime office space. The relatively conservative Seattle Times has written that Amazon has turned Seattle into "America's biggest company town."

The biggest difference in the economic boom of Seattle versus Spokane can be attributed to this single company. And while unemployment rates are falling and home prices are rising everywhere, Amazon ensures this is especially true in Seattle.

So Seattle's modern successes and challenges directly stem from Amazon's growth — and one of its greatest challenges has been ensuring affordable housing for its residents. Home prices and rents are rising faster than anywhere else in the country as tech workers fill apartments faster than they can be built.

Seattle's politicians have declared the homelessness crisis a "state of emergency," but so far strong rhetoric has failed to produce significant funding. A report commissioned (and then partially disavowed) by the Seattle Metropolitan Chamber of Commerce suggests that over $400 million is needed annually to address the problem — about twice what's being spent currently by public and private sources combined.

Fortunately, the Seattle City Council is taking action. A bare majority of council members proposed a $500 tax per employee on employers with gross revenues of at least $20 million annually. On Monday, the council approved a compromise plan with a $275-per-employee tax that would generate about $48 million, not enough to fully address homelessness, but a start.

The world's richest man, though, is not a fan. Jeff Bezos' hatred of taxes is near legendary. It's said that he once considered headquartering Amazon on an Indian reservation to avoid taxes and ultimately chose Seattle because Washington state has no income tax.

In response to the initial tax proposal, Amazon halted planning on additional construction projects and suggested that if it were to pass, it may sublease rather than move into some of the office space it's already built.

With the compromise, it's unclear if Amazon will follow through on its threats. Regardless, it's certainly gross to see the world's richest man trying to block a modest tax increase to help some of his city's neediest residents.

But it does raise a question: Would Seattle really be worse off if Amazon's growth slowed down or halted? Couldn't the city use some calming of its real estate and rental markets? And if Jeff Bezos really is blasting off into outer space, might Seattle be better off if he took all of Amazon with him? ♦

John T. Reuter, a former Sandpoint City Councilman, has been active in Idaho's GOP politics and in protecting the environment and expanding LGBT rights.