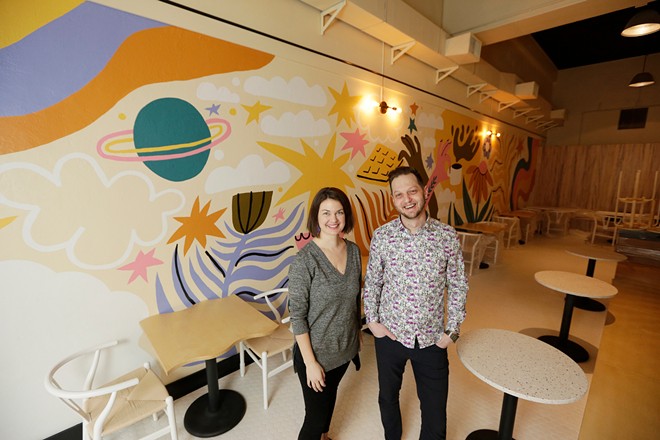 Young Kwak
Alyssa Agee, left, and Aaron Hein, co-owners of People’s Waffle, at their new downtown Spokane restaurant set to open this spring.
The former site of the Observatory bar on the corner of Howard and First (15 S. Howard) is about to become a super sweet new spot.

Moving into the space are two connected, complementary businesses: People’s Waffle and Emma Rue’s, the latter of which is envisioned as a Parisian-themed coffee, dessert and cocktail bar.

Co-owner Aaron Hein, whose partners in the project are Bryan and Alyssa Agee, says both spaces are currently under construction. They plan to open People’s Waffle first as early as March. The sweet-and-savory waffle house was initially launched last year as a food truck, but the trio always intended for it to become a stationary eatery. The waffle-themed cafe is taking over a narrow, northward portion of the space which housed a stage and some seating as the Observatory. Emma Rue’s is moving into the larger south-facing half of the space.

Emma Rue’s, says Hein, “will be elegant. We’re shortening the bar a little because we want to get more seating in there, and we’re doing quite a bit of work on that side because the kitchen was never that big.”

Guests at People’s Waffle can expect to find a mix of sweet and savory waffles, from versions drenched in strawberries and cream to others topped with pork carnitas. Gluten- and dairy-free waffles made from recipes created by Alyssa Agee will also be served.

For Emma Rue’s, Hein says they’re going for a swanky, 1920s-themed art-deco vibe with a palette of deep emerald, black, blue and gold. Plans are to operate as a coffee shop and cafe during the day, switching to a cocktail bar at night.

“We’re going to be doing a nice wine list, and we’ll have appetizers for evening service,” Hein says. “Something I’m really excited about that we’ll be doing is absinthe flights and tastings. It’s going to be very elegant yet still inviting.”

“We’re trying to get it built out and be ready to go so that when things open up, we’re set and poised,” Hein says. “Unfortunately we’ve lost a lot of really great places because of COVID, and we’re lucky we sort of survived that, but we think now is the time to build it because [a return to safe gatherings] is coming.” ♦

The original print version of this article was headlined "Tables Waiting"