Despite national progress, leaders of a local LGBT nonprofit say they’re being forgotten 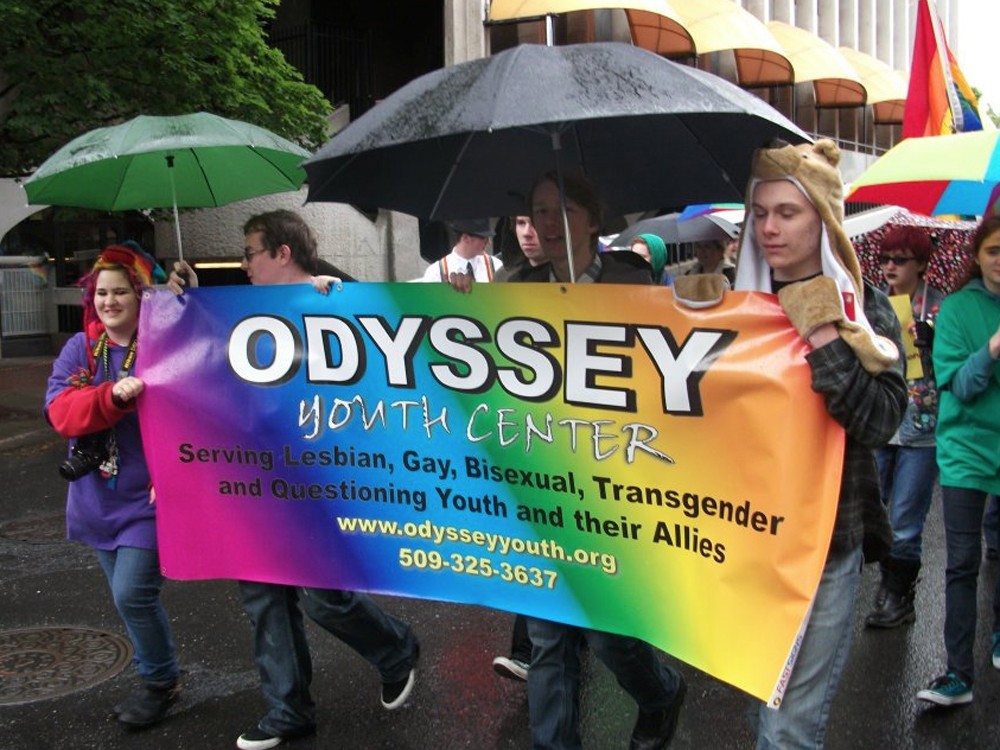 On a hot Friday afternoon, things are picking up inside the duplex at the corner of Perry Street and 12th Avenue. Teenagers pile onto two big, mismatched couches in the living room as others search the kitchen for snacks. In the next room, a tall kid with curly hair is learning to play Pink Floyd’s “Wish You Were Here” on the guitar.

It’s a normal afternoon at the Odyssey Youth Center, which aims to be a safe place for Spokane’s at-risk lesbian, gay, bisexual, transgender and questioning young people; but, by the end of the year, “normal” could look completely different here.

The two-decade-old drop-in center is in serious financial trouble and will have to look at everything it does as an opportunity to save money, board chair Kelly Lerner says. Last week, the group laid off its executive director, and Lerner says the board will spend the rest of the year trying to find more ways to reorganize and cut back. Odyssey won’t shut down, she says, but the board will reconsider every expense — even the building in which it’s housed.

“We’ve been assuming we need a physical space, and I’m not saying we don’t,” Lerner says. “But do we need it or is it a service that could move around?”

The center’s budget is about $100,000 a year, but today it only has about $9,000 left — enough to cover a month’s worth of expenses. The organization hopes to save $40,000 by eliminating the executive director position, and the center is counting on its annual fall masquerade fundraiser to help shore up the rest of the year.

Lerner says that like many other nonprofits, Odyssey is struggling because of a stagnant economy. But she also says supporters are distracted by national and statewide issues.

“I never thought I’d see these things in my lifetime, and it’s so exciting.”

There’s been a flurry of news. In Washington, a referendum to keep same-sex marriage legal in the state, R-74, has raised about $6 million from 11,000 contributors — almost 90 percent of them Washington residents. Last year, the Pentagon repealed “Don’t Ask, Don’t Tell,” which allowed gay service members to be fired if they disclosed their sexual orientation. This May, President Barack Obama announced in a TV interview that he personally supports marriage equality, and the national Democratic Party added support of same-sex marriage to its platform for the first time earlier this month.

“I never thought I’d see these things in my lifetime, and it’s so exciting,” Lerner says, “but it’s taken a lot of focus off the needs of GLBT youth.”

Andy Grow, press secretary for Washington United for Marriage, the group leading the pro R-74 effort, says he has no way of knowing whether his group’s effort is affecting smaller organizations across the state.

“People don’t talk to us and say, ‘I’m contributing to you instead of contributing to them,’” Grow says. “We are seeing a lot of enthusiasm across the state for the campaign.”

Dusti Thurman, program director for the Tri-Cities Vista Youth Center, which operates and gets funding similarly to Odyssey, says her group hasn’t experienced the same challenges. Matthew Wilson, a youth advocate at the LGBT-focused Oasis Youth Center in Tacoma, says his group hasn’t either.

Lerner says she’s only heard from two donors who were pulling back their support of Odyssey because of R-74, but she believes the effort is keeping people from increasing their donations, which is what Odyssey needs as grants become more scarce. Odyssey is dependent mostly on donations from individuals and local organizations, a major shift from its start two decades ago, when it received more government grants and money from big national foundations.

Carla Savalli, the executive director laid off last week, started two years ago and focused on writing grants and finding new funding for the center. She says the economy and the shift to private donations were tough, but today’s predicament is worse.

“It’s the perfect storm of events here,” she says. “People might be making the assumption that we’ve won the battle. That’s a faulty assumption.”