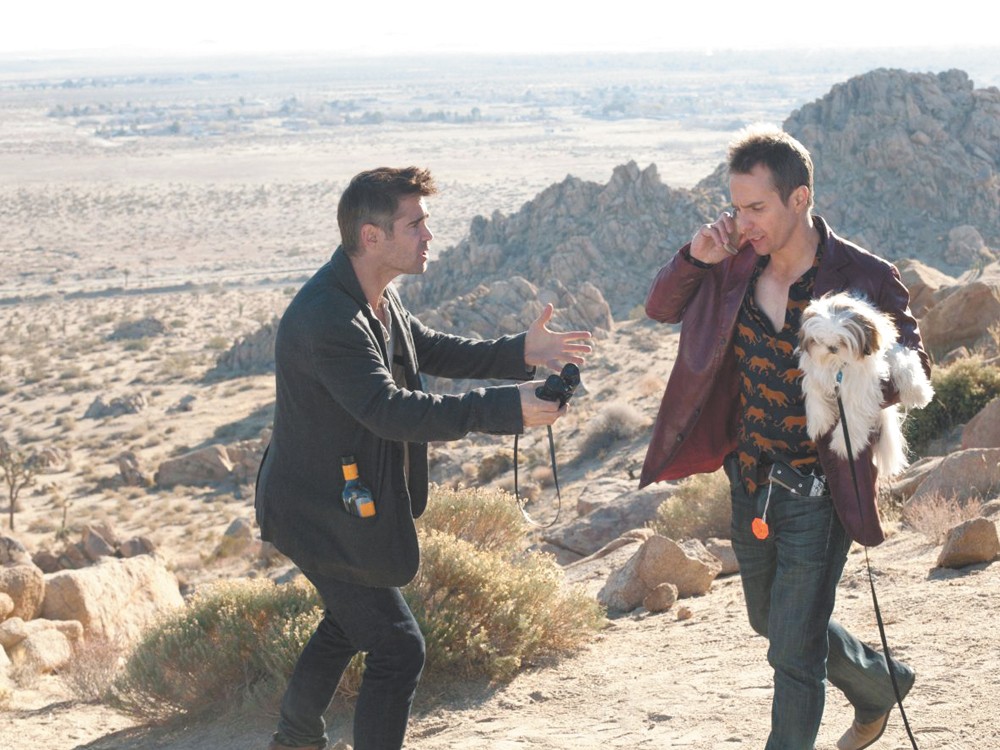 The title says it all, just like Snakes on a Plane and Hobo with a Shotgun before it. But what you don’t get a hint of from the title is that Seven Psychopaths is also smartly written and quite funny. Kind of like its hitman-centric predecessor In Bruges, Martin McDonagh’s first film which, likes this one, starred Colin Farrell.

Here Farrell plays Marty, an often-drunk writer who has a great idea for a screenplay, which he’s titled Seven Psychopaths, even before writing it. The catch is that he’s a pacifist, but his script is loaded with violence.

Marty’s accompanied by plenty of pals and acquaintances and an outsider or two, all of which would make fine models for any psychopaths he’s going to write about.

There’s Billy (Sam Rockwell), a struggling actor who pays the rent by dog-napping pooches in the park, then turning them over to Hans (Christopher Walken), who returns the pets to owners who have posted rewards. There’s Charlie (Woody Harrelson), a vicious hood whose cute little Shih Tzu Bonny is being walked in the wrong place at the wrong time. There’s bunny-loving Zachariah (Tom Waits) who is probably the most dangerous character in the cast. The wonderfully warped storyline has Zachariah answering a newspaper ad that calls for psychopaths who think their real-life story might make good fodder for a film script. And let’s not forget the ruthless, red-hooded mystery person known only as the Jack of Diamonds Killer. Actually, that character is difficult to forget, as many appearances are made, always when least expected.

That’s part of the film’s demented sense of humor. Another is the dialogue. In a bit of gentle, never-mean, racist profiling, proudly Irish Marty is confronted with his “Irish” drinking problem. “I don’t have a drinking problem,” he argues. “I just like drinking.”

Farrell delivers those words with perfect comic timing, and he’s not the only one making great use of acting gifts. Waits knows exactly what to do with his great gravelly voice to get someone interested in hearing his Zachariah tell a story. Rockwell has the opportunity to go completely overboard in the shameless acting department during a nighttime cemetery scene.

The film looks great, especially when the action settles into Joshua Tree National Park. You might want to go back and check out the excellent In Bruges before seeing this one. It’ll give you an idea of how writer-director Martin McDonagh likes to match up the very funny with the very bloody.