Young Kwak photo
The Fox won't be full for the foreseeable future.

Jeff vom Saal has turned his basement into an underground command center. Now outfitted with a massive whiteboard full of brainstorming ideas, a repurposed filing cabinet and a printer he sourced on the cheap from Facebook Marketplace, the space has become the unofficial strategic headquarters for the Spokane Symphony and the Martin Woldson Theater at the Fox in the age of social distancing.

As executive director of the symphony and the venue it calls home, vom Saal, like executive directors everywhere, has been engaged in nonstop damage control since COVID-19 restrictions first went into effect in mid-March.

By now, it's an all-too-common story among performing arts organizations. At first, there was the hope that the initial limits on social gatherings were all just temporary. A few postponements and a little belt-tightening would suffice. It wasn't the venue going dark so much as briefly dimming the lights.

But circumstances kept evolving. And with every change in infection counts and public health guidance, vom Saal and his staff have had to respond in kind. That ultimately led to the symphony's decision to create the only certainty they could. In late July, the entire 2020-21 season — its 75th anniversary, no less — was moved to next year.

"There have been some fits and starts where we thought that the late fall could be a time for activity, and then that sort of got pushed into the early spring. It's hard to capture just what's around the next corner. All of us have had to not just readjust but really recalibrate and reimagine," he says, and that applies to the symphony and the theater alike.

"The organizational impact has been substantial," vom Saal says. "Up until coronavirus hit, I was always very proud to say that we've really grown both the range and the number of concerts, shows and events that we would present at the Fox every year."

Vom Saal estimates that those events numbered over 100 annually. Now they're all on hold, which likewise means that box office attendants, stage crew and front-of-house managers — roughly 150 for any given payroll cycle — are all currently on "standby" along with the symphony's musicians. All that's left is a "barebones skeleton staff of a few people working a very few hours per week."

The organization did secure a Paycheck Protection Program (PPP) loan for $720,000 that will help pay the remaining staff through December. To help ease the budgetary strain a little further, both vom Saal and music director James Lowe forgave their salaries for three months. In July, their pay resumed at a "significantly reduced" rate. Their forgiven salaries are partly being used to pay for 100 percent of the musicians' health insurance as opposed to the usual half.

The audience has played its part, too. Requests for season ticket refunds have been "pretty close to zero." The Symphony Association also set up a musicians' relief fund that has taken in roughly $110,000 in community donations, with $15,000 of that awarded to musicians so far. 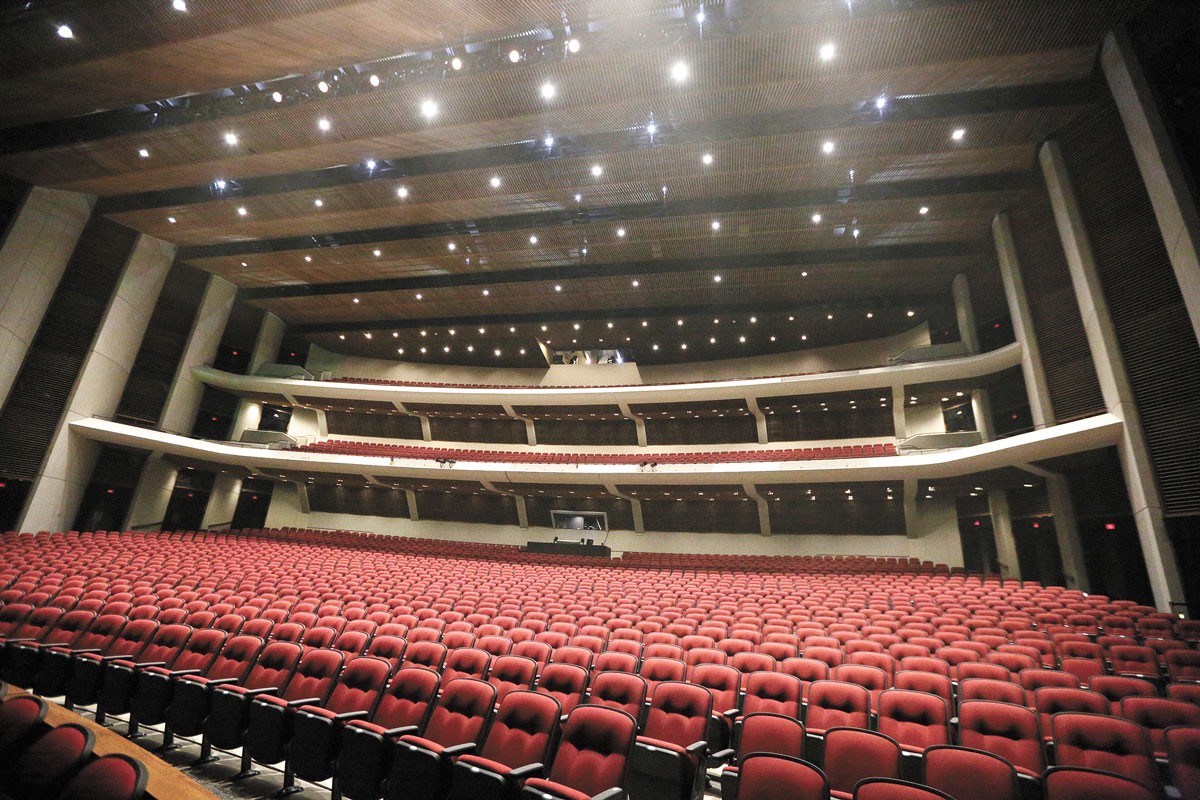 Young Kwak photo
The First Interstate Center for the Arts is pretty quiet these days.

For a municipal corporation like the Public Facilities District (PFD), which manages the Spokane Arena and the First Interstate Center for the Arts, charitable funds and PPP loans have simply not been an option. That's limited the PFD's ability to soften the economic effects of COVID-19.

"As an organization, we did everything we could to keep everybody on and pay full time as long as possible. Even when we had zero events in our buildings, we had part-time staff counting chairs, doing inventories of all of our equipment," says Matt Meyer, director of entertainment for the PFD. More than half of the immediate 55-person staff have since been furloughed, with another 15 reduced to part-time.

Meyer estimates the losses for the canceled or rebooked Spokane Arena and FICA shows to be $4.5 million so far. Given current trends, more are likely to be postponed, and the industry is starting to use the second or even the third quarter of 2021 as its new resumption point.

Echoing vom Saal, Meyer says that the most challenging aspect has been the lack of a stable foundation on which to plan.

"Last week, I had everything ready to go and started getting artists aligned to do an outdoor concert series over in Riverfront Park in the Lilac Bowl. Everything was going to be in line with what the restrictions were at the time," he says. Two days after Meyer thought the event was finalized, the statewide restrictions changed.

In the meantime, he's been holding onto another venue reopening proposal until daily infection counts begin to fall.

If there's a silver lining to be found, it's that the pandemic has encouraged organizations like the PFD to look beyond traditional silos to find new partners. Many of those partners are local, but some include sports teams and stadiums on the other side of the state.

"In my part of the industry, a lot of us are coming together and trying to work through it. There are these relationships we've built during these struggles. In the long run, the relationships are going to be what matters," Meyer says. That has resulted in some "completely outside the box" ideas for safe, revenue-generating entertainment, but he's reluctant to get too specific.

Back in his basement HQ, vom Saal refers to some of his own interim possibilities listed on his whiteboard — things like online streaming performances or small-group concerts — as well as the "pent-up hunger and desire" for live entertainment that he and Meyer are already seeing from both audiences and performers.

"We need authentic optimism, not blind optimism — really looking for the things we can control and that we can imagine together for the future," says vom Saal. "And there will be a day when we look back on this in the rearview mirror. There will be a point when we are extremely busy again." ♦