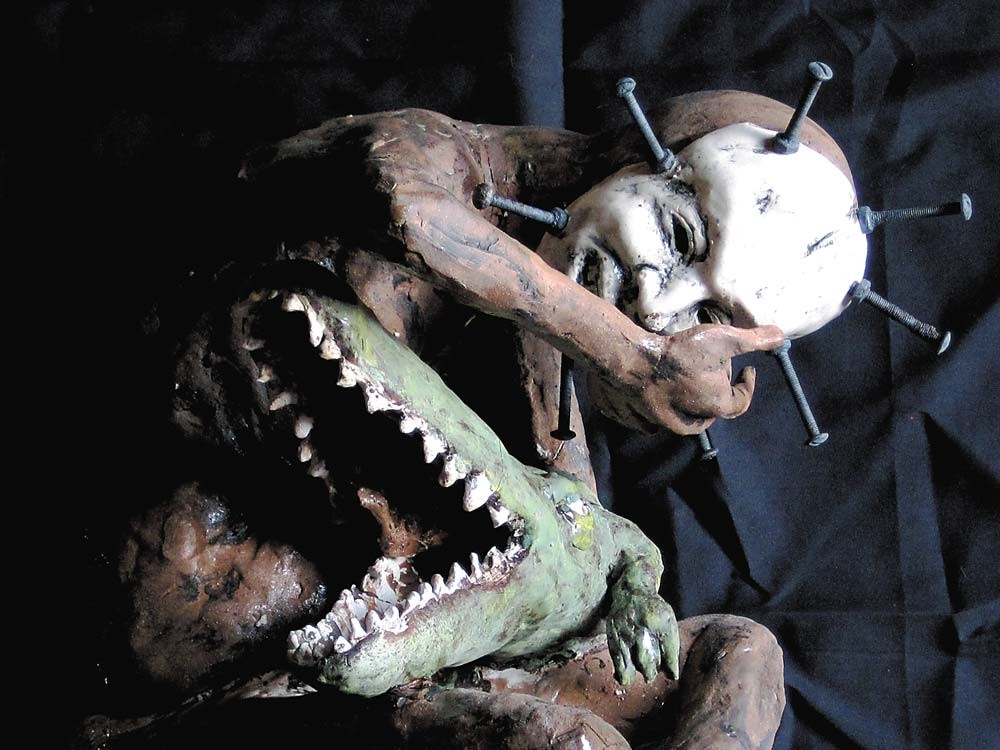 Tiny and terrifying, Matt Boland’s pieces are “dwarfed by pedestals,” but strike fear in our hearts.

Matt Boland thought he was the shit. Then he went to grad school. “I got my ass kicked,” he says. His professors dismantled him, his assumptions about what people wanted, his ideas about the world.

He remembers spending hours painstakingly forming and firing a piece from clay, putting it on display and waiting. “I made things that I thought would speak to people,” he says. The people would walk by, pause for a moment, “they’d go, ‘Huh, alright,’” and move on.

At some point, just before flunking out, he stopped making work that tried to speak to people and started making work that “would expose myself.” It helped. He now makes work that almost exclusively exposes itself: strange, scary, gangly-limbed humanoids in Chuck Taylors and whitey-tighties. Lots of exposed skin. Immediately noticeable, though: opaque white masks that completely cover the face.

His new show is called “Nearly Nude.” It could just as easily be called “Completely Covered Up.” The characters bear it all, but don’t reveal much.

This is a key to the chills they give. They’re repulsive on one level and comical on another. You can’t really stand to look at them, but it’s hard to turn away.

We see this in life, or at least on TV. The scariest and most fascinating event in our recent pop culture wasn’t the Casey Anthony Murder trial or even Anthony Weiner’s half-stock-in-boxer-shorts. It was Charlie Sheen, defiant but emotionally bare, going very publicly insane.

It points to a particular societal fear. We’ll bear our breasts before we’ll bear our psyches. The question Matt Boland asks is a fundamental one. We can look at the tags on our shirts to find out who is clothing our bodies, but who are the tailors of our souls?

We are, Boland thinks, and so is everyone else. The personae we build are beaten on by the world, torn at by other people’s reactions to them and by our own reactions to their reactions.

The best you can hope for is finding the right equilibrium. This doesn’t always mean conformity. Matt Boland’s work got weirder in grad school, not less so.

Like many of his clay people, Boland mostly wears his boyish face in a smile that looks a little pained. This cycle doesn’t end, he says. The best we can do, is keep

asking, “As we fall apart, do we put ourselves back together correctly?”

Also at Saranac: The Art of Work

At Saranac Art Projects, they’re selling the works on the wall for a dollar or five or 10 or 20. Example pieces left over from semester after semester of teaching pointillism and pinch-pots, say. Things that wouldn’t normally be sold. Things that, if a name weren’t attached, probably wouldn’t sell at all.

It’s not an art show as much as a fundraiser.

“We thought it’d be nice to be able to buy a ladder, paint, some light bulbs,” the artist Bernadette Vielbig said one evening last week, fresh off a nap on a sofa in the foyer. This has been the story at Saranac AP, the gallery that, in order to survive, became a cooperative and now, in order to purchase office supplies, is hosting a yard sale.

Vielbig is best known for her found-art sculptures. Next week, she’ll truck years of collected debris — stuff taken from shoreline and snow bank — and “boxes and boxes of different old parts” down to the gallery and then she will 1.) sort objects by color, then 2) sort white objects by size, and so on. She’ll work four days a week, during scheduled hours, taking union-mandated breaks.

“What we do in our studios all day” as artists, she says, isn’t that much different than “the rote tasks of the American factory worker.” This is bound to raise Teamster ire, but she says it from experience. She used to be a factory worker.

At the end of the month, those who find a compelling trinket will be allowed to purchase it at a price along a sliding scale created from standard hourly union wages. If she spent a half-hour sorting the thing, you’ll pay her for a half-hour of her time.

Vielbig doesn’t expect to make much.

She says she has never been paid for her time. When she was younger once, she tried to price her paintings by the amount of time they took. No one bought them. So she priced them to buy, then calculated what her work was worth.

“I could make an hourly wage on a painting if my rate was 25 cents an hour,” she says. She would love to be paid the wage of a pipefitter, but of course many pipefitters — out of work now — are wishing for that same thing.

It’s a bracing bellwether: We used to judge the value of making something by the time we spent on the things we produced. Now the only people making things around here are the artists. People aren’t buying them much, either.