The band's fuzzed-out, taco-fueled music has the local punk scene hungering for more 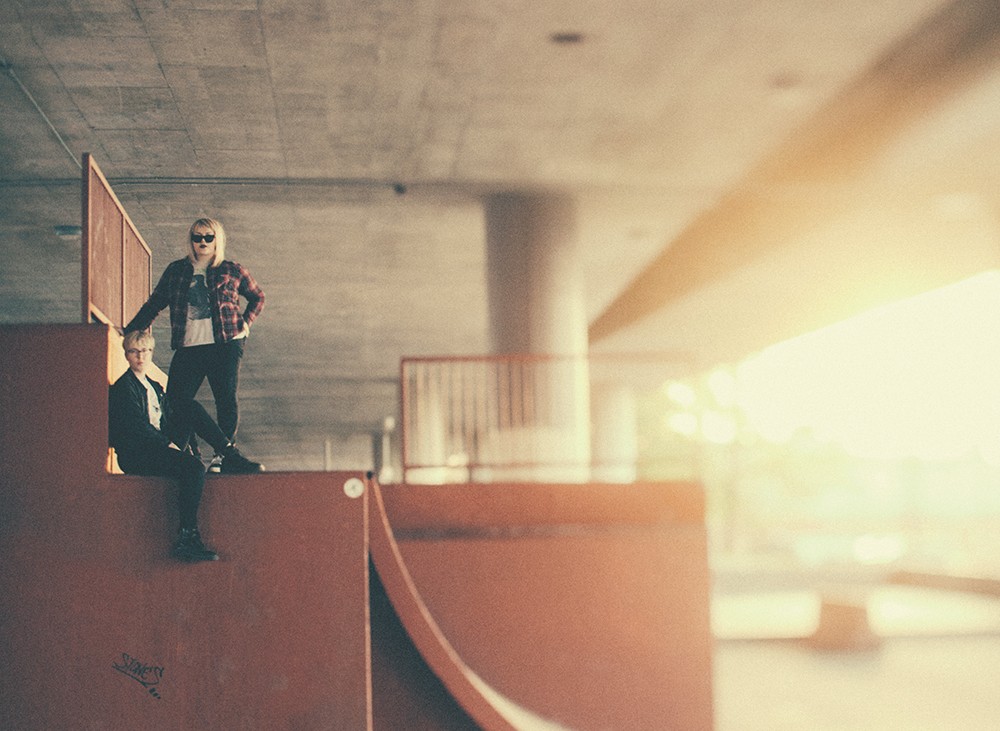 last year and that meant either pack it in or continue to rock sans mic. So there, in the dim garage of the Spokane home she shared with four other roommates, Kendra McKay pushed the microphone aside, wailed on her bass and let out a piercing yell from somewhere deep within her petite frame.

"My ex-boyfriend, who was in the audience, just stared at me," McKay recalls. "He didn't know I had a voice like that. F---, I didn't either."

Today, sitting at Tacos Tumbras in downtown Spokane — a place McKay and bandmate Haili Kiehn now frequent once a week — the ladies discuss important topics like loving tacos, bowl haircuts, people who poop the bed and making music together. McKay, sipping a lime margarita (she's 21) and Kiehn nursing a Coke (she's 20), say that for them, the coolest part of being in a band is getting on stage at a show that's bringing people together.

No one expected much from Phlegm Fatale, they say, given that they were just two, young women on stage, but slowly they've built a fanbase made up mostly of Spokane punk fans (read: males) through riotous house shows and all-ages gigs at Baby Bar and the Big Dipper. After that first gig, McKay wasn't certain she needed a microphone — she could wail the hell out of any room, after all. But soon she found the amplification offered clarity to their music. Over time they've landed on a loud, scratched-out sound that's simple yet refined, with McKay offering the livewire scream to Kiehn's even-tempered crashes.

The pair have been friends since their days at Lewis and Clark High School, but the band was sort of a fluke. Previously, Kiehn had been in a group called Pregnancy Pact. "The name was the coolest part of that band, we couldn't play our instruments at all," she says between bites of her taco. But the other act helped her grow confident behind the skins, working to execute precise rhythms while hitting as hard as she could.

McKay, on the other hand, has played the upright bass since fifth grade and wanted to give the electric version a try. Last January, the ladies started jamming and writing snotty sounding songs together, and it wasn't until they got that first gig where they decided, "we must be a band, then."

Even after a year together, they're consistently asked if they're going to add another member — maybe a guitarist or a keyboardist.

"Why would we do that?" McKay asks. "This is exactly how the band should be."

McKay, the owner of Sandy's Barber Shop on the South Hill since she was 20, says her lyrics are usually about two things: "Boys and boys."

"It's a good thing you can't understand a lot of what I'm saying when I'm singing," McKay admits. "It's usually just a bunch of stuff about ex-boyfriends."

McKay and Kiehn now live together on the South Hill. That means watching MTV's Catfish every Wednesday and taking an interest in professional wrestling. Occasionally, they rehearse too. They say that the performances are what motivate them to write, learn the one cover song they'll play per show (at Baby Bar a couple week's ago they unleashed what was probably the slowest version of Wheatus' "Teenage Dirtbag" ever performed) and admit to being huge procrastinators. But they're currently working on their first demo tape, which they say should be out in time for the duo's Volume performance.

"Girlfriends of ours say to us, 'Oh, I wish I could do what you're doing,'" Kiehn explains. "And the only difference between them and us is we're doing it. It's not like we're special. More people should be making music in this town."

"We're really not trying to make a statement with our music," McKay continues. "We're just us: smackin' on drums and screaming."♦

Speaking of Bands To Watch 2015 , Volume

We like to say Volume's a music festival for all

We've separated a good chunk of the Volume schedule into categories, which should make your navigation of the festival a whole lot easier