Both are slurp-worthy soups. Both are brothy and noodly. But there's a difference, as every soup Nazi worth his stock knows, between pho and ramen.

Pho (pronounced "fuh" to the delight of profane wordplay aficionados everywhere) is a Vietnamese invention, while ramen is a Japanese transformation of a Chinese import.

The difference starts with the noodles. Classic ramen relies on egg or wheat noodles, where pho uses flat rice noodles.

But the major distinction between both dishes — and the factor that determines a great pho or ramen dish — comes from the broth. 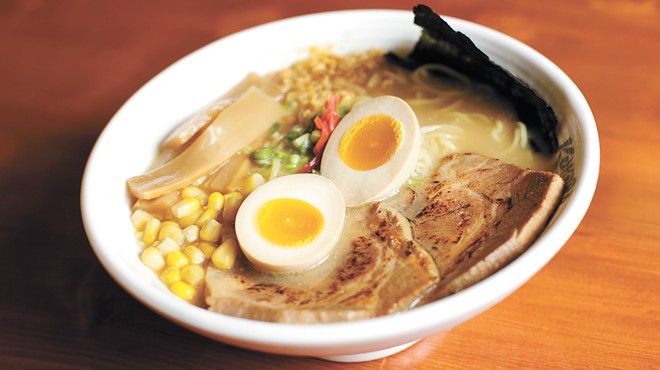 Pho takes a beefy broth and seasons it with the aromatic trifecta of clove, cinnamon and star anise. Ramen broth can vary depending on the type, but you'll start with the foundation of chicken or pork bone stock, complexified with seasoning like ginger, garlic, green onions and miso — a fermented soybean paste.

To pho, add bean sprouts, thin strips of beef, and herbs like cilantro, and — in America at least — lime wedges and jalapeño slices. To ramen, classic toppings include pork strips, seaweed, bamboo shoots and a soft-boiled egg.

And, of course, instant ramen is that beloved staple of bachelor pantries everywhere. Take your Top Ramen to even higher heights by dropping in a raw egg directly after it's cooked and swirling it around as fast as possible with a fork to give the broth a deliciously eggy froth, almost like a savory dessert. Then top it with a dash of cayenne — or, if you have it, Korean gochugaru powder for a bit of heat. ♦

The original print version of this article was headlined "Pho vs. Ramen"

Speaking of The Ramen Issue , Pho