Physicians in the Kitchen 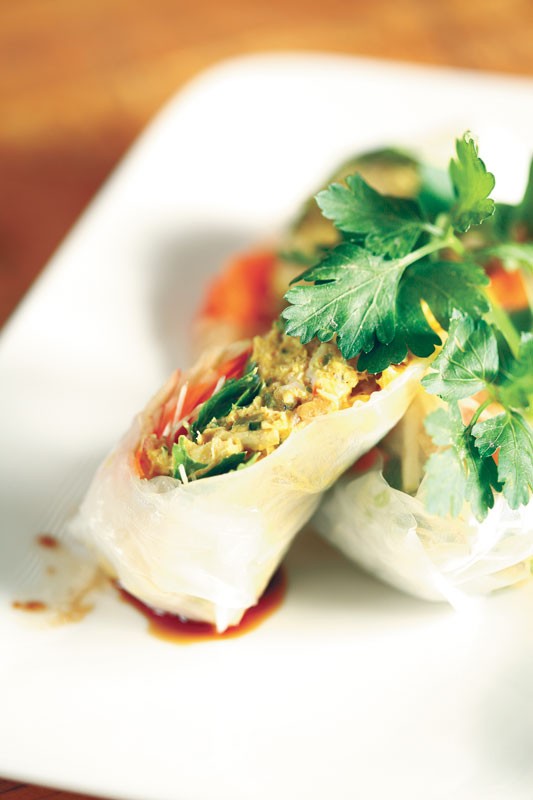 Young Kwak
Chef Curtis Smith has embraced healthy cuisine to deal with his own diabetes; his spring rolls get fiber into the mix with celery, dates, carrots and apples.

For too long, the worlds of the kitchen and the clinic have been separate. Even though the link between food and health is undeniable, the culinary world is largely alien territory to physicians, at least as part of their medical training. And chefs in the past have been more interested in crafting decadent meals and rich desserts than in contemplating the effects of all those ingredients on diners’ health.

That’s all changing, in part because of an initiative by a Harvard Medical School professor, who also happens to be a magician in the kitchen. To spur other doctors to get serious about the link between diet and food, David M. Eisenberg, associate professor at Harvard Medical School and Harvard School of Public Health, started the Healthy Kitchens/ Healthy Lives annual conference at the Culinary Institute of America. The conference attracts about 1,200 health professionals each year, where they learn first-hand about topics as varied as the health benefits of wine to “kitchen knife” skills for surgeons.

In an interview with the New York Times in April, Eisenberg said he would like to see “teaching kitchens” just about everywhere classes are taught — from medical schools to military bases. “What if teaching kitchens were as prevalent as computer labs in schools?” he asked.

Closer to home, there is growing evidence of chef/clinician collaboration. Providence Medical Center Nephrologist Katherine Tuttle had a passion for understanding the effects of dietary protein-induced kidney damage. Along came patient and chef Duane Sunwold, of the Inland Northwest Culinary Academy (INCA), who has kidney disease. Together, they have partnered for the past five years to create tasty cuisine for kidney patients. And now, with Tuttle’s introductions, Sunwold is the chef educator for the National Kidney Foundation.

Another disease with close ties to diet is diabetes. Chef Curtis Smith discovered he had Type 1 diabetes literally on the way out the door to attend the Culinary Institute of America at age 25. When he mentioned how thirsty he had been to his mother, who has been a Type 1 diabetic since her early 20s, she quickly tested his blood sugar. It read 250 points over normal.

“I promised my mom that I’d see a doctor as soon as got to New York,” Smith says. Last spring, Smith, a chef instructor at Inland Northwest Culinary Academy, worked with Rockwood Clinic Endocrinologist Carol Wysham to craft cuisine for people with diabetes for Rockwood’s annual Diabetes Day.

“She’s a wonderful sounding board for teaching diabetic cooking techniques to my students at INCA,” says Smith. Although he has diabetes, and knows a lot about the condition, “At heart, I am a chef. Doctor Wysham’s expertise is invaluable.”

While Type 2, or what used to be called “adult onset” diabetes, may be the result of weight-problems, Type 1 diabetes is an auto-immune disorder that affects three million Americans. The disease essentially shuts down insulin production in the pancreas. Insulin helps the body process sugar, and that means managing diabetes is an ongoing challenge, especially for a chef, says Smith.

“I’ve learned to manage this disease — even when I was the executive pastry chef at the Coeur d’ Alene Resort. It is a daily battle.”

Smith’s teenage daughter has also been diagnosed with Type 1 diabetes. “We compete to see who has the best blood sugar check-up,” he says, “It’s a friendly competition though. Just like any parent, I’m happier when she wins.”

Along with daily exercise, careful attention to diet helps Chef Curtis Smith control his diabetes. He selected this recipe because it is rich in protein and fiber and also uses lots of fruits and veggies. Foods with ample fi ber help delay sugar absorption, keeping blood sugar levels more stable.

To make spring rolls: Soften one rice paper wrapper in warm water briefly until it is soft and pliable. Drain and gently lay the wrapper on a clean work surface. In the center, lay down about 1-2 tablespoons each of carrot, sprouts, cilantro and apple slices. Spoon in approximately one-quarter cup of chicken salad. Roll up the spring roll while folding in the ends to form a cylinder. Chill until ready to serve. Serve whole or cut in half. Yield: 11 spring rolls

*Thai curry, chile paste, fish sauce and rice paper wrappers can be found at most grocery stores or any Asian/Oriental market.