Inside the pie-centric world of local writer Kate Lebo 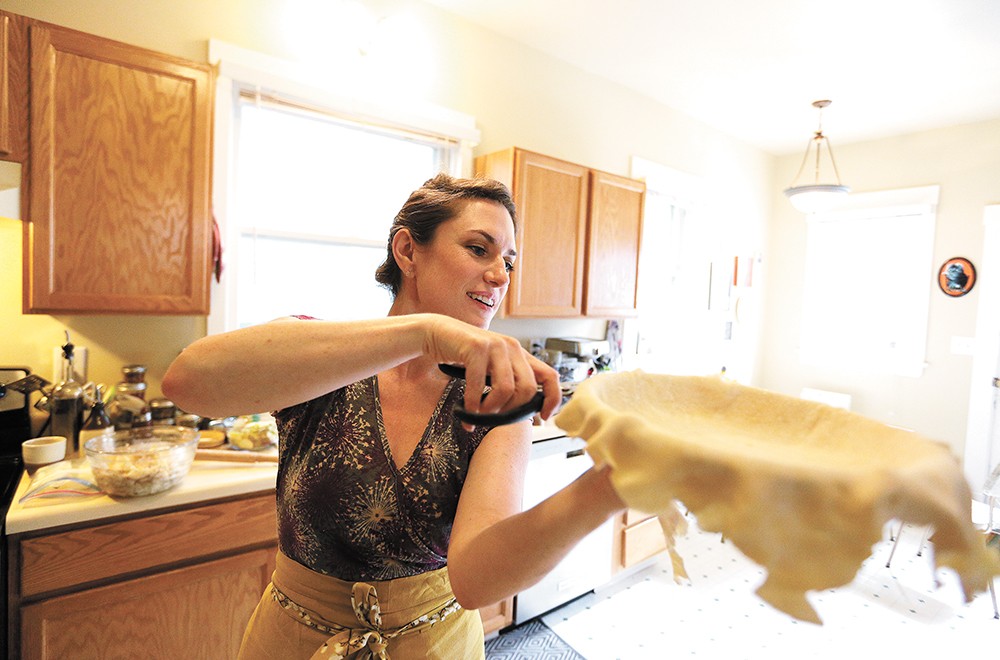 Kate Lebo and I sit at her kitchen table, under a framed Ladies' Home Journal magazine page.

Set within a shopping story, opposite a giant ad for a coffee pot, is one of Sylvia Plath's first published poems.

"The poem doesn't matter so much as the fact that Sylvia Plath valued getting her poem into Ladies' Home Journal as much as into a literary journal," she says. "Both were places she thought were appropriate for poems. I like that Ladies' Home Journal used to also think that. They don't anymore."

I am there to watch Lebo make a pie, and talk with her about her work in the food and literary scene in Spokane. She's the author of two books, A Commonplace Book of Pie, which is a collection of slightly subversive poems about a sweet subject, and a cookbook called Pie School. These days, she teaches pie-making classes around the Northwest, including at Pike Place Market, piecing together an entrepreneurial living so that she can write essays and books (not all of them about food). Sometimes you can catch her working the Batch Bakeshop booth at the South Perry Thursday Market. 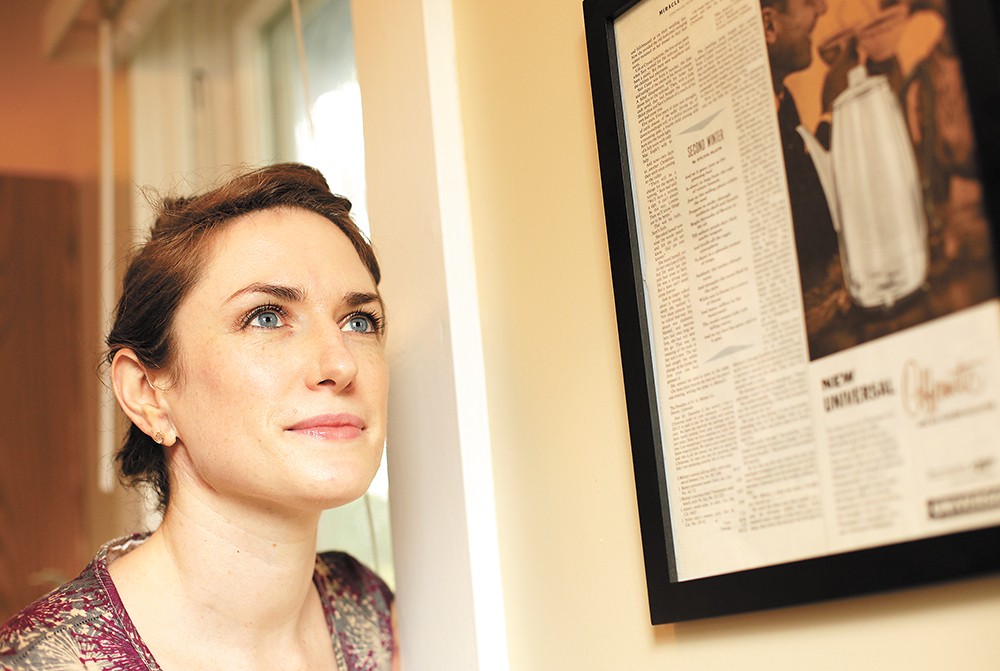 Kate Lebo next to a framed poem by Sylvia Plath from Ladies' Home Journal.

Her first introduction to Spokane was as a collaborator on the popular Pie & Whiskey event held annually during the Get Lit! festival. (She and her co-founder and partner, Sam Ligon, are currently collaborating on a Pie & Whiskey book of essays, poems, fiction, and recipes set to be released in fall of 2017). She moved to Spokane from Seattle in February of last year.

A native of Vancouver, Washington, Lebo went to college in Bellingham, and worked in arts administration in Seattle. She started a food blog in 2008 to find her prose voice. When she wrote about pie, she noticed a difference in reader response.

Although the blog ended when she began graduate school, pie became an obsession, and also her calling card. She held the first Pie Schools at Dani Cone's High 5 Pie shop (then on Seattle's Capitol Hill), learned some tricks of the trade with Kate McDermott, a highly regarded pie teacher, and visited the American Gothic House in Iowa, where she connected with Beth Howard, also a well-known pie guru. Her first teacher of pie making, Lebo is quick to point out, was her mother. "As it should be," she says.

She bakes apple pie, her favorite, during my visit. She'll only make it when the apples are in season (this batch is fresh from Green Bluff). "And then no more apple," she says. "I'll refuse to make it."

She narrates her actions as she prepares the filling, perhaps not unlike a session of Pie School. She slices the apples thinly with a mandoline, keeping the skins on. "That's part of my secret," she says.

"Do you know about baking apples?" she asks me. I shake my head. "They tend to be heirloom varieties. They won our affection by being easy to store and tasting good when they were baked," she said.

She adds sugar, grinds fresh nutmeg and sprinkles cinnamon, squeezing a lemon over everything. She mixes the filling with her hands, stopping to taste it (a step that militant recipe followers often skip).

"No matter how we try to standardize it, it always resists," she says. We decide it needs more lemon, taste again. She smiles.

"The crust is my other secret," she says. "You'll have to come to Pie School to learn that."

She rolls out the dough and forms it into a crust in a pie pan, adding the filling. The top crust is next, and she lets me pick out a pie bird from her extensive collection. She tells me that, along with slits in the top crust, it's meant to help the pie not to fill with steam and puff in the oven. "That's what I love about baking," she says. "Anything cute must also be functional."

She tops the pie with vanilla sugar and places it in the oven.

For Lebo, the Plath poem on her wall is a reminder of the lines she is trying to walk as a woman who bakes and writes about food as part of her work. She writes, cooks and eats in her kitchen, under that poem, remembering that Plath loved to cook, wrote prolifically, "and she ended her life in an oven."

The timer dings and we dig into the hot hand pie she's made for us to share. With one taste, I understand why they call her the Pie Lady, and why the label is so hard to resist. ♦