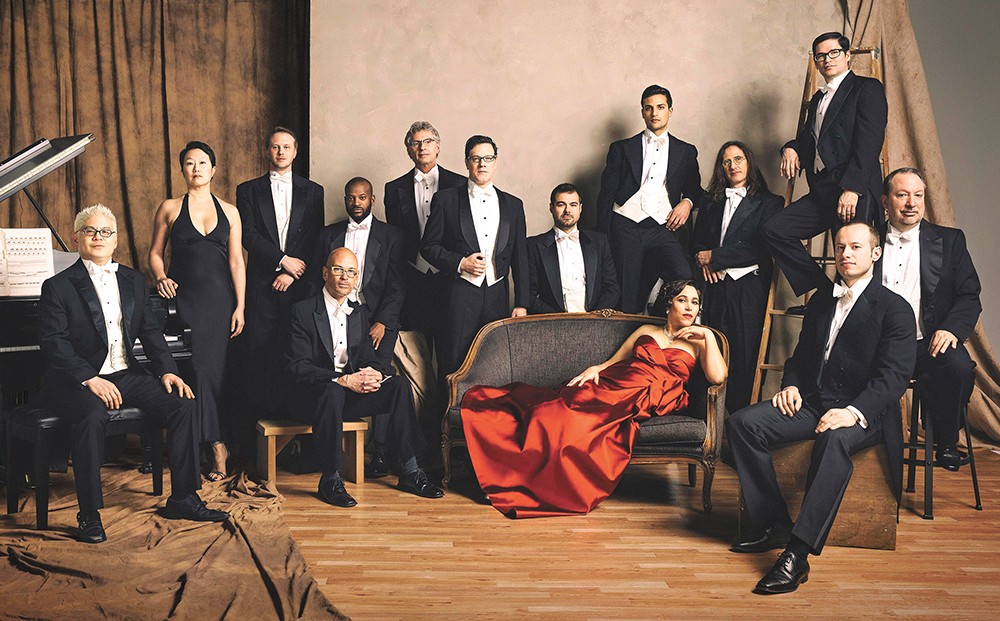 Pink Martini will keep you on your toes with international flair.

Over the past 25 years, Thomas Lauderdale has steered Pink Martini into some pretty incredible places. What started out as a sort of house band for political events in Portland has since performed all over the world, from New York City's Carnegie Hall and the Cannes Film Festival in France, to the Sydney Opera House in Australia and the opening of the remodeled Museum of Modern Art.

While there are many moving parts to this unique musical success story, the engine is unquestionably Lauderdale, a charismatic pianist and composer with a flair for the dramatic and the chops to follow through.

"More is more for Thomas. More instruments. More singers. More everything. He does what he wants to do for the music regardless of whether it makes sense economically or strategically," says China Forbes, Pink Martini's longtime singer and Lauderdale's classmate at Harvard.

The more practical Forbes used to try to balance out Lauderdale's grand visions, she says. Now, she stays out of his way, in part because he has delivered time and again, and in part because the unpredictability is what makes Pink Martini so fun. Lauderdale writes the set list himself and delivers it to the players. Sometimes he brings in unexpected guests. Occasionally, he'll ask the audience for requests and launch into an unplanned medley.

"That's my favorite thing to do, is spontaneously sing songs I didn't know I was going to sing," Forbes says. "Which is why I've been a good singer for this band. Because often we don't know what's happening and I'm kind of OK with that."

In Spokane, you can expect to hear a smattering of selections from across Pink Martini's vast recorded catalog, from the 1997 debut Sympathique, which established the band's cosmopolitan sound, to the most recent album, 2016's Je Dis Oui!, featuring songs sung in French, Farsi, Armenian, Portuguese, Arabic, Turkish, Xhosa and English. No matter the words, Pink Martini's sonic specialty sits somewhere in the spaces between jazz, classical, lounge, Latin music and vintage pop — a combo that makes its global success all the more amazing.

This is, it should be noted, a band that seems to be able to play wherever it wants, whenever it wants, every night of the year if it wanted to. After stopping in Spokane, Pink Martini will play a museum benefit in its hometown before jetting off to North Carolina and then a six-show engagement in Turkey. After that comes a one-off in South Korea, two nights in Hawaii, dates in Canada, France, Belgium, Hungary and Spain, and then a three-night stand at the 17,500-capacity Hollywood Bowl in Los Angeles.

And that's all before the calendar turns to September.

"It's been such a long process," Forbes says. "So on the one hand it feels totally natural, but when I'm really forced to look at it, I do see how unexpected and remarkable it is, because when I got involved, Thomas just had this local band in Portland. There was no record, no touring. That feels like a million worlds away."

In 2019, however, Pink Martini's world is one of "amazing peak experiences," to use Forbes' term, where a concert in a gorgeous concert hall is nestled between playing a top-shelf cultural event and some pinch-me-I'm-dreaming artistic collaboration. It all can be a little overwhelming, Forbes says, which is why the band tries to focus on a mission that cuts across all events, venues and audiences.

"In an unspoken way, I know that we bring joy to people and we bring unity to communities," Forbes says. "We're not out there making political speeches or anything, and there are some moments when you just can't not say something. But we generally try to just lead by example. We are diverse and we're inclusive." ♦

The original print version of this article was headlined "Little Orchestra, Big World"