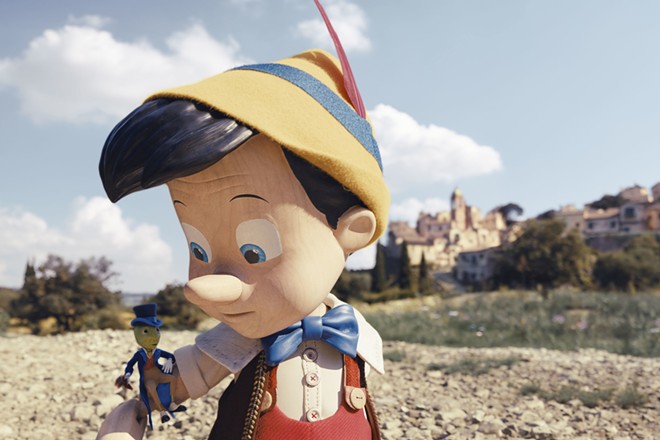 Maybe at one time there was some artistic ambition to Disney's live-action remakes of its classic animated films, but that time has long passed. The more successful these movies have become, the more rigidly formulaic they've gotten, reproducing every element of their source material with a plastic, modern sheen. That's how director Robert Zemeckis approaches the latest Disney retread, his live-action and CGI version of 1940's Pinocchio, which was the second-ever Disney animated feature film.

Zemeckis has long been a filmmaker who pays more attention to technology than to storytelling, and with Pinocchio, he recalls some of the uncanny valley horrors of his motion-capture movies Beowulf and The Polar Express. Pinocchio reunites Zemeckis with his Polar Express star Tom Hanks, but it's not exactly a fruitful reunion for the frequent collaborators (who also worked together on Forrest Gump and Cast Away). Hanks plays one of the only fully human-looking characters in the movie, the woodcarver Geppetto, who longs for a child to relieve his loneliness. Zemeckis and co-writer Chris Weitz add a bit of tragic backstory for Geppetto, who now has a dead wife and son, perhaps so he seems like less of a creepy old man.

As in the 1940 movie, Geppetto's wish for his wooden marionette Pinocchio (voiced by Benjamin Evan Ainsworth) to come to life is granted by the Blue Fairy (Cynthia Erivo), who instructs Pinocchio to learn honesty, bravery and selflessness so that he can become a real boy. To that end, she empowers talking insect Jiminy Cricket (voiced by Joseph Gordon-Levitt) to become Pinocchio's conscience, although he does a pretty poor job of guiding the annoyingly naïve puppet. Pinocchio and Jiminy are rendered as photo-realistic CGI versions of their original hand-drawn animated designs, making them off-putting and grotesque rather than expressive and whimsical.

The same goes for all of the CGI creations that Pinocchio encounters on his various misadventures. Carlo Collodi's 1883 novel has been adapted numerous times with numerous approaches, many of which embrace the potentially dark and disturbing elements. But Zemeckis' film isn't meant to be dark and disturbing, and it follows the established Disney plot, rather than returning to Collodi's original story. The result is the worst of both worlds, a movie that captures none of the wonder and joy of the 1940 film while also failing to update or reassess it in any worthwhile way.

There are a couple of forgettable new songs by Alan Silvestri and Glen Ballard to join Disney staples "When You Wish Upon a Star" and "I've Got No Strings," and there's a new female character for Pinocchio to briefly befriend when he's abducted to join the traveling puppet show run by the tyrannical Stromboli (Giuseppe Battiston). These are minor additions to a movie that otherwise dutifully recreates its predecessor, often verbatim. But choices that made sense in 1940 can be baffling and misguided in 2022. Pinocchio and his mischievous pal Lampwick (Lewin Lloyd) no longer drink beer or smoke cigars, at least, but Lampwick still dresses and talks like a 1940s movie street urchin.

It's become a cliché to cast Hanks as beloved patriarchal figures (he even played Walt Disney himself in Saving Mr. Banks), and his performance here is competent but bland. Gordon-Levitt puts on a bizarre voice somewhere between the original Jiminy's Cliff Edwards and Don Knotts, making the bumbling mentor even more grating. Ainsworth captures Pinocchio's wide-eyed simple-mindedness, and while the harsh moralizing of the 1940 movie is toned down, the message is still strangely scolding. When the lovely animated classic is just a click away on Disney+, there's no reason to watch this version instead. ♦