NATION: One family in Alabama lost seven of its members in a recent tornado.

NEWS: As many as 4,700 defendants in jails across Washington state are eligible for pretrial release. The potential savings could save taxpayers between $6 million to $12 million a year.

Why not an armed takeover?
If kids want to get support from the Idaho Legislature, maybe they should join an armed rebellion against it, the Spokesman's Shawn Vestal suggests. Vestal points to state official's chummy behavior with anti-government groups and its seeming lack of care toward the welfare of children and teens. More here. 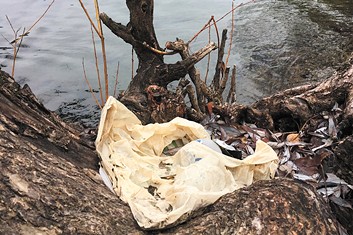 Jerry White photo
It's incredibly common to find plastic grocery bags like this one littering the shore of the Spokane River, says Riverkeeper Jerry White.
Bye-bye bags The ban on single-use plastic bags passes in the Washington state Senate. Next up, the House. (Seattle Times)

Self-vaccination
An Ohio teen who vaccinated himself against his mother's wishes testified before Congress on Tuesday. His mother's ideology was rooted mostly in social media. “I feel like if my mom didn’t interact with that information, and she wasn’t swayed by those arguments and stories, it could’ve potentially changed everything,” he said. “My entire family could’ve been vaccinated.” (Washington Post)