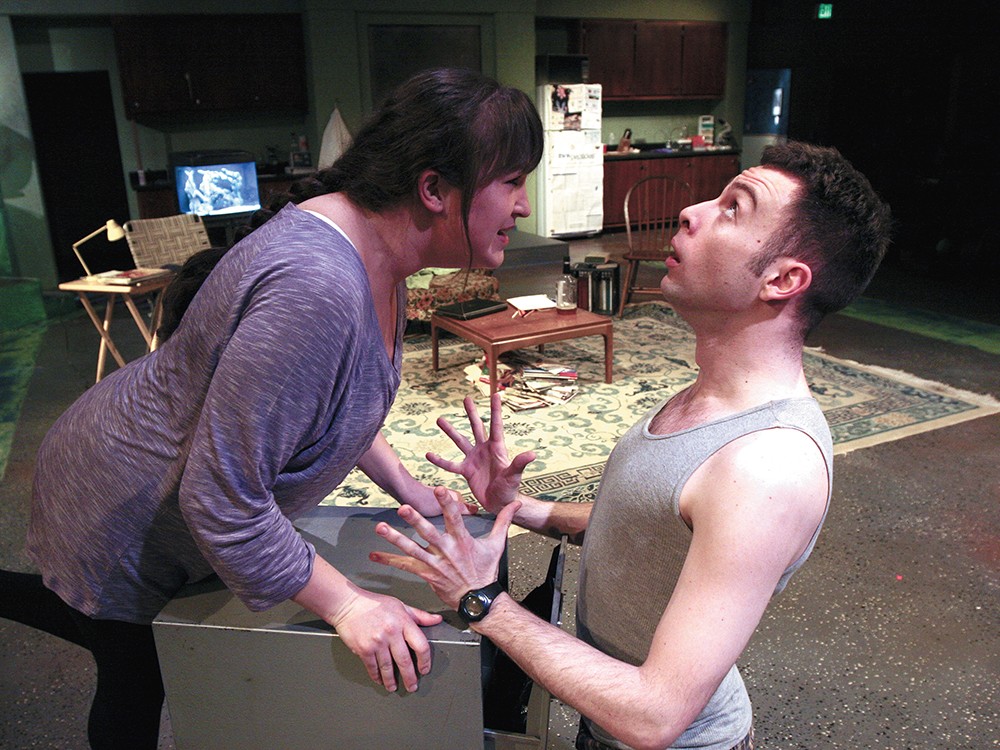 Marhsall E. Peterson Jr.
The end of the world, as seen in boom.

Much to the chagrin of adherents of the Mayan calendar everywhere, December 21 was a day like any other, and so we have to content ourselves with watching other people’s interpretations of the apocalypse instead of experiencing it firsthand.

In his play boom, Peter Sinn Nachtrieb imagines that The End comes in the form of a comet. But the form that The End takes isn’t all that important (hence the lowercase letters of the play’s title). What’s more important is that The End isn’t really the end of anything, rather it’s a beginning. A new fork on the evolutionary path for many species. A new kind of world for them to inhabit. And a new set of theories and myths to explain how it all came about.

Ken Urso, who previously directed Always... Patsy Cline, appears here as Jules, a biologist. He — and he alone, apparently — has identified the course and impact of the impending comet. From his bunker-style basement flat, he’s begun preparing for the catastrophe and the ensuing repopulation of the Earth. His unwitting (and unwilling) partner in this Adam-and-Eve scenario is Jo (Sofie Spillman), a pessimistic journalism student. She’s the foil to Jules’ manic optimism. Where he sees possibility, she sees pointlessness.

Their performance is overseen — for reasons that become clear in time — by Barbara (Anne Mitchell, stepping in for Tamara Schupman at the eleventh hour). She controls Jo’s strange blackouts, freezes the action to offer supplementary commentary, and at one point is so consumed with self-pity that she fails to intervene while Jo attempts suicide. It shouldn’t be hard to spot a theological conceit lurking in all this. Barbara’s role also serves to highlight a crucial shift in the sanctioned origin narrative as her embellished story is phased out by “the management.”

Of all the plays that Interplayers has staged this season, and indeed in recent seasons, boom is the most substantial. At times Nachtrieb’s play is too fulsome in its wonderment toward cosmic dice rolls and Gouldian evolution, but it is entertaining, clever and above all funny, thanks in large part to the pathetic positivity Urso brings to his character.