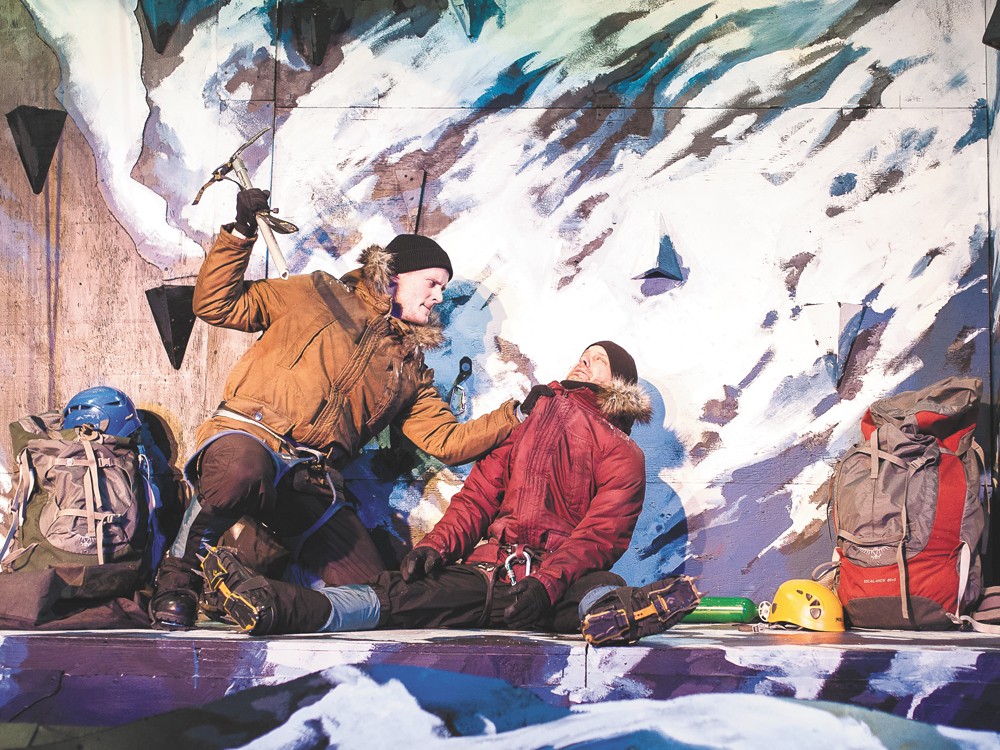 K2 is a fair measure of an actor’s mettle. That explains, at least in part, why Lake City Playhouse plans on entering this one-act, two-man play, ably directed by Troy Nickerson, in this year’s AACTFest competition.

Despite its focus on climbers in a life-or-death predicament on the world’s second-highest peak, Patrick Meyers’ play is light on activity and heavy on existential monologues. Therefore, it’s up to the actors (George Green as Harold, Todd Kehne as Taylor) to engage the audience with this unlikely pair of high-altitude philosophers.

The set is spartan: a windy ledge at 27,000 feet. The two men cut sharp figures against the impressionist swirls of snowy white, shadows of black and cobalt blue. Harold — absent husband and father, physicist on a lifelong search for Meaning (capital M) — has broken his leg and is now immobile. Taylor — a fellow risk junkie and lawyer with social Darwinian views of society — is faced with the grim prospect of abandoning his partner to save himself.

With daylight fading, the climbers’ life-threatening need for action is fraught with the opposite. They make further progress on their descent into oxygen-deprived, frostbitten madness than down the icy rock face. “Mountains are metaphors,” Harold says during his increasingly manic musings. “The higher you go, the deeper you get.”

The locus of their descent gradually shifts to the heart of darkness. There are epiphanies, sometimes cruel. Meyers’ script doesn’t exactly weave these in seamlessly; the words clearly originate with the pen rather than the mouth, rendering them flowery and artificial amid the more believable frantic expletives. Both Kehne (in a markedly different role to his recent one in It’s a Wonderful Life at Interplayers) and Green manage to relate the more affected passages in a way that doesn’t lose the play’s tension and humanity.

K2 ultimately equates the climbers’ ascent to a search for God. The quark — the “method” to the “quantum insanity” that Harold claims to have sought in his education and work — manifests itself in more poetic constants that Harold and Taylor have overlooked in their adrenaline-fueled quests. And all the while, their private drama plays out on the frigid, unforgiving crags of the savage mountain; something the climbers have imbued with infinite significance but which remains impassive toward their suffering and revelations. Mountains are metaphors indeed.